A surgeon finds himself starting over in the middle of nowhere with a mysterious woman helping him to save lives while he struggles to win her heart.  Keep reading to get a tempting taste of The Goddess Gets Her Guy by Ashlyn Chase, then add it to your bookshelf.  In honor of this paranormal romance that’s part of Ms. Chase’s other series, make sure to fill out the form below for the chance to win 1 of 3 copies of this book too! 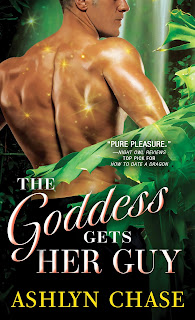 What happens when the goddess meets Mr. Right…but she absolutely can’t tell him who she really is?
After leaving his job as a cardiac surgeon, Dr. Aaron Samuels needs a new purpose in his life. Wanting to help his patients even if he can’t operate, he heads to the Puerto Rican rainforest to find a cure for heart disease. He never imagined he’d meet a beautiful, mysterious woman, especially not one talking to a frog in the middle of the jungle...
Gaia—a.k.a. Mother Nature—has had it with paranormals breaking her number one rule: Never reveal your supernatural powers to humans, not even your mate. Fed up, she transports to the rainforest, happy to converse with amphibians who don’t talk back. But Dr. Samuels is a much better conversationalist, and Gaia can’t wait to help him mend all those broken hearts he told her about.
When her attempts to help only complicate things between them, Gaia begins to wonder what would happen if she opened her heart and was honest with Aaron…and herself. Maybe her number one rule has been wrong all along…
EXCERPT:

An award-winning author, ASHLYN CHASE specializes in characters who reinvent themselves, having reinvented herself numerous times. She has worked as a psychiatric nurse, and for the Red Cross, and has a degree in behavioral sciences. She lives with her true-life hero husband in beautiful New Hampshire.
Find out more about Ms. Chase, and her books, HERE.

a Rafflecopter giveaway
at December 01, 2019