Book Spotlight on A Duke Too Far by Jane Ashford (GIVEAWAY)

A man is left struggling after the death of his sister, but soon finds help coming from his sister’s friend just as the past comes back, along with long-simmering feelings between this pair in this engaging historical romance.  Keep reading to get a tempting taste of A Duke Too Far by Jane Ashford, then start counting down the days until this book hits shelves on April 28th.  In honor of this fourth installment in The Way to a Lord’s Heart series make sure to fill out the form below for the chance to win 1 of 3 sets of the first three books in this series too! 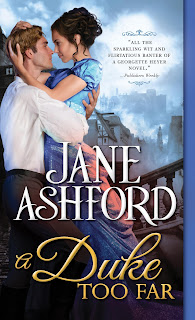 For fans of Mary Balogh and Lisa Klepyas comes a poignant Regency romance full of secrets to reveal and a love to fight for from bestselling author Jane Ashford.
Peter Rathbone, Duke of Compton, is mourning the loss of his sister Delia, but the work of keeping his family's deteriorating estate afloat is never done. When Miss Ada Grandison, a close friend of his sister, arrives with a mysterious letter that she claims holds the secret to saving the family home, Peter is skeptical to say the least...his life is about to get even more complicated.
Ada is eager to do whatever she can to help the Rathbones. She brings clues that Delia claimed would change everything for the family and that lead Ada and Peter on a hunt to unravel the past. But they'll have to face their painful memories—and their true feelings for each other—to discover the truth.

That night, at last, Ada had a different dream. It was just as vivid as the disturbing ones, but the mood was something else entirely. She was at a wedding -- her wedding. She was pacing down the church aisle alone. Where were her attendants? Why wasn’t her father at her side? She felt her gown frothing around her feet and wondered about the flowers on her bonnet. She’d always meant to have roses when she married. Were they there? Her hands were empty. The aisle seemed very long. She walked and walked without seeming to make progress. And she couldn’t see who waited for her at the altar. Which was the most important part, wasn’t it?
She walked faster. The place must be the size of a cathedral. And who were all the shadowy figures filling it, stretching out on either side? She didn’t have nearly that many acquaintances, let alone friends. Multitudes watched her pass. She felt the weight of their attention and wished for a supporting arm. But there was only herself and the endless aisle.
Finally, finally, she reached the front of the church. But the two who waited there—the groom and the vicar presiding—remained vague, mere outlines. “Who are you?” she asked the former. It wasn’t fair. A dream shouldn’t leave out the crucial piece.
Her question had no effect. Though she peered and peered, she couldn’t see. The ceremony took place. Or maybe it didn’t. There were gestures and perhaps words, but Ada couldn’t hear them. She wasn’t certain whether she spoke. Her throat felt tight. The guests had vanished. Most of the church had as well. The edges of her view had gone misty. “Why can’t I see?” she complained.
In response, the two indistinct figures at the altar gradually faded.
Ada turned in a circle, searching, but they were gone. Everyone was. She was alone again. And so very tired. She lay down on the first pew, which was now empty. She folded her hands, closed her eyes. A little rest and then she would...
“Miss Ada?”
She wasn’t Miss anymore. Possibly. Or not.
There was a touch on her shoulder. Ada stirred. Ah, there was a gentleman kneeling beside her.
Surely this was her bridegroom, solid at last. She reached out and laced her arms around his neck and pulled him close and kissed him. It was her very first kiss, though she wouldn’t have admitted that to anyone.
She touched his lips with hers, tender, experimental. More of an imagined kiss at first. She raised up a little, pressed closer.
For one startled instant, there was no response. Then his lips softened under hers. His arms came around her and pulled her against him. He was very strong! The kiss deepened. A bolt of arousal shot through her. Passion, she thought. This was what people meant by it. Ada felt as if she was melting, and yet also newly vibrant. Her arms tightened around his neck. She clung to him and to the kiss.
And then he pulled away with a jerk and a wild look. He put his fingers to his lips as if hers had burnt him.
The Duke of Compton pushed Ada back onto a sofa in the Alberdene drawing room. On which she lay instead of her bed. And she had no memory at all of getting here.
Ada blinked, shaking off sleep and the lingering wisps of her dream. She’d kissed Delia’s brother. She’d often wondered during this last year what it would it be like to kiss him. She’d imagined scenes where a kiss might happen. Nothing like this one, of course. But now she knew that it was lovely. The sort of thing one would like to try again, when more than half-awake. She sat up. A candle burned on a low table nearby.
“What are you doing?” he asked. “Here.”
Was that one query or two? Ada looked around. The corners of the room faded into dimness—rather like, and unlike, her dream. “I suppose I was sleepwalking again?” The words were half a question. “I don’t remember.” She shook her head. The sleepwalking was a worry. “I dreamed of—” No, she wasn’t going to tell him about the wedding. The thin folds of her nightdress shifted around her, translucent in the light of the candle. She could see her knees through the cloth. One couldn’t get more improper than this. She ought to be mortified, but she felt curiously elated instead. In fact, a bubble of rapturous excitement rose in her chest.
“We must tell someone,” he said.
“That we kissed?”
“No! The sleepwalking. As for the other—“
“The kiss?”
“I didn’t mean...I had no notion—“
“I believe I kissed you,” Ada said. She savored the word. She liked saying kiss, the effect it had on him. She enjoyed flustering the duke, she realized. It was fun. Clearly he had no idea what to say next. “I won’t kiss you again if you don’t want me to.”
“It’s not a case of wanting.” He sounded hoarse.
“So you do want me to?” She longed to hear him say so.
His eyes burned into hers. The desire in them made her breath catch. “You know we can’t,” he said.
It was difficult to know anything at that moment. Ada felt like a child who’d inadvertently teased a tiger.
“This.” His gesture encompassed the dark, silent room, their nightclothes, the mere inches that separated them. “Is so far beyond the line.”
Ada knew the situation was scandalous, but she was still glad she’d kissed him. “You seemed to like it,” she couldn’t help saying.
He stood and stepped away from her. “What I like and what I can offer as a man of honor may not be the same. Most often they are not. I’ve known that since I was fifteen.”

Jane Ashford discovered Georgette Heyer in junior high school and was captivated by the glittering world and witty language of Regency England. That delight was part of what led her to study English literature and travel widely. She’s written historical and contemporary romances, and her books have been published all over Europe as well as in the United States. Jane has been nominated for a Career Achievement Award by RT Book Reviews. Find her on the web HERE and on FACEBOOK. If you’d like to receive her monthly newsletter, you can sign up at either of those sites.