A young woman trying to help her brother overcome his addiction finds herself attracted to the rich boy with a heart of gold who’s desperate for her to see beyond his pretty face and big bank account.  Keep reading to get a tempting taste of Brody: Frat House Confessions by Bethany Lopez, along with getting my impressions of this sweet and sensual romance.  In honor of this third installment in the series make sure to fill out the form below for the chance to win a signed print set of the three books in this series, a mug with a packet of coffee, along with some swag too! 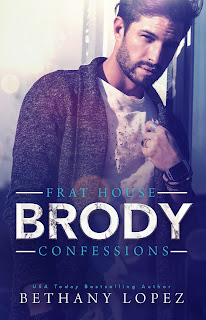 She’s looking for someone with a rich character, not bank account...
Emma’s life has not been easy. Rather than using her disadvantages as a crutch, they have fueled her passion for helping others. She believes in working hard, loves her brother unconditionally, and has no time in her busy life for a certain cocky playboy who has obviously never been denied a thing in his life.
He’s searching for something, but isn’t sure what...
Brody may come across as a fast-talking rich boy with a sweet car. He’s secured a position in the hottest frat on campus and has the attitude of a guy who’s never known what it’s like to go without. So, yeah, it’s a pretty accurate description. But there’s more to the youngest Temple brother than meets the eye.
When Brody keeps showing up in Emma’s world, her initial assumption is that he’s still playing games. As his confessions come to light, Emma starts to see beneath the surface, but is it enough to change her perception of him?  Will Brody finally be faced with the one thing he can’t buy… Love? 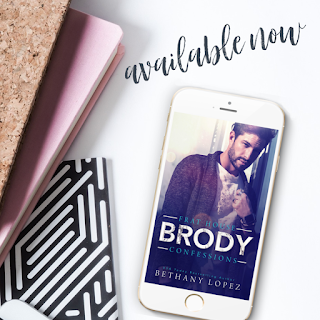 The story of the Temple brothers comes to a satisfying end with this third installment in the Frat House Confessions series as youngest brother Brody tries to win the heart of a young woman who has every reason to distrust him.  These two opposites though, trying to find their place in the world, soon find themselves giving into an attraction that ends up being just what they need.  From the first page to the last readers will quickly find themselves rooting these two on as fate throws them a few surprises along the way before giving them an ending that put a smile on my face.

Brody’s the charming and playful young brother who wears his wealth as easily as a coat, the brother who wants for nothing but love and acceptance after a lifetime of being ignored by parents who only reach out to him when his brothers don’t answer.  On the surface Brody appears happy and carefree, but inside he’s feeling lost and unsatisfied. He’s looking for something that’s just his, something separate from his brothers, which is how he ends up becoming a Big Brother to a charming little boy.  He also ends up closer to Emma, the young woman he can’t get off his mind in a journey that sees them going from reluctant (on her part) friends to lovers.  Through it all I fell even more fully for Brody as his kind heart always shown bright as he was quick to lend help before even being asked.  His interactions with Emma endeared him to me with each turn of the page as sweet and flirty friendship led to more sizzling exchanges.  For Brody, all he wanted was the love and attention of Emma and set out to get just that in this gem of a romance!

Emma’s the kind of heroine you can’t help but admire.  She’s hard working with a big heart that she gives freely to others....others except Brody Temple as she thinks he’s nothing more than an uncaring rich boy.  Her feelings are a bit understandable though considering he and his brothers had a hand in kicking her brother out of their fraternity for his increasingly nasty behavior.  The fraternity’s actions were justified but love for her brother Crush has her defending him repeatedly.  In this story Crush has returned from rehab and is living with Emma and it’s yet another hardship she has to deal with.  Money’s always been tight for her and Crush and him moping around at home and not working means things are even more of a struggle.  She finds out she’s not alone though as Brody barrels his way into her life, supporting her when she needs it most, in a connection that slowly grew deeper over time.  She might’ve thought Brody was her opposite early on but seeing them together makes it clear how good they are together and how alike they are when it comes to their giving natures.  If anyone’s deserving of a HEA it’s these two and as I turned each page I became even more invested in them and was rooting for them every step of the way.


On a whole this was a sweet and sensual romance with only a bit of angst added to keep me captivated. The friends to lovers theme was a deliciously charming slow burn too that endeared both Emma and Brody to me.  Along with crackling encounters between these two there were numerous exchanges that made me smile too in a romance that was thoroughly engaging.  Along with this delightful main couple were reappearances by the other Temple brothers and their significant others. I loved seeing them, getting an update of their HEAs, and really loved the familial vibe between all of them.  Despite their issues with Crush they wholeheartedly embraced Emma as one of them and it made me want to be part of their group too.  Though this book stands strongly on its own I recommend reading the whole series in order so you can see where each brother came from emotionally and see the groundwork laid for what I hope becomes a spin-off series featuring Crush and Papi. Both men are a bit broken, definitely bruised, and both have left me wanting to see more of them.  Here’s hoping that Ms. Lopez doesn’t leave me hanging for too long as I’ll be counting down the days until we revisit these characters. 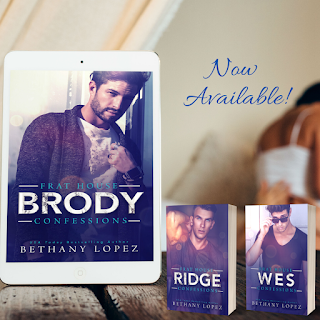 Bethany Lopez is a USA Today Bestselling author of more than thirty books and has been published since 2011. She's a lover of all things romance, which she incorporates into the books she writes, no matter the genre.
When she isn't reading or writing, she loves spending time with family and traveling whenever possible.
Bethany can usually be found with a cup of coffee or glass of wine at hand, and will never turn down a cupcake!