An older woman who enjoys living her life commitment-free, both in and out of the bedroom, finds her attraction to a younger man turning unexpectedly serious in this sexy romance with a bit of humor along the way.  Keep reading to get a tempting taste of Cougar by Elise Faber, along with my impressions of it, then add this second installment in the Chauvinist Stories series to your bookshelf too! 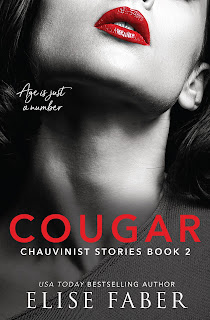 Age was just a number.
Or rather, for Artemis Lang, anything over eighteen was just a number.
She was nearly forty, in excellent shape, with a nice face, and a decided weakness for pretty boys. She also didn’t care if those pretty boys were her age or much younger. A man was a man and she loved men.
But just because she was open to seeing younger men, didn’t mean she was open to a future with them.
Artemis lived her life in temporaries.
Temporary relationships. Temporary production contracts. Temporary lengths of time in different locations around the world.
No ties. No strings.
That was better for everyone.
Except, Pierce didn’t see it that way, didn’t understand they’d had their temporary fun and it was time to move on. Fifteen years her junior, Pierce was a talented young director, lovely on both the inside and out, great sense of humor, and frankly, he had the best set of abs she’d ever seen on any human. But the key word in the previous statement was young.
And circling back to temporary.
Except, Pierce had gotten it into his head that he didn’t want temporary. He wanted Artemis and not just in his bed.
He wanted her in his life...permanently.
The scariest part? Artemis was worried she might want that too. 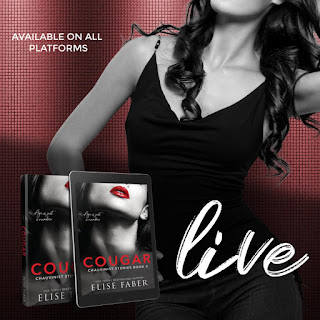 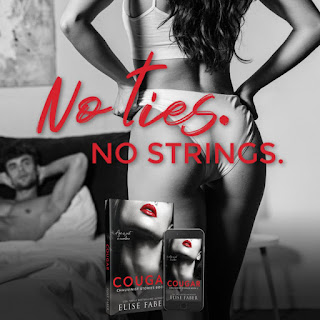 Fans of the older woman/younger man theme will enjoy much about this lengthy journey to HEA.  Featuring a strong-willed woman unafraid of going after what she wants, but who hides behind a painful past, readers will find themselves rooting her on as she starts a relationship with a much younger man.  It’s a young man who’s wise beyond his years and who’s committed to claiming his heart’s desire the moment he meets her in a journey full of steaminess and sweetness that kept me turning the pages non-stop.  While there’s nothing unexpected in this story, there’s still plenty to enjoy in a tale with a likable main couple, witty banter, and sizzling interactions.

Artemis Lang is a commanding presence who has no problem with things that are temporary...both jobs and men.  She makes no excuses for living her life the way she does either.  The moment she meets younger man Pierce though she finds her way of living in conflict with him.  It’s clear she’s drawn to him from the start, even clearer because of their unforgettable one night stand, but it’s a lengthy journey for them as she has to work through a painful past and her damaging preconceived notions about relationships.  Because of the charming Pierce though it’s a journey full of fun and flirtiness, a journey of friends to lovers, and with each exchange the smile on my face grew bigger.

Pierce Daniels is a delightful hero, both sweet and sexy.  He may be young in years but he’s a wise man when it comes to matters of the heart.  He’s full of life and doesn’t let something as inconsequential as age stand in the way of getting his heart’s desire.  It’s that desire that keeps him by Artie’s side no matter how often she tries to push him away and his efforts endeared him to me wholeheartedly.  His family too were just as open-minded and their interactions with Artie made her a part of the family which warmed my heart.  Pierce is a delicious hero and the highlight of the story for me, a highlight that I’m still thinking of as I get ready to dream at night.

On a whole this was a satisfying romance.  Though I wish it wouldn’t have taken Artie six years to fully embrace her HEA, I was still captivated by the journey Ms. Faber put forth.  I enjoyed the witty banter and constant sexual tension, while being equally grateful by their relationship being light on the angst which made this an easy read to while away the hours with.  By the turn of the final page this ended up being another well-crafted romance from Ms. Faber and I look forward to where she’ll take us next! 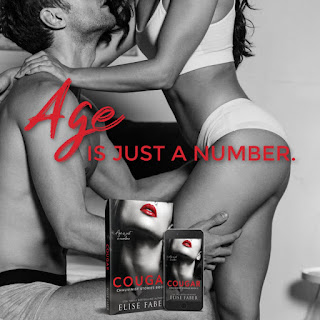 USA Today bestselling author, Elise Faber, loves chocolate, Star Wars, Harry Potter, and hockey (the order depending on the day and how well her team -- the Sharks! -- are playing). She and her husband also play as much hockey as they can squeeze into their schedules, so much so that their typical date night is spent on the ice. Elise is the mom to two exuberant boys and lives in Northern California. Connect with her in her Facebook group, the Fabinators or find more information about her books HERE.