Book Tour for Her Seafaring Scoundrel by Sophie Barnes

It’s a romantic journey a man undertakes to win over his new wife, who’s still in love with the memory of her lost love, in this historical tale that will pull at your heartstrings.  Keep reading to get a tempting taste of Her Seafaring Scoundrel by Sophie Barnes, then add this third installment in The Crawfords series to your bookshelf! 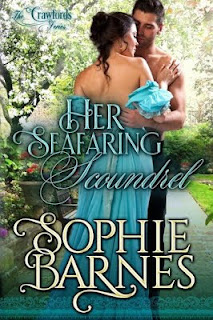 The last thing she wants is a husband...
Least of all one determined to win her heart...
Lady Cassandra has no desire to marry. But when Captain Devlin Crawford brings scandal to her doorstep and offers salvation, she cannot say no. Not with her daughter’s future at stake. So she decides to accept Devlin’s offer, provided he agrees to never being intimate with her. For although Cassandra is drawn to Devlin, she refuses to dishonor the memory of her one true love.
Devlin knows he’s made a mess, but now that it’s done, marrying Cassandra doesn’t seem like the worst idea in the world. Far from it, though it will take serious effort on his part to convince her of this. Especially since she’s never stopped mourning the man she was meant to marry over a decade ago. So once they set off on a grand ocean voyage, Devlin embarks on his greatest adventure yet – the wooing of his wife.

“I cannot believe the duke and duchess would think to invite her.” The speaker had just stepped onto the terrace a few yards from where Devlin stood.
“It is my understanding that she and the duchess are dear friends,” another voice gently advised.
“Well yes. There is that, I suppose. But to not consider the Vernons’ feelings really is bad form.”
There was a small sniff. “Can you imagine having your scandalous daughter make a spectacle on the dance floor for all the world to see? I mean, honestly! She practically threw herself at him, poor man.” There was an outraged snort. “As if Lord Devlin would ever consider marrying the likes of her. The mere thought of it is—“
“What?” Devlin asked stepping forward. He set his glass aside and faced the spiteful shrew. His head felt like it might explode at any given second. In fact, strangling the woman before him was not an implausible outcome. He stared her down while digging his fingernails into his palms. “The mere thought of me marrying Lady Cassandra is what, madam?”
“I…ugh…” The shrew gaped at him as if he were some sort of statue who’d suddenly come to life. And then she said, “I am Baroness DeVries. A lady of the peerage.”
Devlin deliberately grunted, then proceeded to stare her down.
“I don’t believe he cares about that,” the baroness’s friend muttered.
She was right. The only thing Devlin cared about at that precise moment was seeing justice served. Because Cassandra was one of the finest people he’d ever known and she deserved to be defended. Even if that meant forcing the horrid baroness to choke on her own words.
“Yes?” he inquired in an eerily quiet voice that managed to turn his own stomach. “You were saying?”
“Um…merely that…er…” She glanced at her friend while fidgeting with her gloves but when she found no help there, she surprised Devlin by raising her chin and looking him dead in the eye.
“You are a duke’s brother for heaven’s sake and she is nothing but a—“
“Lady DeVries,” Caleb snapped.
“—trollop,” the baroness finished, punctuating her statement with a victorious smile.
What she couldn’t see was the blood rushing through Devlin’s veins or the tight strain of his muscles. Never in his life had he been so livid, and if Lady DeVries had been a man, he would have called her out by now so he could have the pleasure of shooting her dead.
“Devlin,” Caleb murmured from somewhere nearby. “Don’t do anything rash. I beg you.”
But the middle-aged woman who stood before Devlin, dripping with smug maliciousness, had pushed him past all reason. “And what makes you so much better?” he asked.
Lady DeVries gasped. Her friend gulped, took a step back, and then fled back inside the ballroom, abandoning the baroness to her fate. Caleb groaned and Monty managed to get in a weary, “For God’s sake, Dev,” before Lady DeVries recovered and said, “I will not be spoken to in such a rude manner. I deserve better.”
“So does Lady Cassandra.”
The baroness crossed her arms. “Don’t be absurd. She might have been born into the nobility, but she threw all of that away the moment she chose to—“
“Madam,” Devlin seethed, “I would advise you to choose your next words wisely.”
“Or what?”
“Or I shall have to ask you to leave,” Caleb said.
The baroness scoffed – scoffed! – in response to her host’s statement, but Caleb apparently chose to let it go without comment. “Why am I not surprised?” she asked as she turned away and started toward the French doors leading back to the ballroom. But just when Devlin thought that might be the end of their quarrel, she turned back to face him with all the arrogance Devlin despised about the aristocracy. “Lady Cassandra is a fallen woman. When even her parents can see that, I don’t understand why you find it such a hard concept to grasp.”
“Oh, Jesus,” Monty murmured.
Devlin speared Lady DeVries with his hardest glare. “You will not speak of her in that manner.”
“As much as I respect your family, I hardly think it appropriate for you to advise me on how I may or may not refer to a person of such low moral standing as Lady Cassandra.”
Maybe it was the fact that he’d just gotten off a ship after several months at sea, maybe it was the champagne—though he seriously doubted it, or maybe it was the fact that he’d really enjoyed seeing Cassandra again that finally made Devlin come up with something completely unplanned and, quite possibly, cataclysmic. What he did know was that he could think of only one way in which to give Cassandra the stamp of approval necessary to make this woman regret her words.
Blind with rage and as he’d later admit not entirely clear-headed, he ignored Caleb’s words of warning and leaned toward the baroness. Meeting her gaze with all the hatred he possessed for her at that moment, he said, “It bloody well is when she is to be my wife.”
BUY LINKS:  AMAZON  |  BN  |  KOBO  |  iBOOKS  |  GOOGLE PLAY 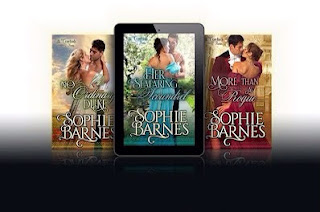 PREVIOUS BOOKS IN THE CRAWFORDS SERIES:

NO ORDINARY DUKE
He’s everything she’s trying to avoid…But somehow precisely what she needs...
Caleb Crawford doesn’t want to be a duke. He’d much rather build houses for a living. So when fate disrupts his peaceful life and burdens him with the responsibilities of a newly inherited title, he does what any sensible man would do by fleeing London, disguising himself as a laborer, and seeking refuge with three young spinsters who need his help with a leaky roof.
Ruined by a marquess who promised her the world, Mary Clemens has sworn to avoid marriage forever. Instead, she intends to live out her days with her friends and the orphaned children they’ve taken into their care. But when Mr. Crawford comes knocking, Mary finds herself in real danger of risking heartbreak all over again. Especially when she discovers that he’s not at all what he seems.

MORE THAN A ROGUE
All she wanted was a kiss...
What she got, was fiery passion...
Emily Howard knows she is destined to be a spinster. She has accepted this fate, but that doesn’t stop her from wanting to experience kissing. What she doesn’t expect, is for Griffin Crawford, the handsomest man in the world, to do the honors. Or for all her female relations to discover her in his embrace. Naturally, marriage is instantly mentioned, but since Emily knows this is not what Griffin wants, she tries to escape him, her family and the ensuing scandal.
When Emily flees the Camberly ball in the wake of their kiss, Griffin goes in pursuit. He will not allow his sister-in-law’s determined friend to risk her safety for any reason. And risk it she will if she means to return to her countryside home by herself. But the longer he remains in her company, the more he is tempted to kiss her again. If only he could risk falling in love and remain in England forever.
BUY AT AMAZON here. 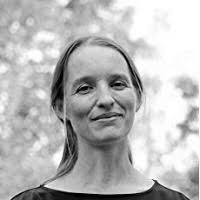 Born in Denmark, USA TODAY bestselling author Sophie Barnes spent her youth traveling with her parents to wonderful places all around the world. She's lived in five different countries, on three different continents, and speaks Danish, English, French, Spanish, and Romanian with varying degrees of fluency. But, most impressive of all, she's been married to the same man three times—in three different countries and in three different dresses.
When she's not busy dreaming up her next romance novel, Sophie enjoys spending time with her family, swimming, cooking, gardening, watching romantic comedies and, of course, reading.