A small town woman who’s looking for excitement finds more than she bargained for as her connection to a bad boy biker takes a suspenseful turn in this tale set in the MC world. Keep reading to get a tempting taste of Temper by Chantal Fernando, along with my impressions of it, then add it to your bookshelf.  In honor of this third installment in the Knights of Fury series make sure to visit the link below for the chance to win a $20 Amazon GC too! 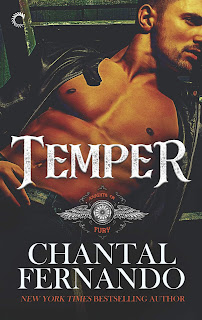 New York Times bestselling author Chantal Fernando returns to the Knights of Fury series with her most complicated hero yet. He may be the epitome of cool, but this MC President isn’t called Temper for nothing...
Every year, the hot, tatted biker comes into Abbie’s bar, orders whiskey, and asks her out. Every year, Abbie turns him down. After all, dating a man that goes by Temper seems like a really bad idea, no matter how attracted she is to him.
But this year is different. Abbie’s different. Older, wiser, and tired of being stuck behind the bar in a sleepy town. This year, she’s ready for whatever adventure the sexy but sweet biker has in store for her.
Or so she thinks…until an elegant candlelit dinner ends with a dead body.
Now, Abbie finds herself on the ride of her life, whisked away to the big city in Temper’s protective custody. She should be scared but—despite his nickname—it’s clear the last thing Temper would ever do is hurt a hair on her head. And when danger catches up with them, Abbie soon realizes that holding tight to her man while straddling a Harley may be the safest place of all. 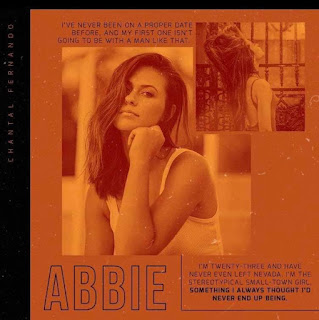 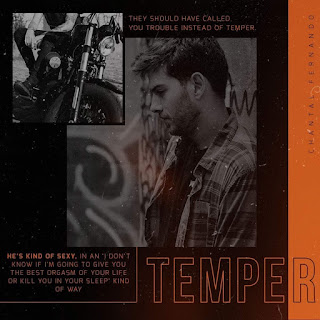 Not having read the previous installments in the Knights of Fury MC series had me concerned that I might feel left out when reading this book, but since MC-themed romances are my obsession I forged ahead wholeheartedly.  And what I found was an enjoyable tale, a bit predictable a time or two but no less entertaining courtesy of an appealing main couple.  Bartender Abbie has led Temper on a merry chase for five years of him asking her out and her saying no...until the one night where she says yes and which takes her on an exhilarating motorcycle ride away from danger and straight towards HEA.  From the first page to the last theirs is a sizzling journey, with a few speed bumps along the way, that kept me frantically turning the pages to see where fate took them next.

Abbie’s an immensely likable heroine.  She was once on her way to becoming a lawyer before her mother’s health issues had her running the family bar instead.  She’s set her dreams aside in order for her sister to live her own life and is the caretaker to a mother who doesn’t appreciate the sacrifices she’s made near enough.  Abbie’s just going through the motions of living, putting everyone and everything ahead of herself, except for those rare nights when the sexy biker Temper comes calling.  He’s given her a chance to break out of her shell over the last five years and she’s said no...until the night she throws caution to the wind in saying yes.  What starts off as a regular dinner out soon ends in a hail of bullets and blood.  To keep her safe though Temper brings her fully into his world and from there she discovers an untapped well of inner strength that made her the perfect addition to Temper’s world. Being with the men and women of the Knights of Fury brings Abbie newfound confidence, makes her a strong support to Temper, and I enjoyed seeing the weight of the world lifted off her just when she needed strength the most.

Temper’s truly a temptation when this story starts, giving Abbie a glimpse of freedom whenever he shows up at the bar and I can’t imagine how hard it must have been to tell him no so many times. Temper’s a bit older than Abbie but has no problem making me drool as he exudes sexiness.  Below that is something even more appealing...a kind and caring heart that’s easily on display when he’s with Abbie. Though he wants to impress her on their first date, he’s left no choice but to kidnap her to keep her safe after she sees something she shouldn’t.  I thoroughly enjoyed the dichotomy of control and kindheartedness surrounding Temper, found him and his actions decadently delightful.  He and Abbie were a match made in heaven and the longer they were together the more formidable their pairing became in a story full of exciting twists and turns.


On a whole this was a very satisfying read with a good balance of steam and suspense.  Abbie was a likable heroine who grew stronger with each turn of the page.  She made a new life for herself amongst the members of the MC, found a new family who unconditionally appreciated all that she was, and her personal journey had me cheering.  Temper’s a dirty white knight with a hidden heart of gold whose connection to Abbie jumped off the pages and had me holding on for dear life, both in and out of the bedroom.  While this storyline is nothing new, it was presented in a way that pulls readers into this couple’s world, from the exciting drama to the appealing secondary characters.  Into a genre that’s already a bit crowded, Ms. Fernando has nicely set up shop with this exhilarating ride into the sunset that has me waiting to see what comes next. 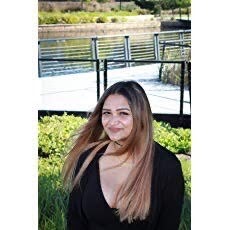 New York Times, Amazon & USA Today Bestselling Author Chantal Fernando is thirty one years old and lives in Western Australia.
Lover of all things romance, Chantal is the author of the best selling books Dragon's Lair, Maybe This Time and many more.
When not reading, writing or daydreaming she can be found enjoying life with her three sons and family.
Chantal loves to hear from readers.