Book Teaser for Wild for You by Kendall Ryan

A recent break-up has a young woman becoming the new roommate of a sexy hockey player just as they discover a mutual attraction that has them soon becoming lovers.  Keep reading to get a tempting taste of Wild for You by Kendall Ryan, the sixth installment in the Hot Jocks series, then start counting down the days until this romance hits shelves on April 20th! 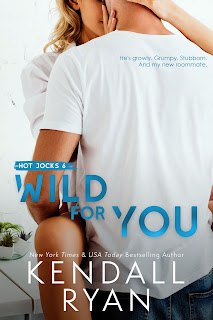 He’s growly. Grumpy. Stubborn. And now, my new roommate.
Walking away from my disastrous last relationship was an easy decision, but moving in with a friend-of-a-friend hockey star who’s rarely home? Not quite as simple, because Grant makes me feel things even I don’t understand.
One thing’s for certain, though. I definitely shouldn’t have crawled into his bed that night.
~~~~~
There’s a brightness to her eyes I can’t seem to look away from.
She’s beautiful. Smart. Tempting.
And a little fragile.
I’ve never been anyone’s knight in shining armor, but when Ana needed a place to stay, it was easy to move her in with me.
Not so simple, though, is keeping my hands—or my mouth—to myself. And the night she crawls into my bed and shares her body with me has me conjuring up all kinds of ideas about our future.
Until a big surprise I never saw coming changes everything.
If you like sexy, confident men who know how to handle a stick (on and off the ice), and smart women who are strong enough to keep all those big egos in check, this series of athlete romances is perfect for you! 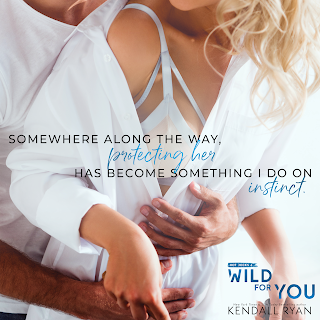 A New York Times, Wall Street Journal, and USA Today bestselling author of more than three dozen titles, Kendall Ryan has sold over 3 million books and her books have been translated into several languages in countries around the world.
Her books have also appeared on the New York Times and USA Today bestseller lists more than 70 times. Ryan has been featured in such publications as USA Today, Newsweek, and InTouch Magazine.
She lives in Texas with her husband and two sons.