Book Tour for A Struggle for Independence by p.m. terrell (Interview & GIVEAWAY)

A woman tired of living by societal norms finds herself attracted to a man carrying many secrets and surrounded by danger.  Keep reading to get a tempting taste of A Struggle for Independence by p.m. terrell, along with getting to know about this author thru a Q and A, then discover more about this book by visiting the other sites hosting this tour too.  In honor of this epic romance make sure to fill out the form below for the chance to win a $25 bookstore GC!

LET’S GET TO KNOW ABOUT MS. TERRELL...

TSP: Knowing what you do now about the publishing business, would you have done anything different career-wise?
PMT: I was discouraged from becoming a writer when I was in school, though teachers and principals did encourage me. If I had everything to do over again, I would have pursued higher education in English Literature and become a professor. I would have remained in the Washington, DC area, but between the English degree and position in education, I believe it might have opened doors for me in the publishing industry. I love teaching and writing, and this would have been the best of both worlds.
TSP: What does your writing space look like, and do you surround yourself with any particularly inspirational items?
PMT: I have an office, and since clutter disturbs me, I tend to keep everything neat. Beside my desk is an aquarium with male bettas, which lends a peaceful and tranquil atmosphere to my office. I have several inspirational posters and pictures. I have surrounded myself with photographs of Ireland, which factors in many of my books.
TSP: Beyond its synopsis, what do you want us to know about this release?
PMT: A Struggle for Independence is the story of a woman’s progression from full dependence on her husband in an arranged marriage to an independent businesswoman. It is set against the backdrop of the 1916 Easter Rising in Ireland. Many times, the changes we experience are not ones we have chosen but are forced upon us, and yet in every calamity, we see some rise from the ashes and become successful.
TSP: Of all the heroes you’ve written, who’s the most heroic in your opinion?
PMT: The most heroic character, in my opinion, is a non-fictional character, Cahir O’Doherty, a man that lived from 1587 through 1608 in Ireland. I wrote about him in Checkmate: Clans and Castles. He was only a teenager when his father died, and he became the last Gaelic King in Ireland. His intellect was well beyond his years. He saved the Inishowen Peninsula from being ravaged by pledging his allegiance to Queen Elizabeth I and later, to King James I. He began O’Doherty’s Rebellion in 1608, which grew out of a dispute between himself and the evil Governor of Derry, Sir George Paulet. He was married to an Englishwoman, had a variety of castles that he moved between, spoke several languages, and was the kind of person I would have loved to have known.
TSP: How has the digital revolution affected your career and how you market yourself? What kind of device do you use for reading?
PMT: I doubt if I could have written the historical books I have without the Internet. I perform the first round of research through historical societies, universities, libraries, and nonprofits through their extensive websites and databases. I then reach out to experts via email. It has saved me countless hours of travel and time in physical libraries. A few years ago, I suffered an illness that left me unable to travel until recently, and I replaced my physical book tours with digital tours that include blogs and social media. It took some getting used to, but I have enjoyed it immensely. I read on the Kindle app on my iPad. I like the fact that I can change the font style and size as well as the lighting. I have been downsizing in preparation for a move, and I have replaced much of my physical bookcases with ebooks. I’m told I can get around 50,000 ebooks on my iPad, and I’m anxious to find out if that’s true.
TSP: My site’s all about favorite things, so what are your favorite things/the things you can’t live without?
PMT: Your question makes me think of the scene in Leap Year, where Declan asks Anna what she would grab if there were a fire, and she had to choose those things that are most important to her. I would most definitely take my dogs first, and then my computer because my whole life is on it, and then my iPad and iPhone. Between those electronics, I’d have all my books, music and photographs, as I have been converting many of my old photos into digital format. 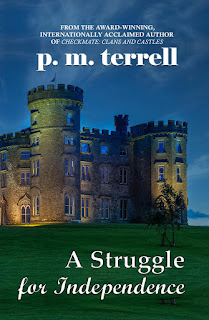 Sometimes a woman comes to the realization that she has built the perfect life but with the wrong man.
It is 1916 Ireland, and Independence Mather has settled into a tedious routine in an arranged marriage when she meets an architect hired to add a wing onto her husband’s vast estate. She soon falls in love with the charming, attentive Nicky Bowers, but he has secrets to hide. When she discovers he is an Irish rebel, events propel her into the middle of the Easter Rising. Now she must decide whether to remain the wife of a British loyalist or risk everything to join the rebellion and be with the man she loves.

As the raindrops fell upon the gatehouse roof, they created a musical melody that was enough to lull me into blissful complacency. The outside world could not reach me here, and I could no longer remember what life had been like before Nicky.
He laid beside me now, his arm pulling me close. His eyes were closed, his breathing regular, the cool air from fresh rain wafting through the open windows to brush away perspiration that had formed on us both. Only his fingers lightly rubbing my shoulder told me he was not asleep but only resting, a brief respite before we made love all over again.
My existence had been permanently altered. I knew that now, and I also knew I was barreling toward a reckoning of which the details were hidden from me, and I could only have faith that this was where I needed to be... and who I was meant to be with.
I did not see Stratford in the mornings as he departed each day at the break of dawn. When he arrived home, I was no more than the candlesticks on the table, a tiny ray of light he would never acknowledge but expected to remain in a given place. One evening I simply did not stand in the hallway when he arrived home, having given Johanna the excuse that I was under the weather should he inquire. But when she reported back to me later, she said he did not ask for me, and from the reports of the others, he went about his dinner as he always did, as though I was seated at the far end of the table.
It was not a relationship; I understood that now. It was a business arrangement; it had always been a business arrangement and nothing more. I had been naïve to believe it might ever turn into something else. Nor did I want anything else with him, I realized. The mere thought of him touching me was enough to turn my stomach. I was thankful for his inability to consummate the marriage.
Nicky squeezed my shoulder and pulled me ever closer to him. My days were completely different from my evenings; I lived for the hours between dawn and sunset. I still took the path along the meadow each morning but an hour or so earlier than I had in the past, and it was not long before Nicky arrived to whisk me away. Sometimes we strolled along the water at the rear of the estate, far from prying eyes. Other times we picnicked beneath the ancient oak, discussing all manner of things. Sometimes we rode our horses to the far corners of Matherscourt. And always, always, we ended up at the old gatehouse. It had become our haven.
The gatehouse was diminutive, but I was serenely comfortable here. The rushing waters under the structure sounded like a constant lullaby, and on days like this with a steady rain tapping against the roof, I felt wrapped in its cocoon. The makeshift bed had been made plumper over time thanks to Nicky overstuffing it, and my contribution had been some bed linens from the house, enough to cushion the top so we could no longer feel pricks from the straw. Someday I planned to stuff it with eiderdown; I simply hadn’t figured out the logistics of that as yet.
Meals, wine, and ale were all brought in a basket, and Léana never once gave me any indication that she was puzzled by my sudden voracious appetite, though she must suspect I was not eating it all by myself. Still, I had grown a bit plumper. I had even managed to move in some old chairs and a table with Nicky’s help, and a few peat bricks kept the fire going.
Yes, we had set up our own little home here, and while I knew we could not expect to live out our lives in a gatehouse on Stratford’s estate, I was content to let the days slip by. 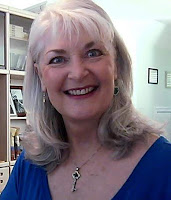 p.m. terrell is the pen name for Patricia McClelland Terrell, the award-winning, internationally acclaimed author of more than 24 books in multiple genres, including contemporary suspense, historical suspense, computer instructional, non-fiction and children’s books.
Prior to writing full-time, she founded two computer companies in the Washington, DC Metropolitan Area: McClelland Enterprises, Inc. and Continental Software Development Corporation. Among her clients were the Central Intelligence Agency, United States Secret Service, U.S. Information Agency, and Department of Defense. Her specialties were in the detection of white collar computer crimes and computer intelligence.
A full-time author since 2002, Black Swamp Mysteries was her first series, inspired by the success of Exit 22, released in 2008. Vicki’s Key was a top five finalist in the 2012 International Book Awards and 2012 USA Book Awards nominee, and The Pendulum Files was a national finalist for the Best Cover of the Year in 2014. Her second series, Ryan O’Clery Suspense, is also award-winning. The Tempest Murders (Book 1) was one of four finalists in the 2013 International Book Awards, cross-genre category. Her historical suspense, River Passage, was a 2010 Best Fiction and Drama Winner. It was determined to be so historically accurate that a copy of the book resides at the Nashville Government Metropolitan Archives in Nashville, Tennessee. Songbirds are Free is her bestselling book to date; it is inspired by the true story of Mary Neely, who was captured in 1780 by Shawnee warriors near Fort Nashborough (now Nashville, TN).
She was the co-founder of The Book ‘Em Foundation, an organization committed to raising public awareness of the correlation between high crime rates and high illiteracy rates. She was the founder of Book ‘Em North Carolina, an annual event held in the town of Lumberton, North Carolina, to raise funds to increase literacy and reduce crime and served as its chairperson and organizer for its first four years. She also served on the boards of the Friends of the Robeson County (NC) Public Library, the Robeson County (NC) Arts Council, Virginia Crime Stoppers and became the first female president of the Chesterfield County-Colonial Heights Crime Solvers in Virginia.