A woman who’s always been the good girl finds herself wanting to be bad in this romance of opposites attracting set in the MC world and featuring a sexy, bearded single dad.  Keep reading to get a tempting taste of Nova by Crystal Daniels & Sandy Alvarez, then add it to your bookshelf.  In honor of this third installment in the Louisiana, the Kings of Retribution MC series make sure to fill out the form below for the chance to win a $20 Amazon GC too! 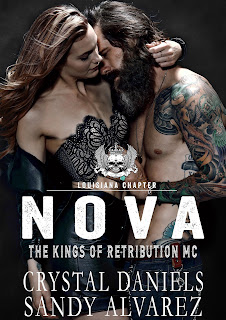 Cain LeBlanc, known as Nova to his brothers, is the Enforcer for the Kings of Retribution MC, Louisiana.
He’s dedicated to the club, but Nova’s entire world revolves around his daughter, Piper. Being a single father doesn’t come without its challenges. Making sure his lifestyle doesn’t affect his home life is one of them.
Never bring a woman home.
That’s one rule Nova has stood by for years.
Until a one-night-stand, with eyes like the ocean, left him wanting more.
After an altercation with another biker, Nova finds himself in trouble with the law. And if the threat of doing time wasn’t enough, Hell rolls into town on a Harley, with a ghost from his past looking for trouble.
Promise Bailey has spent most of her life yearning for acceptance from the only family she has ever known. Which is why she continues to work hard, proving herself as a valuable attorney at her stepfather’s law firm.
Her fiancé commits the biggest betrayal, giving her a new perspective on things, and herself.
Promise realizes her life has become too predictable and mundane.
It’s time for a change.
With the support of her girlfriends and a little whiskey, Promise lets her hair down for a night out to celebrate her newly single status.
One night.
No inhibitions.
No names.
That was all she wanted from the smooth-talking bearded man sitting at the bar. And the stranger was more than willing to deliver.
Little did Promise know she was going home with a member of the local motorcycle club, and how one night of unimaginable pleasure would change her life forever.

"Then, my club has no beef with you." My brother extends his hand, and Crow accepts.
"Let's hope it stays that way." Releasing hands, Riggs stands, but Crow stays seated.
His eyes drop to the table. "There's another reason we haven't left town." His words cause all of us to tense, and his men take it as a threat. Moving forward, their hands reach for their weapons, and we go for our own. I have mine out and the end of the barrel directly in Crow's face before either of his brothers manage to pull guns on us.
"Tell your men to stand down before I put a bullet in your head," I warn him.
"Stand down," he barks, and his men holster their weapons. Unfazed, Crow continues, as he looks to my brother. "I have someone waitin' outside that I'd like you to meet." Then his eyes settle on my face. "L.A," he calls to one of his men. "Bring her in." Crow's eyes never leave mine.
What the fuck kind of games are they playing?
"You got it." His brother, L.A, turns toward the door, but Everest won't let him pass. "Think you could tell the mountain here to move?" He looks over his shoulder.
"I'm not playin' games here, Riggs. My old lady is no threat to you or your club." Crow is quick to reassure us, but I don't give two shits. I keep my gun on the fucker, just in case.
"Let him pass," Riggs orders Everest, and he steps aside. Looking down at Crow, my brother tells him, "Let's hope, for your sake, you're right. I'd hate to see my brother make a mess all over my barroom floor.”
His man L.A opens the door, leans out, motioning to grab someone's attention. A tall, thin brunette steps inside, with her face, cast down to the floor as she approaches. The wringing of her hands as she keeps them clasped in front of her tells me she is nervous.
The moment she lifts her head, I'm staring at a ghost from my past. 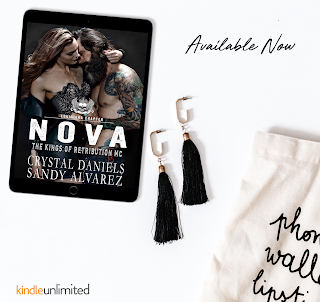 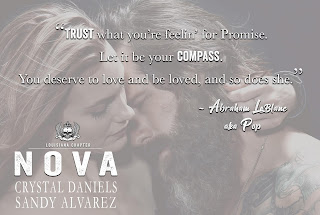 Crystal and Sandy are Indie Authors and the sister writing duo behind several Love and Purpose filled romances. Sharing the same passion for books and storytelling lead them on an exciting journey to not only read all the incredible stories they have loved so much over the years, but to write some of their own.
Since 2017 they have published thirteen books. The Kings Of Retribution MC Series -Undaunted, The Darkest Of Light, Finding Solace, Defy, Unbreakable, Lost King and Prospect.  Also, Leather and Mistletoe, MC Christmas Novella (standalone), Love above Law. The Kings of Retribution Mc-Louisiana Chapter: Riggs, Wick and Nova. Finally, Demetri: The Volkov Empire, and Keeping Denver.
Both were born in the state of Illinois, before moving to Wyoming, where they spent part of their young childhood before moving to Mississippi.
Crystal currently reside in  Mississippi with her husband, their sons and  furbabies.
Sandy currently resides in Mississippi with her husband and their children.