A man cheated on by his ex wife finds himself attracted to a woman with emotional baggage of her own as both of them try to put their fears aside to find HEA.  Keep reading to get a tempting taste of Hidden Baggage by K P Knights, then start counting down the days until this book hits shelves on April 10th.  In honor of this first installment in the Leftover Baggage series make sure to fill out the form below for the chance to win a $10 Amazon GC too! 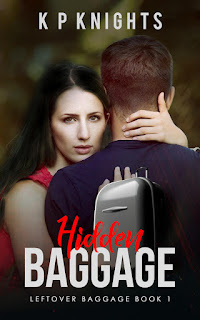 If you’d been burned by love before, would you be willing to take that risk again?
From author, K P Knights, comes a story about heartbreak, second chances, and releasing the baggage from our past.
William ‘Liam’ Anderson had given up on love. His father had arranged a marriage for Liam with a woman he didn’t love, who had cheated on him before leaving him for good. With trust issues plaguing him, Liam embraced his bachelor life and became known as a man-whore.
Sophia ‘Sophie’ Clark had walked away from a previous relationship with more baggage than most people can handle. She’s determined to never let another man try to control her again.
Sparks are ignited as Sophie lands herself as the new advertising executive at Liam’s family’s company. Wary of him at first, Sophie struggles to keep her heart secure from this known bad boy. But, Liam isn’t one to give up. Now, determined more than ever, Liam is set out to win Sophie’s heart and be the man she needs.
Will Liam and Sophie be able to hide their own baggage to allow their hearts to heal? Find out now in this steamy and heart wrenching romance novel today.

"It has everything to do with us,” she burst out indignantly. “I don't even know what the hell I am doing with you. Every fiber in my body is telling me to run as far away from you as humanly possible. You say and do these nice things but in the back of my mind, I’m wondering if this is all some type of game to you. You have a track record of being a man-whore and if I let myself fall for you then I’ll end up hurt or worse. Soon there might be a video of me doing god knows what plastered all over the internet for the world to see.”
Liam was hurt by her words. “A man-whore? Is that what you think of me?”
"A spade is a spade, Liam.”
He bit his bottom lip and gripped the steering wheel trying to contain his anger. Man-whore. He gathered his thoughts. “Okay, maybe I had been a man-whore in the past and banged a bunch of women that I didn't know their names. Yes, I acted immature and childish with my friends sending videos and pictures of my conquests but since I’ve met you I haven't been that person. Since I met you, I haven't wanted to be that person. I like waking up in the morning knowing where I am and not feeling like the scum of the Earth because I lied and degraded some poor girl I’ll never see again. This is not a game for me. You are not a game to me. I like you. I want to get to know you. I am taking you out on a date. I haven't been on a date or even kissed a girl in over two years so that should tell you that this isn't game. The day I met you, I had an opportunity to have a threesome with identical twins, but it was something about you that made me not want to go through with it. What I am trying to say is I would rather have blue balls and be with you than to bag a different woman every night." 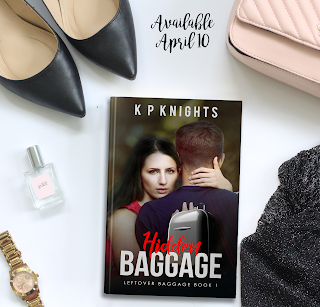 Like Bruce Wayne and Batman, I have two identities.
By day: I am a wife and mother of three. I am also a full-time teacher trying to save the world one student at a time.
By night: I am author K P Knights trying to make the world a better place one book at a time.
In my spare time, I love to read, travel and defy the laws of gravity.