Book Release Tour for Forsaking All Others by Janine Infante Bosco (REVIEW).....

A love meant to be is put through the wringer in this tale of duty, honor, and matters of the heart.  Keep reading to get a tempting taste of Forsaking All Others by Janine Infante Bosco, along with my impressions of it, then add this first installment in the Satan's Knights MC North Carolina Chapter to your bookshelf! 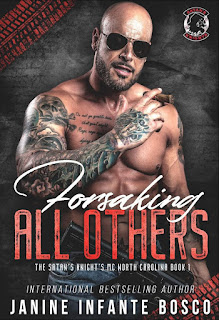 Greed. Power. Sin.
It all comes with the gavel.
Blurs the lines between church and state.
But the Knightdale Charter of the Satan's Knights MC is my life.
And I'd do anything for this club.
Like letting the best woman I ever had slip through my fingertips.
A sinfully beautiful spitfire, she's my better half in every way.
My twin flame. My everything.
My biggest regret.
But there's no making things right between us.
Because I'm the reason she's alone yet again.
And if our past wasn't enough to put out the fire in her soul, my crimes certainly will be. 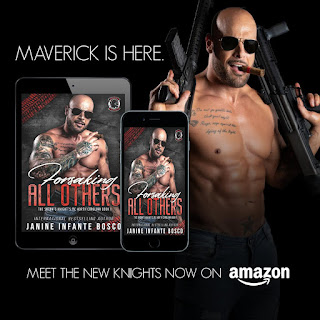 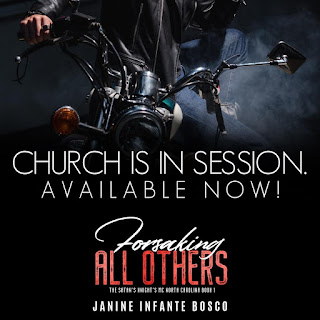 MY IMPRESSIONS OF THIS BOOK:
When it comes to MC-themed romances, Ms. Bosco's the one author I can always count on for an entertaining and emotionally engaging tale.  From the very beginning her Satan's Knights series has been an unmissable read full of steam, suspense, and edge of your seat action.  This latest addition to the series is yet another winner as readers will be hanging on for dear life throughout this second chance romance full of unexpected twists and turns!
Maverick Burnside's life has always revolved around the Club as his father once held the gavel and his brother rode right alongside him.  He learned about loyalty from a young age, loyalty to the Club that transcended all else, and it has him now looking back on a life full of regrets when it comes to matters of the heart.  Mav's a delicious hero, a bit older and wiser, a bit more introspective when it comes to his life and the one who got away because of all the times he chose Club over heart.  He and the woman who's his heart are still in each other's lives and raising their kids together when this story starts despite Holly finding a new love.  Through glimpses of the past readers get to witness all the highs and lows that led them to where they are now, an amicable connection that I found endearing yet full of sexual tension that had me rooting for them to find their way back to each other's arms.  With his kids Mac is especially wonderful, a loving and protective father whose banter made me chuckle a time or two.  Even the little boy not of his blood brought out Mav's sweet side and made me like him even more.  Having lost Holly because of his own decisions weighs on him constantly, but it's clear that he just wants her to be happy. The love he has for her is more than obvious and he'll always be there for her no matter what now in a journey that put me through the emotional wringer.
Holly's a strong-willed heroine, one who knew from an early age that she wanted Mav. They were a formidable pair from the very start, a crackling couple...until he chose the Club one too many times.  Though Holly seems happy when the story starts there are clearly moments of sentimental flashbacks that leave her longingly thinking of Mav.  He was her first love and that clearly still means something to her.  Her interactions with her kids and new man Colt show them to be a strong family unit when the story starts, realistically depicted banter between all of them.  Mav fits right in though, seamlessly, and it leaves readers endlessly hoping for a HEA between him and Holly as the promise of their pairing was more than apparent with each turn of the page.
This was a book teeming with emotions!  It was a romance full of endless sexual tension too that had me rooting for Holly and Mav every step of the way.  It was gritty at times, with surprising twists and turns readers must experience for themselves!  Though this series deals with a new chapter of the MC, everything that happened before has a big impact here as danger is once again rearing its ugly head.  On a whole Ms. Bosco has captivated me with a romance that's a heartwarming oasis in a gritty and dangerous world!
My rating for this is an A.
*I got this book from the author for review in exchange for my honest opinion.

AUTHOR INFO:
Janine Infante Bosco lives in New York City, she has always loved reading and writing. When she was thirteen, she began to write her own stories and her passion for writing took off as the years went on. At eighteen, she even wrote a full screenplay with dreams of one day becoming a member of the Screen Actors Guild.
Janine writes emotionally charged novels with an emphasis on family bonds, strong willed female characters, and alpha male men who will do anything for the women they love. She loves to interact with fans and fellow avid romance readers like herself.
She is proud of her success as an author and the friendships she’s made in the book community but her greatest accomplishment to date would be her two sons Joseph and Paul.
WEBSITE  |  FACEBOOK  |  AMAZON AUTHOR PAGE  |  BOOKBUB AUTHOR PAGE  |  INSTAGRAM  |  PINTEREST  |  TWITTER  |  GOODREADS AUTHOR PAGE
at March 11, 2021