Fans of rockstar romances will be drawn to this sexy and gritty read that will captivate readers from the first page to the last.  Keep reading to get a tempting taste of Play by Kat Mizera, along with getting my impressions of this first installment in the Rock Hard series, then add it to your bookshelf! 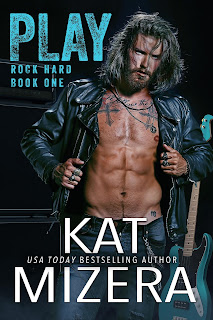 From USA Today bestseller Kat Mizera comes a brand-new series—get ready to ROCK HARD with Nobody’s Fool...
Four sexy rockers.
Four intense women who don't know they love them. Four hard rockin' love stories for the ages.
Tyler Thompson is a bona fide rock star.
He went on tour at seventeen and never looked back. And now, fifteen years later, he has more fame, fortune, and success than he ever imagined. He's the bass player for a new band, Nobody's Fool, and all he wants to do is get back on tour. But business and personal issues are blocking his next move.
Pop star Ariel Fox has been under her father’s thumb for so long she doesn’t remember what freedom is like. When she gets invited to record a single on Nobody's Fool's demo tape she's ready for a week of work...and fun, without the watchful eye of her father. One look at Tyler’s blue eyes and she's immediately snagged. She wants it all—him, success, a real future. But nothing is ever that simple.
Falling in love wasn't part of the deal.
And when the record company tries to sabotage Nobody’s Fool, Ariel must choose between protecting Tyler and protecting herself. 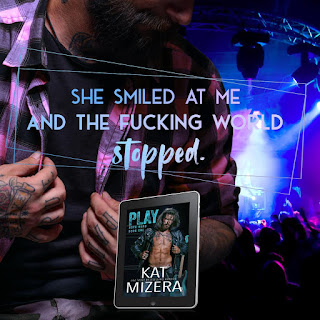 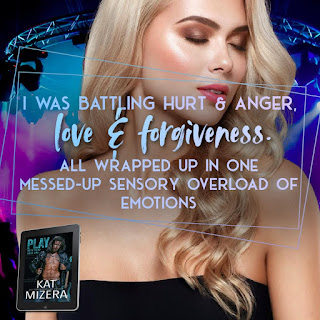 MY IMPRESSIONS OF THIS BOOK:
When it comes to hockey-themed romances I've found the works of Ms. Mizera a wonderful blend of action and romance, a reliable series of books that have always left me satisfied.  I can now add her rockstar-fueled romances to the list of reliable reads courtesy of this series starter full of familiar faces and a main couple who sizzled from the very start.
Tyler Thompson is a familiar face as he was once at the top of the music world before his band's lead singer chose love over fame.  He's ready to start over with a new band now though and it's just one rocky step in a journey to HEA that's full of all sorts of bumpy moments.  Tyler's a rugged and sexy rocker, sweet and supportive too, and just who Ariel needs in her corner.  From their sizzling first encounter to the ups and downs they experience in the public eye throughout their journey, theirs is a romance that had me rooting for them every step of the way.  He may have been leery of love at the start but he quickly found himself entangled in Ariel's complicated life while trying to help his new band find their place in the music world.  He and Ariel ended up being a formidable pair with a romance that frustrated me a time or two but that ultimately left me feeling satisfied.
Ariel Fox is a pop star princess who's had enough of being controlled by her father and his legal moves after a breakdown in her past.  Her situation is reminiscent of what Britney Spears is going through and it had me aching for her as it doesn't seem like there's anyone on her side at the start of this story.  She too wants to start over, wants to be free of her manipulative father, but is scared of making her situation worse.  Seeing Tyler for the first time is like experiencing a breath of fresh air.  He's strong and exudes grittiness, facets she wishes she had, and the attraction between them is more than obvious from the start.  Together they will make beautiful music together in a journey full of emotional highs and lows.  Through it all I found myself cheering Ariel on as she was a sweet young woman, stronger than she thinks she is, who thought that all she could have was a moment of happiness.  Instead she discovered an epic romance that had someone supporting her through every bump in the road in a journey of empowerment.
This was a wonderful series starter with an appealing main couple and their emotionally intense journey to HEA.  This couple started off feeling alone but together they're a formidable pairing, a sizzling connection full of heart and soul.  The issues surrounding Ariel are timely too, and with everything happening in the media now, new insight is given into her life that drew me to her even more.  Alongside this appealing main couple was a cast of equally likable secondary characters.  Some of these characters are ones we've seen before and some are newer. Characters like Stu, Ford, and Bash left behind tempting glimpses of what's to come and it has me excited for their stories to be told! Fans of rockstar romances will definitely want to add this story to their bookshelf as it's a decadently delightful addition to the genre.
My rating for this is an A.
*I got this book from the author for review in exchange for my honest opinion. 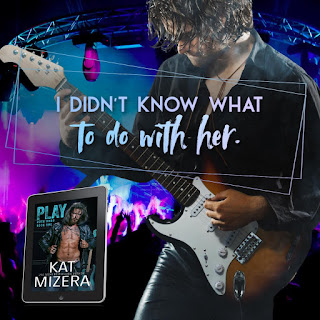 AUTHOR INFO:
Kat Mizera is a South Florida native. Born in Miami Beach with a healthy dose of wanderlust, she's called Los Angeles, Long Island, upstate New York, Massachusetts, New Hampshire and Atlanta home. She's never been able to pick which locale is her favorite, but if pressed, she'd probably choose the west coast.
Kat's a typical PTA mom with a wonderful and supportive husband (Kevin) and two amazing boys (Nick and Max). When she's not writing, she's either scrapbooking or indulging in her second love (after writing) - traveling. Greece is one of her favorite places in the world. She loves that Athens is a big city with a small-town feel. The food, beaches and culture keep her going back as often as possible.
Kat has been a working freelance writer for nearly 30 years. She sold her first article--a review of a rock concert--for $10 in 1985. Since then she's been an entertainment journalist, waitress, bartender, legal assistant, food critic, magazine editor, substitute teacher, and sports writer. She also spent some time working at A&M Records in Los Angeles.
As you can guess from her series, the Las Vegas Sidewinders, Kat loves hockey. She is also a freelance hockey writer, covering her favorite team, the Florida Panthers, and any other teams that have an interesting story. The rest of the time, she writes novels: sexy, romantic fiction that she hopes makes you as happy as it makes her. There's something enticing about hockey players and romance...
WEBSITE  |  FACEBOOK  |  TWITTER  |  BOOKBUB  |  AMAZON AUTHOR PAGE
at March 02, 2021