Readers will be drawn to this erotically charged tale of a boss and his employee who cross all sorts of lines in a romance full of steam and suspense.  Keep reading to get a tempting taste of Midnight Masquerade by Anya Summers, then discover even more about this book by visiting the other sites hosting this tour.  In honor of this first installment in the Dungeon Singles Night series make sure to fill out the form below for the chance to win a $25 bookstore GC too! 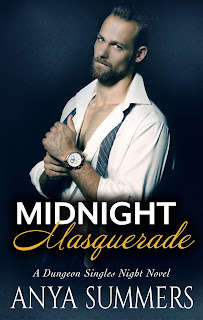 Sophia is in trouble. Again.
Maybe it’s the masks. Maybe she needs to feel something other than regret. Whatever the reason, she is either daring...or foolish...when she trades places with another submissive, and ends up spending the night in her mysterious boss’s bed.
He doesn’t recognize her, but now she’s had him, she knows one taste of his dark love will never be enough.
Gabriel Ryan has one firm rule: don’t sleep with employees.
Even though he’s infuriated beyond measure to discover Sophia in his bed after a night of mind-blowing pleasure, she is now in his blood. He craves her. Needs her. Yearns for her surrender.
But she is forbidden. He will break her with his dark desires.
When Sophia’s dangerous past waltzes into his club, Gabriel must protect her. He must claim her. And break every single one of his rules to keep her safe.
EXCERPT:
When a bell sounded in the club, he swallowed the last finger of whiskey and rose from his seat. Time to get this show on the road. Sophia had assigned him one of his favorite private rooms for the night.
He didn’t spy the woman anywhere as he trod toward the elevator with a group of Doms all heading down a floor to the private rooms. But Sophia tended to flit about and move like a hummingbird from one place to the next at these events. On Monday, he would have to commend her for a job well done. And he really needed to consider giving the woman a sizable raise for all her efforts.
She’d be surprised at how closely he watched her—not that he would ever tell her.
At first, he had watched her to see if she would fuck up, because then he would have to toss her out on her ass. He didn’t suffer fools lightly, especially when it came to his business. But then he had watched her in pure amazement over her ability to transform the two clubs into something magical each month, and make him a hefty profit in the bargain.
It was why he had given her free rein with the Donovan wedding later this month—the first of its kind at his club.
At the door to his private club room, he released a sigh. He didn’t know why he wasn’t more excited at the prospect of a scene with an unknown submissive, but he wasn’t. Although, he hoped that he could provide the submissive awaiting him with what she needed tonight.
Pushing the door open, he strode inside and was brought up short.
A petite blonde knelt at the foot of the bed, her head bowed, knees parted, and palms up on her thighs. She wore a golden corset around her slim torso, that shimmered in the low lighting. The erotic lingerie elevated her already generous breasts up into pillowy mounds and made them appear like an offering. The indent of her waist made him wonder if he could circle it with his hands.
But then her hips swelled out in a smooth curve that had his gut tightening and, surprisingly, his dick sprang to life. Granted, it could be the fact that she wore golden crotchless panties. With her thighs spread, he could see the pretty pale pink lips of her labia and smooth bare pussy.
Bloody hell.
Excitement hummed in his blood. Need thrummed in his veins. And his dick swelled painfully against the confines of his slacks. Perhaps Sophia had been correct, and he needed to be here tonight.
“And who are you supposed to be, beauty?” he murmured darkly, referring to her costume. He approached, rather entranced by the pretty picture she made, and the punch of desire suffusing him. Gabe might have resisted, but in this moment, he was all aboard with the festivities, and eagerly anticipating the night ahead.
BUY LINKS:  AMAZON  |  BN  |  KOBO  |  iBOOKS  |  BOOKS2READ

AUTHOR INFO:
Born in St. Louis, Missouri, Anya grew up listening to Cardinals baseball and reading anything she could get her hands on. She remembers her mother saying if only she would read the right type of books instead binging her way through the romance aisles at the bookstore, she’d have been a doctor. While Anya never did get that doctorate, she graduated cum laude from the University of Missouri-St. Louis with an M.A. in History.
Anya is a bestselling and award-winning author published in multiple fiction genres. She also writes urban fantasy and paranormal romance under the name Maggie Mae Gallagher. A total geek at her core, when she is not writing, she adores attending the latest comic con or spending time with her family. She currently lives in the Midwest with her two furry felines.
WEBSITE  |  FACEBOOK  |  TWITTER  |  GOODREADS AUTHOR PAGE  |  AMAZON AUTHOR PAGE  |  BOOKBUB  |  INSTAGRAM
**********GIVEAWAY**********
a Rafflecopter giveaway