A man whose life changed irrevocably in the blink of an eye finds himself relying on the one person who once adored him from afar in this contemporary romance of second chances in a small town.  Keep reading to get a tempting taste of Love Is Never Lost by Katy Regnery, along with getting my impressions of this modern take on a classic, then add this eighth installment in A Modern Fairytale series to your bookshelf! 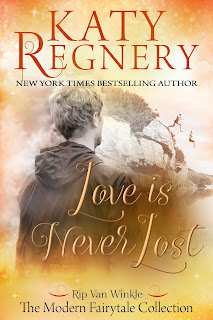 From New York Times bestseller Katy Regnery comes a new twist on the beloved American legend, "Rip Van Winkle."
Sometimes, the journey is the love story.
On the night of his high school graduation, Ripley Van Winkle—local quarterback, prom king and all-around big man on campus—swan dives off the top of the Sleepy Hollow Lighthouse...and lands on a jagged pile of rocks. Suffering massive brain trauma, Rip isn’t expected to live, but he somehow manages to beat the odds: most of his physical injuries heal, though he remains in a deep coma for the next twenty years.
When Rip awakens two decades later, he will need to relearn his body’s most basic functions, in addition to catching up on twenty years’ worth of history, progress and change.
Something called the “internet” has the answer to every question you could ever dream of asking, and people are reliant on mobile telephones smaller than a Walkman. His high school girlfriend is married with children, and he has an eighteen-year-old sister who was born while he was “sleeping.”
As Rip struggles to find his place in this strange, new world, one presence in his life will become both a beacon and guide: his childhood friend, Katrina Van Tassel. But Trina has a challenging adult life of her own, and there’s no guarantee she has space in her life (or her heart) for her one-time high school crush...Rip Van Winkle. 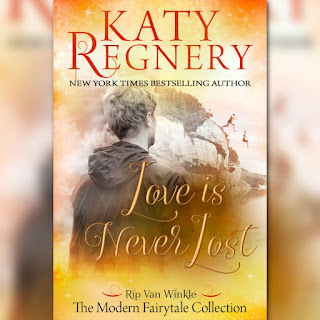 MY IMPRESSIONS OF THIS BOOK:
From the moment I saw the premise of this book I was drawn to it with its clever storyline contemporized for today's readers.  It's a premise that was given surprising depth by Ms. Regenery, far beyond the original source material, to pull at my heartstrings from the first page to the last through a journey of second chances and opposites attracting.
Ripley Van Winkle was the cool kid in high school, the star quarterback, the one who seemed to have everything.  Beyond the facade though was a young man being betrayed by his girlfriend and best friend while relying on the support of his childhood friend who others looked down upon because of her geeky nature.  It was an emotionally difficult time, realistic of growing up in the 80's, with lots of highs and lows due to expectations and matters of the heart.  For Rip, things took an even more unexpected turn the night his fall off a cliff put him in a coma for twenty years.  Upon waking, he has to learn how to live again, learn how to live in a new world while trying to remember the truth of the past to make a satisfying future.  Luckily for him his childhood friend, Katrina Van Tassel, is there to once again support him while staying by his side (as she's done throughout the years) to help him adjust.  With each turn of the page this was an engaging read, one full of heart and soul, that beautifully depicted a friends to lovers connection that slowly creeps up on readers.  Throughout the story I was shown a loving homage to the 80's while getting a contemporary spin on this well-known classic that kept me glued to the pages.  The characters too were immensely appealing, with issues that poked at my emotions, while ultimately captivating me through its heartwarming interactions between Rip and Trina.  It's a delightful addition to a series of books based on other fairytales and is one I definitely recommend to others for its loving and poetic journey to HEA!
My rating for this is an A.
*I got this book from the author for review in exchange for my honest opinion.
AUTHOR INFO:
New York Times and USA Today bestselling author Katy Regnery has a heart for smart romance featuring strong women and decent men. Almost exclusively self-published, Katy claims authorship of almost 50 titles, including three RITA® finalists. Translated into French, German, Hebrew, Italian, Polish, Portuguese, and Turkish, Katy has sold over two million books worldwide.
WEBSITE/NEWSLETTER  |  GOODREADS AUTHOR PAGE  |  AMAZON AUTHOR PAGE  |  FACEBOOK  |  TWITTER  |  PINTEREST
at March 15, 2021