Rockstar romances are among my favorite themes and it's what drew me to this rom-com from the very start.  It's the characters that kept me turning the pages though in a sensual m/m romance that I wish had been longer.  Keep reading to get a tempting taste of Musical Mayhem by Alley Ciz, along with my impressions of it, then add this next installment in the BTU Alumni series to your bookshelf too! 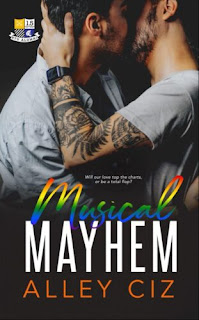 Help Wanted: Producer for the latest album from multi-platinum selling band Birds of Prey.
Enter Sammy Rhodes.
Famed DJ The Spin Doctor.
Musical genius.
Fits with the band like he's our sixth member.
We hired him on the spot.
So what's the problem?
He's also all broad shoulders and dazzling smile, and has this flop of hair I constantly yearn to brush away from his handsome face.
What should have been a match made in musical heaven could decimate my career.
Why?
Because as the front man of BoP, I've been living my life from deep inside my walk-in closet for years. Will I risk everything for love?
MUSICAL MAYHEM is an inter-connected stand-alone BTU Alumni Novella and falls in the timeline as BTU1.5. It is a MM rom-com featuring a devilishly handsome DJ, a ripped rock god, and the Covenette shenanigans you've come to know and love.
*MUSCIAL MAYHEM was previously released as part of THE RULE BREAKER ANTHOLOGY and has been revised and expanded*
BUY LINKS:  AMAZON (US)  |  AMAZON (UK)  |  AMAZON (CA) 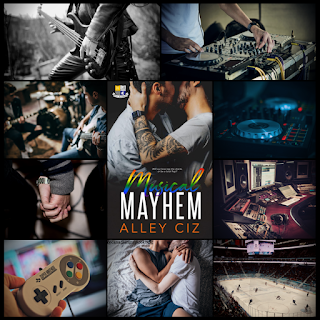 MY IMPRESSIONS OF THIS BOOK:
As a fan of rockstar romances I was immediately drawn to the premise of this novella, but as part of a series I always worry I'll be missing out on all that came before.  Fortunately this is the kind of story that you can pick up on its own and enjoy from the first page to the last.  With likable characters, sizzling interactions, and a bit of angst courtesy of a lead singer hiding his sexuality, readers will find themselves glued to the pages and rooting this couple on every step of the way.  By the turn of the final page I was left with a smile on my face and a heart warmed by this couple's journey to HEA, a journey that has me more than ready to revisit all these characters again soon!
Jamie Hawke is lead singer of the band Birds of Prey, a band who's been together for years and found lots of success.  As the lead singer he's the face of the band, the one who's the center of attention, which is why he's kept his homosexuality a secret.  He worries that the truth about himself will destroy the band and has, until now, been content spending time with women.  With their upcoming album hitting a rough patch though, Jamie's starting to feel the pressure, which makes his unexpected attraction to their new producer such an inconvenience.  The moment he meets Sammy sparks fly and their time together shows them more than capable of making beautiful music together!  But their journey to HEA isn't an easy one as misunderstandings, self-doubts, and the press cause all sorts of bumps along the way as Jamie decides what's more important...love and truth OR lies and loneliness.  Jamie's a likable hero, sweet and sexy.  He's charming too with moments of insecurity that endeared him to me.  While his fears of coming-out are understandable they're frustrating too as he's selling his bandmates short when doubting their support of him.  Despite my frustration I adored the members of Birds of Prey and was proud of their role in Jamie's journey.
Sammy Rhodes is a self-confident young man being given the chance of a lifetime producing rock gods Birds of Prey's new album.  Add in his instantaneous attraction to the band's lead singer and his life will be inexplicably changed forever.  It's an attraction that doesn't go smoothly though as outside forces and self-doubts weigh on them in a journey full of emotional highs and lows.  Through their time together it's clear that Sammy's comfortable in his own skin, coming-out at a young age has made for an open way of living and loving and he has no desire to hide...even IF that's what Jamie might want.  Throughout his romance with Jamie he has a strong support system of friends who are more like family and they stand beside him through every speed bump on his road to HEA and it made for a few tears and cheers along the way!
On a whole this was a satisfying novella, a well-crafted m/m romance with a large cast of secondary characters who I sometimes lost track of but always found likable.  From Sammy's friends to Jamie's bandmates, these were characters that were unconditionally supportive and that now have me curious to know more about them all.  Jamie and Sammy were a delightful pairing, sweet early on in scenes that warmed my heart before things turned sizzling later on.  There were moments that frustrated me, moments that made me blush, and moments that had me screaming...all in all I got put through the emotional wringer and enjoyed every moment of it!  Though much about this novella was familiar I still found it an entertaining and enjoyable m/m romance that fans of the genre will want to get their hands on!
My rating for this is a B+
*I got this book from the author for review in exchange for my honest opinion. 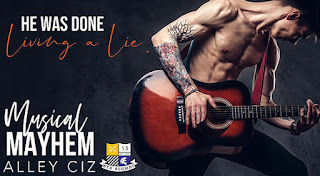 AUTHOR INFO:
Alley Ciz is an indie author of Contemporary/New Adult, Rom-Com, Sports Romances. She's a stay at home mom to 3 amazing and crazy mini royals, a 95lb lab, and let's face it on some days her hubby is her 4th kid...But to be fair she totally loves him a lot.
When she's not corralling her crazy mini royals she can be found writing the stories the voices in her head tell her. Caffeine is a staple in her daily diet since she does most of her writing late at night when the rest of her house is asleep, usually with her trusty dog Buke (short for Beukeboom reluctantly named after a NY Ranger even though she's a NJ Devils fan all the way. Is it any surprise she writes sports romances?
Pizza and mac-n-cheese are major food groups and she is a proud Potterhead and superhero buff.
She is a complete romance junkie and can always be found reading or listening to a book.
FACEBOOK  |  FACEBOOK READER GROUP  |  GOODREADS AUTHOR PAGE  |  NEWSLETTER  |  INSTAGRAM  |  PINTEREST  |  WEBSITE  |  YOUTUBE  |  AMAZON AUTHOR PAGE  |  BOOKBUB
at March 23, 2021