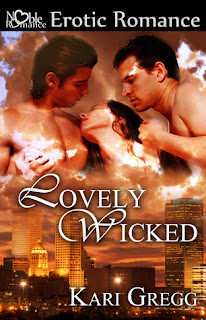 This story started out strong by showing how far Mitch and Olivia have come from the abusive start they had in life.  You can't help but feel happy that they climbed out of that shabby existence to become at least a bit successful.  You soon realize that old scars run deep, particularly for Mitch, and the ties that bind truly never let go.

Olivia just seemed numb throughout the story, with very little backbone.  She was a puppet for Mitch to manipulate and let herself be hurt more by acquiescing to Mitch's every desire.  Sam too allowed himself to be manipulated by Mitch into doing things he knew would return to haunt them and leads to a MAJOR roadblock for their threesome and an uncertain ending to the story.  I actually didn't mind these two characters, particularly Sam who was the most likable of the three and the most honest in his feelings and words.  But having Mitch in their lives was definitely not beneficial to them in my eyes.  They became playthings to Mitch that he used to make his life less lonely.

The sexual interludes in this story were very steamy and VERY frequent to the point where it started to feel repetitive and became a way for Mitch to distract the others from discovering his secrets.  Storyline was sacrificed for sexual interludes and unnecessarily manipulative misunderstandings were used repeatedly to batter at the threesome's connection.  I was often left frustrated by the events in the story and by Mitch's cavalier attitude and it was hard to keep turning the pages.

After such an emotionally draining opening I so wanted this story to continue with the theme of redemption that was at first hinted at.  Because of Mitch and his creation of a threesome everything ground to a halt and any redemption that the characters were working towards suddenly came to a halt.  His overbearing attitude and reluctance to open up emotionally made this story a disappointment to me.  I normally like menage stories but the total lack of equality and honesty amongst the lovers led me to downgrade this story even further.  I don't regret reading this story but am sad it didn't live up to the opening chapter's promise.