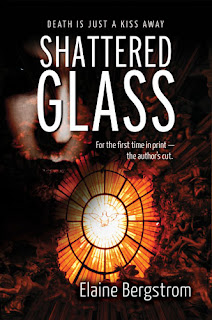 From a book originally released in 1989 and revamped for new readers comes an intriguing story set in 1955 involving the Austra family, a family of vampires who've interacted in the human world for decades.  Stephen Austra is renowned for his glass artistry and enjoys being amongst humans.  His current artistic endeavor brings him to Helen Wells, a polio survivor confined to a wheelchair.  He soon becomes her lover which puts her and her family in jeopardy when murders start occurring that leaves victims drained of blood.  As evidence mounts against Stephen, he's soon rushing to discover the real killer before the secret world of vampires becomes public.  But once he discovers who's doing the killings, bringing him to justice won't be easy and one moment of hesitation might mean the end of Helen's life.

This is a book that has me very conflicted on how to rate it.  I wish I'd read the original to see what was changed to see if my views about the story would be different.  There were some things I enjoyed and thought worked well within the story, but there was more that I felt weighed down the story and made for a less than satisfying read.

I enjoyed the author's vampire mythos where vampires are born and not created and seeing the struggle to keep their race alive.  I enjoyed seeing both good and bad vampires with their intense emotions fully on display.  The descriptions of the vampire kills were bloody and savage and I very much felt a part of it.  The same went for the sexual interludes, they were a bit animalistic and gave interesting insight into the character's heads.  Stephen Austra is a likable character just trying to do what's right while protecting the humans he's come to care for.  He's not led an entirely clean life, but acted as he thought best.  Being able to admit he's not perfect is a good quality in a hero.

Helen too I enjoyed at first, but as she slowly became a part of the vampire world she became less likable.  She started taking on a superior attitude as she left her humanity behind and I can only hope that she keeps on the right path.  The killer too left me conflicted.  I hated seeing his violence and his attitude towards humans, but I could understand his loss of control and desire to bring it to an end.  The huge cast of characters was a negative factor in the story and was a bit distracting.  Keeping track of everyone got a bit difficult as the story progressed.  The excessive historical remembrances and side stories made the story drag and ripped me out of the main story time and time again.

There's much in this book to recommend it, especially to those readers who like a lot of background story.  For me, it just seemed to drag through many sections and I felt that some things could have been removed that wouldn't have been missed.  It's an intense read though that has me intrigued to see what happens next.  For lovers of the vampire genre, you'll especially appreciate the unique world of vampires Ms. Bergstrom has created.


-Come back tomorrow when Elaine Bergstrom will be here doing a guest post and providing a digital copy of this book for giveaway.

*I received a copy of this from the author in exchange for my honest opinion.
at June 08, 2011