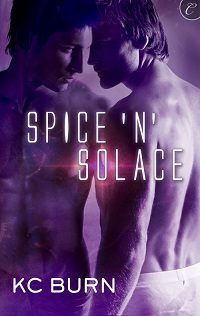 Jathan One-Moon is a renowned negotiator who once every year must renegotiate the rights of humans against an alien race.  To keep relaxed during this stressful time Jathan always hires male escorts from the Spice 'n' Solace agency known for its disease-free escorts.  The agency has recently been under attack by a saboteur that it's owner Kazha Deinos has been desperately trying to unearth.  Unfortunately, on the eve of Jathan's first night in town, Kaz is forced to step in when the saboteur causes a quarantine of the brothels that leaves Kaz the only one available for Jathan.  What starts out as a case of mistaken identity soon becomes a relationship where each one of them gets to truly be themselves, but with outside forces continually beating at them, tough decisions must be made if they want to achieve true happiness.

This is a fast-paced, very sexy read that takes place in a futuristic society where the rights of escorts is a strong theme in the story as is being true to who you really are.  Jathan is a strong character will generations of noble negotiator's reputations to live up to and being gay is definitely not what his family wants since he needs to produce an heir to continue the family line.  A traditional marriage is constantly being pushed at him when he knows that's not what will make him happy.  The pleasures he partakes in during the negotiations are kept very quiet and the only time he speaks out about his fears for the future is when he's with Kaz.  He tells him things he's never told anyone else.

A lifetime of keeping secrets is all that Kaz knows as well.  His father beat him for discovering his true sexuality and his friends make it perfectly clear their disdain towards homosexuality.  Kaz's life is a lonely one so the Spice 'n' Solace brothel is the only family he has.  The brothel might have started as his father's business, but Kaz has made it his own by enacting rules that keep his workers safe and happy.  In fact the sections of the book dealing with the rights of escorts was very intriguing and gave me images of Norma Rae because of all the political talk.  Life for escorts is a tough one, violent at times, and the story doesn't shy away from that.

Living a life of secrets is what brings these two men together and forges a deep connection between them.  The sexual side of their relationship started quickly but the emotional side arose slow and steady and was very believable.  Their sexual encounters were steamy with Jathan definitely taking on the dominant role.  Kaz was very inexperienced due to his father's brutality and definitely is the sub in their relationship.  They truly care for each other and are supportive of what they both want for their futures.  Some life-threatening moments involving the identity of the saboteur lead them to admitting the truth of who and what they are and what will lead to their happiness and the culmination of that is clever and very much a happily ever after ending.

This was a very entertaining and thought-provoking story with strong and very likable characters.  The storyline was highly emotional with a strong political slant that adds an interesting dimension to the story.  I highly recommend this m/m story for its well-written characters and heart-wrenching prejudices.  This is the first book I've read by K.C. Burn but it definitely won't be the last.

*I received this from NetGalley for reviewing purposes.
at June 22, 2011