Review for Inside Out by Lauren Dane 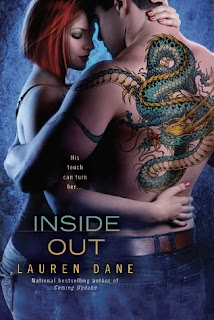 This is the third story in Lauren Dane's Brown Siblings series and is a highly emotional read with likable characters trying to change their lives.  Andrew Copeland has always been seen as a ladies man with not much else to him except for his bachelor ways.  In truth he's been biding his time until he can make his move on Ella Tipton, a woman left physically and mentally scarred by a dangerous ex-husband.  Andrew's held back for fear he'd hurt her, but she doesn't want to be seen as weak anymore and wants to finally live out her fantasies with him.  As their relationship progresses family interference almost ruins the good thing these two have happening where each discovers hidden sides to the other that makes theirs a relationship to last a lifetime.

There's a lot of emotional situations occurring in this story that are carried over from the previous books in this series, although it's not necessary to have read the previous books to enjoy this one.  Cope's brother is in a menage relationship with another man and woman which their father is extremely critical about.  Cope's father is actually critical about everything his son's do.  He sees Cope as a womanizer with no other skills as do the other people in his life.  It's sad seeing him treated this way and I'm happy Ella has come into the picture to boost his confidence and show another side to his personality.  He ends up being so much more than meets the eye.

Ella went through a lot before the start of this story and keeps gaining strength as the story progresses.  I love her character and how she looks for the real side of Cope.  His family always took him at face value, but not her.  That's why I enjoyed their relationship so much, they brought out a hidden side of each other that made each of them stronger and better people.  She refuses to be a victim again and wants what she knows she deserves.  Ella has definitely come out of her shell in this story and a part of that has to do with Cope and how he is with her.  Through his words and deeds he shows Ella that she's a woman of value and she soon starts believing it and acting on it by doing things her ex told her she could never do.  Their romantic interludes are sexy and yet very emotional.  Ella's the first woman Cope's been with where their time together amounts to more than sex.  They were wonderful together and I loved seeing this softer side of Cope, an unguarded side where he can really be himself.

I felt an extra connection to this story by having so many family members from the previous stories involved in this one.  It makes sense though since they're such a tight-knit group.  I enjoyed seeing where previously known characters are now and I'm excited for the future of other characters who have yet to find their happy ending.  This story definitely spotlights Cope and Ella and their amazing relationship and I loved how they each overcame fear to be together.  This is a series with wonderful characters and heart-wrenching action and I look forward to each new release and will hate to see it come to an end.