A Marriage of Inconvenience by Susanna Fraser 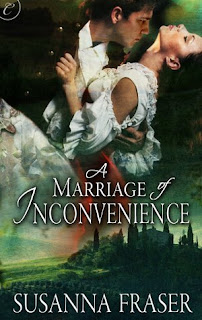 As the poor relation, Lucy Jones and her two younger brothers are at the whim of their rich relatives' generosity.  After being promised financial care by the Arringtons, those relatives renege and Lucy is forced to make her own way for her and her brothers.  Circumstances soon join her to Lord James Selsley, but misunderstandings rear their ugly head and a marriage based on love soon deteriorates.  Will James put aside past hurts to truly make his marriage work or will he throw away the one woman who accepts him totally?

This is an intriguing historical that starts out in a wonderful direction but gets bogged down by petty misunderstandings and truly unlikable characters to end in a predictably unfulfilling end.  At the beginning of the story Lucy is a strong-willed character, dealing with her circumstances with a brave front.  Her family continually reminds her of her lesser status but it doesn't make her bitter.  After years of verbal browbeating for coming into the family from a workhouse with a head full of lice she's still loyal to them no matter how they treat her.

Her first meeting and later interactions with James are entertaining with witty dialogue and a subtle undertone of sexual interest.  James is charming and the kindly way he treats her in comparison to her family makes him even more endearing.  Seeing them grow closer together makes for a very pleasant part of the story and when a stolen kiss forces a marriage between them there's every belief their marriage will be happy considering how wonderfully romantic they are together at the beginning.

However, past truths regarding Sebastian Arrington and his earlier secret engagement to Lucy that he perpetuated to get out of marrying a poor girl he dishonored.  Once his older brother informs him that their family is broke he immediately casts aside Lucy to become married to Anna, James' sister.  Sebastian is a truly despicable character using one woman after another and doesn't get his just rewards until the epilogue and in an unsatisfying way since it's done off page.  I actually dreaded seeing him on the page especially when his mistreatment of Anna causes a rift between Lucy and James.

Between Sebastian's actions and James' anger towards Lucy over keeping the truth about Seb a secret causes the latter half of the story to be extremely disappointing.  Not only does James act completely different than what we've seen all along, there's no reason for his anger towards Lucy.  She's the one decent thing in the whole story and yet he still wants to set her aside for something ridiculously unreasonable.  James became just as unlikable as Seb because of this one act and no amount of forgiveness redeemed him in my eyes.  Anna too became an unrecognizable character because of Seb's unreasonable anger towards her.  She used to be a strong-willed woman at the start of the story and became a shell of her former self groveling for his attention.  With the dramatic change in these two formerly likable characters my enjoyment of the story greatly diminished as well and I was happy to finally reach the last page of the book.

A story that started out strong with moments reminiscent of Julia Quinn came to a resounding thud overburdened with unreasonable actions and unrecognizable characters.  For those who enjoy historicals, this isn't a horrible book but one that started out with great promise and lost itself along the way.  I wish the number of likable characters had outnumbered those that were unlikable and that the few admirable characters hadn't become unrecognizable.  Had those things happened this would have been a more fulfilling read for me, but as it stands I'm left disappointed.

My rating for this is a C-

*I received this book from NetGalley in exchange for my honest opinion.
at August 20, 2011