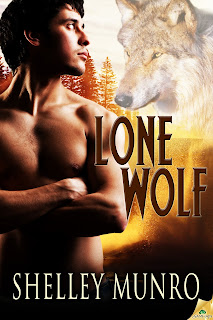 Political intrigue abounds in this sexy read by Shelley Munro that takes place in a world where werewolves have taken their rightful place in society.  Through the use of suppression drugs werewolves permeate every sector of society, including The White House.  The only place they can run wild is at a camp for youth to experience their animal side before going to live amongst humans.  It's here that goth-boy Corey Wilson, the rebellious son of an influential man, meets a man who will forever change his life.  RJ Blake's early life saw him as the sole survivor of a group of werewolves massacred by The Enforcers, men whose sole purpose is to enforce governmental laws.  He's been hesitant to form a commitment before, but once he lays eyes on Corey he can't help himself.  Once they finally connect, an age difference and dangerous men of power will try to stop what they've started.  But for two Alphas, once they've found their mate no one can get in their way.

This is a sexy m/m story that contains intriguing political issues that are just beginning to be addressed in this story and have me hoping for a sequel.  I'm intrigued seeing how werewolves have become an important segment of society and yet have to use suppression drugs to coexist with humans.  Part of the storyline also touches on an Underground Railroad of sorts for those unwilling to take the drugs.  Both of these actions make for an interesting correlation to the treatment of illegal immigrants in today's society and adds an interesting dimension to the story.

The relationship between RJ and Corey is steamy and evolves slowly.  The flirting they engage in is fun and is a nice build-up to them finally coming together.  I enjoyed the changes Corey goes through from the first rebellious glimpse of him in full goth wardrobe to the the confident young man who leaves his judgemental family behind.  His character definitely matured as the story progressed and he found out more about himself.  Even with all of his maturing I still feel a slight disconnect between him and RJ.  RJ is a very serious character dealing with serious issues I don't think he'll ever get over.  He's carefree with Corey and enjoys their fun times, but he still feels like the adult in their relationship while Corey acts like a pouting child occasionally.  I enjoy their relationship but don't feel fully invested because of their emotional inequality.

Another enjoyable aspect of the story are the secondary characters.  The current crop of youngsters at the camp were intriguing and ones I'd like to see more of, especially Teague who is tortured by Corey's father and The Enforcers.  He's very badly hurt and I'm interested to see how he reacts after seeing what the true purpose of The Enforcers is.  The secret pack leader Wilson keeps about Corey and its ramifications are also thought-provoking and will bring about all sorts of new intrigues in any future stories evolving from this one.  Corey's father is despicable but his secrets definitely drive this story.

Lone Wolf is a fast-paced story with a nice mix of action and romance.  With many likable characters as well as cruel villains the reader is kept on the edge of their seat as the story races to its conclusion.  Readers of the paranormal will find much to enjoy in this story while hoping for a continuation of its intriguing points.

*I received this book from the author in exchange for my honest opinion.
at August 25, 2011