Before we get to the good stuff I want to thank Goddess Fish Promotions for letting me be a part of this tour and Ms. Laurens and Avon / Harper Collins Publishers for their very generous giveaway.  So please read the entire post to get to the giveaway information at the end because you don't want to miss out on not one, but two generous prizes.

A young woman looking for a hero finds one in the least likeliest place in Stephanie Laurens' latest release.  As Heather Cynster and her new savior embark on the journey home they come to realize that what they've been searching for all along is right in front of them.  Will they set aside their egos long enough to admit the truth or will they lose out on their perfect mate?  Share the journey in this pleasantly entertaining read.

As the sixteenth book in Stephanie Laurens' Cynster series and the beginning of its own series, the Cynster Sisters, this book has a lot to live up to.  And mostly it succeeds.  Heather Cynster isn't like the other debutantes looking for a suitable husband.  She's considered on-the-shelf after refusing numerous marriage proposals so she sets out to find a hero to marry wherever men are, even those places considered less than ladylike.  An unknown man with revenge on his mind hires men to kidnap her and it's this fateful event that introduces her to her hero, Viscount Breckenridge Timothy Danvers, a man she hasn't liked before now.  But he's all she has as her kidnappers carry her further and further away from home.

Heather is an extremely likable heroine, a strong-willed afraid of nothing female comfortable with who she is.  She'd like to find a worthy husband but won't be heartbroken if it doesn't happen.  She has other plans for her spinster years.  She's no shrinking violet when it comes to sexual matters either and she's more than happy to indulge in what Timothy offers.  Their sexual interludes are intense and numerous in the second half of the book and with the looks given during these moments you can sense a very deep connection between them.

Timothy is equally endearing and though he starts out as Heather's nemesis he quickly takes on heroic qualities.  He's an honorable man who wants to do right.  He's been hurt badly by love before and that makes him unable to express his true feelings in words which is what Heather longs for.  Through his actions the reader has no doubt about his feelings of love and is willing Heather to see the same.  Not until a tragic accident does Heather finally see the truth but with the incident being so over-the-top it takes away from the romanticism of the deed.

The book is very slow starting and the first half is a bit tedious.  It's not until Heather and Tim hit the road that they start cementing their connection since their previous encounters were clandestine.  Their sexual interactions start quickly and are reflected in the intensity.

The reasons for Heather's kidnapping are mysterious as is the real identity of the man behind the kidnapping.  This Laird is being forced by his insane mother who holds the future of his lands in her hands to enact revenge against one of the Cynster sisters.  He's a noble man who watched over Heather after her escape and wants no part of revenge.  He's an intriguing character and I'm excited to see more of him in the next book when Eliza becomes the next object of revenge.

This is a very romantic story with very likable characters that starts out very slowly but picks up in intensity to race towards a heart wrenching ending.  Those unfamiliar with Stephanie Laurens' Cynsters will have no trouble becoming engrossed in the story since the focus is on this one couple.  The mystery surrounding the Laird is an intriguing part of the story and will have readers counting down the days until the next installment of this exciting series.  So mark the date on your calendar to once again jump in to the lives of this immensely entertaining family. 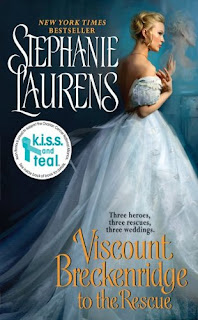 **********GIVEAWAY INFORMATION**********
-The first prize is International and for a $100 Amazon.com gift certificate awarded to one commenter chosen from all entries made during the course of the entire tour.  The second prize is for US/Canada only and gives you the chance to win one of four autographed sets of Stephanie Lauren's backlist from Avon to be chosen from all commenters participating in the tour.  So the more tour stops you comment on the greater the chance of winning.  These are awesome prizes so be sure to comment below!
-Please make sure to leave your email and state if you're International or US/Canada.
-Giveaway ends August 30th at 11:59 pm.
*I was given this book by the author in exchange for my honest opinion.
at August 17, 2011