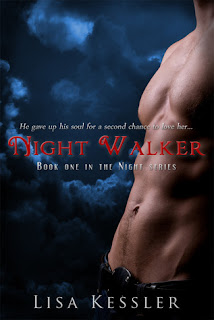 A former man of God and now a Night Walker, Calisto Terana has been waiting lifetimes to be reunited with his lost love.  Originally killed by those considered holy, the spirit of his former lover now resides in the body of choir teacher Kate Bradley.  After a lifetime of blood-soaked dreams and a mysterious shadow man, Kate is drawn to Calisto and wants to get to know him better.  The Fraternidad Del Fuego Santo, the eternal enemy of the bloodsucking Night Walkers, have been watching Calisto determined to keep him from turning others to his way of life.  True love knows no bounds though and amidst the danger presented by a corrupt holy man Calisto will have to make heart wrenching decisions to keep Kate safe.

This is the first installment in Lisa Kessler's Night series and is an exciting start to a highly romantic and action-packed series of books.  What starts out as your usual vampire mythology is soon given a new twist where vampirism is related to being a holy man and a healer.  It's seen as a positive thing where the blood is a healing agent.  Calisto became a Night Walker mostly for the promise of living forever to one day be reunited with his lover but felt an intense desire to protect those who came to him for healing as well.

Calisto carries much sadness and is very brooding because of it.  In that respect he lives up to vampiric stereotypes.  Actually, in many ways he's an average vampire.  He lives on blood, burns in the sun, sleeps all day, and never ages.  The author says vampires are beneath Calisto, but I don't see any distinction to make him superior.  He feels betrayed by religion but doesn't actively want revenge now, he just wants to be left alone to be with his reincarnated lover for as long as her mortal life lasts.  It's outside forces that make him react in anger.

Kate has been tormented by dreams of another woman's death for as long as she can remember.  Only after discovering her fiancee cheating on her does she end up in Calisto's arms.  She's a fairly strong woman who's thrown into a situation beyond her control.  She's likable, smart, and is brave in the face of danger.  Occasionally she appears naive when in Calisto's presence, but considering how long he's lived it's understandable.

The evil in this story is truly vile.  The Fraternidad Del Fuego Santo will do anything to keep the Night Walker in line and show themselves to be anything but pious.  The new man sent to watch over Calisto, Father Jose Mentigo, has hidden his true nature from his Brothers and his true purpose for watching Calisto is to force him in to sharing his eternal power.  He's truly corrupt and will commit any unscrupulous acts to achieve his goal.  He's an intensely scary character and his scenes are heart pounding.

The romance between Calisto and Kate is intense from the very beginning.  Their eternal connection is present from the moment their eyes meet.  The flashback scenes are seamlessly incorporated throughout the story and add to the storyline's emotionality.  When the sexual interludes occur between them they are hot and heavy with strong emotional intensity.  Even after discovering what he is, Kate's love for him is still intense and true.

This was an exciting story with a prologue that leaves you wanting more.  The action scenes are pulse-pounding and keep you on the edge of your seat.  Add in a love that never ends and you end up with a very satisfying read and the perfect beginning to a series that sounds very promising.

*I was given this book by the author in exchange for my honest opinion.
at August 10, 2011