Review for Paradise 21 by Aubrie Dionne 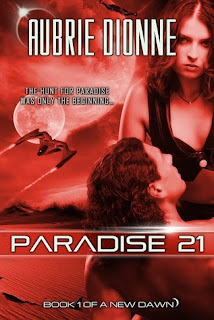 Earth has come to an end and only Lifers, those deemed genetically and mentally desirable, are slated to undertake a centuries long journey to reach a New Eden called Paradise 21.  With her career and future husband chosen for her, Aries is feeling like a prisoner on the ship New Dawn even with seemingly every luxury before her.  She takes a drastic step to gain her freedom and crash lands on a dangerous planet where she's saved by sexy pirate Striker.  Striker was abandoned on this deadly planet by a duplicitous woman and is a bit leery to open his heart again.  But something about Aries draws him and when her fellow Lifers return for her he'll sacrifice everything to get her back.

This is the first installment in a fast-paced and thought-provoking sci-fi series that keeps you on the edge of your seat from start to finish.  The premise is intriguing and encourages political discussions about what makes up a perfect society.  Should societies be populated only by those that are seen as perfect or is variety what a society should strive for.  Through the use of opposing characters Aubrie Dionne has given credence to both sides of the coin and this concept will stay with you long after you turn the final page.

Paradise 21 is full of likable and distinctive characters.  So many conflicted individuals makes for a story full of twist and turns and highly emotional moments.  Add in an exciting and vivid gallery of alien creatures and the story becomes even more memorable.

Aries and Striker make for a loving couple but are in the very early stages of a relationship in this story.  Those wanting a hot and heavy romance will be disappointed, especially when the couple barely kisses.  Along with the good, there's definite bad in this story.  Aries' intended, Barliss, is manipulative and willing to do whatever it takes to get ahead.  He's mentally abusive to Aries and in a final act of career advancement becomes the monster he appeared to be all along.  It's an interesting twist and one that leaves you gasping.

This story was a non-stop thrill ride that has me very excited for the follow-up.  The ideas in this book are thought-provoking and provided pulse pounding action.  Fans of sci-fi will definitely want to get this book and be sure to be on the lookout for the next installment in the New Dawn series.

*This book was given to me by the author in exchange for my honest opinion.
at August 03, 2011