Review for The Lady Most Likely.... by Julia Quinn, Connie Brockway, & Eloisa James 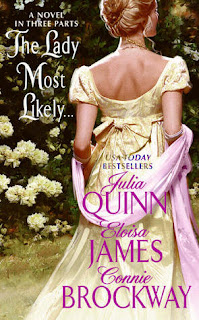 A matchmaking sister and a summer party in the country make for a romantic story where six unlikely individuals form three perfect couples.  Along the path to true love is witty dialogue and sweetly sexy romantic encounters provided by three exceptional authors in this extremely satisfying Regency anthology.

The premise behind this anthology is a clever one where three of the businesses most popular authors have joined together to form one large story that flows seamlessly from start to finish where each of the three sections focuses on a different couple.  The three authors are Julia Quinn, Connie Brockway, and Eloisa James and it's not made clear which author wrote which section but there are some stylistic hints as to their identities.  Their true identities don't really matter though in a story this pleasantly satisfying.

Hugh Dunne has had a near-death experience that has made him realize he needs a wife to procure an heir and who better to assist him than his sister Carolyn.  Amidst the playful games at a summer party at her husband's estate Carolyn's well thought out plans soon go awry when her planned couplings soon find love with the most unlikely people.  The first section involves the painfully shy, but extremely popular, Gwendolyn Passamore who's attracted the attention of Alec, the Earl of Charters.  His initial purpose of being with her is to help his sister gain attention but he soon discovers hidden layers to Gwen that he finds attractive.  Both of these characters are extremely likable and the banter between them feels like foreplay in its intensity.  It's a very pleasant story with no strong sexual interludes and for the wonderful banter alone it's my favorite.

The second story involves long-time friends Kate Peyton and Neil Oakes and their interactions upon his return from the war.  Neil was once a carefree young man who Kate had a crush on until the day he unexpectedly left to become a soldier.  He's come home a much darker man and has to work hard to reignite the love Kate once had for him.  This is yet another satisfying story where the passion smolders all along until the two of them connect in a very sexy interlude in the hay.  Neil is very sexy and full of heart-fluttering innuendos.  Kate's likable too with only a small annoying habit of stomping her foot at numerous times throughout the story.  I'm sure it was meant to be a cute little quirk but it got to be a bit much.  An enjoyable story but probably my least favorite of the three.

The final story involves Hugh Dunne who's lost out on love twice during the party before he finally admits the truth and goes after the one woman he's always had a connection with.....long-time family friend Georgina who's recently been widowed.  Coming from an unsatisfying marriage where her husband constantly critiqued her looks and lovemaking, she's ready to experience sex to the fullest and Hugh is more than ready to satisfy her.  Georgina has been a steadying force from the very first page so it's extremely satisfying seeing her break out of her shell.  From the very beginning of the story Hugh appeared much more knowledgeable and comfortable around horses than women, but in this story he becomes charming and easily whispers sweet nothings in Georgina's ear.  He becomes suave and sexy as he and Georgina create fireworks in a particularly combustible sexual encounter in the grass.  The characters in this are entertaining and the sexual encounters hot in this steamiest of the three sections.

In its entirety this is an enjoyable read with extremely likable characters amidst a unique premise.  There's varying degrees of sexual heat to satisfy every reader and each couple's ending is completely satisfying.  I highly recommend this read not only to lovers of the Regency genre but also to those wanting a happily ever after.  After all, in this story there's three happily ever afters so the reader's happiness is three times greater.