Review for The One He Chose by Wendy Burke 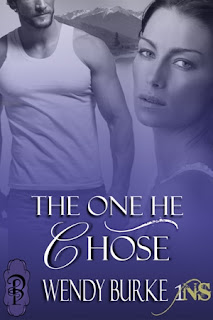 This is a short story that is anything but short when it comes to the emotional impact of the storyline.  Add in likable characters and steamy encounters and you have a great addition to the 1 Night Stand series.

Grace is understandably still mourning her husband at the start of the story but is showing some attraction to her neighbor, and long-time friend of her deceased husband, Jake Van Abel.  She appreciates the man-about-house role that he's undertaken and is starting to appreciate his body too.  She's always felt a connection to him but things have never progressed further.

Jake is someone every woman wishes she had in her life.  He's strong, dependable, loyal, and not afraid to show his emotions when warranted.  He too has felt that connection with Grace but out of friendship for Ben he never acted on it.  He's been quietly supportive of Grace for the last year but desperately wants to make his move now and you can't help but root for this true gentlemen.

Once Grace meets her mystery man the emotions aroused go off the charts.  Both individuals have to come to a level of acceptance and a removal of guilt which happens after a lot of tears.  The sexual encounters are steamy and emotionally intense and there's a feeling of soul-deep connection occurring.

This is an intense tearjerker where the power of love is shown at its strongest.  True selfishness amidst upcoming death is the ultimate display of love and you can't help but mourn Ben too for what he's done for his wife.  Have a box of tissues handy when reading and enjoy this thoroughly satisfying story.