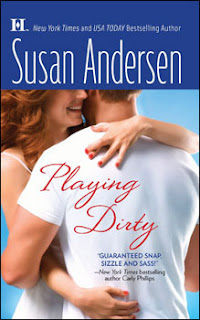 Ava Spencer has always thought of herself as the "fat girl" and no matter how much weight she loses, the feelings of inadequacy remain and flare-up occasionally.  She's having one of those flare-ups now courtesy of "Buttface" Cade Gallari, the boy who crushed her heart in high school by accepting a bet to sleep with the "fat girl".  Cade's back in town now to make a documentary using Ava's mansion and hiring Ava to be the production's concierge and hoping to finally make amends.  As Ava learns more about Cade and how he really feels about her, will she finally be able to put the past behind her and embrace the future he's offering her and a love she's always dreamed about?  Or will insecurities keep her alone?  Find out in this sweet and sexy romance full of likable characters, a bit of mystery, and an immensely satisfying conclusion.

This is the third installment in Susan Andersen's Sisterhood Diaries and it's just as entertaining as the previous books.  The series focuses on three long-time friends who have stuck by each other through every hardship with the guiding force of Miss Agnes Wolcott encouraging their dreams and who left her estate to the girls upon her death, along with a mystery surrounding hidden diamonds.  If this is your first time reading the series, have no fear, this is an easily accessible series that draws you into the story without making you feel lost.  Ava, Poppy, and Jane are the greatest of friends and their interactions make you long to be a part of their circle.  They fiercely defend one another and their scenes together are warm and extremely realistic.  The times they're together are some of the most entertaining and satisfying moments in the book.

Ava is a wonderfully admirable character with body issues that sometimes bring her down.  She never wallows in pity though, she acknowledges the issues and moves on.  This is much how her relationship with Cade progresses.  Once he's finally explained why he committed such a vile act towards her in high school, they undertake a steamy connection that hits a bump or two along the way but is resolved in a quick and mature way.  No annoyingly long misunderstandings between these two.  Once she's committed herself to him they're a wonderful sight to see.

Cade is equally as likable.  He's always felt a connection to Ava.  In a world where there was no joy for him, only disappointment, he could always count on her laughter.  But as a young boy, he'd rather give her a spider than a hug.  That could all be forgiven until that one regretful moment when his anger towards his father led him to an act that he's been trying to make amends for ever since.  His constant attempts at forgiveness are admirable and watching the battle of wills between him and Ava makes for some very entertaining scenes.  Cade's sexy and makes Ava feel that way too.  Their sexual encounters are steamy and perfectly spaced throughout the second half of the book.

There's a few secondary characters related to Cade's documentary, but only one stands out.  Cade's production assistant Beks is a goth-dresser with a tell-it-like-it-is attitude who fits in beautifully with Ava and her friends.  And with her staying in town, I don't think we've heard the last of her yet.  I'd definitely love to see her be the focus of her own story and will be first in line if that happens.  What doesn't make much of an impact is the Wolcott diamond mystery and the bad-guy looking for the jewels.  Tony Phillips is a grifter who scams women and that's clearly what he should stick.  Anything dangerously physical ended with him looking like a buffoon and made this aspect of the story weak and unnecessary.

This was an entertaining story with likable characters both strong-willed and sexy with realistic relationships.  These are mature characters put in realistic situations that act in ways that we can all relate to.  Those wanting a memorable contemporary read need look no further than Susan Andersen's latest release.

*I received this from NetGalley in exchange for my honest opinion.
at August 27, 2011