Book Review for A Face in the Crowd by Christina Kirby 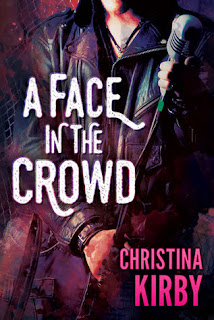 Alexis Hightower considers trust a four-letter word, and she has no intention of getting serious with anyone. After all, her day job as a nurse is plenty serious enough. On one of her nights off, she attends a concert for her favorite band and ends up on stage. She never expected to meet the legendary singer in person or that he would be the one to make her question her way of life. But how do you learn to trust again when the one you want is desired by thousands?
Oliver Honeycutt has it all, success, fame, admirers, but when his family is faced with the unthinkable, none of it matters. Stranded in Atlanta, he meets Alexis, who’s unlike any woman he’s known before. As his attraction grows, plans for the future change, which leaves someone desperate to keep them apart. But Oliver won’t be easily discouraged. To have a future with Alexis, he’ll do whatever it takes to make her see the man behind the image.

As a fan of rockstar romances I was immediately drawn to this story, expecting the usual depiction of vices and eroticism.  What I got instead was an emotionally intense story of life and death set amidst the bright lights and exhilaration of being onstage.  From the first page to the last readers are taken on a journey of highs and lows, melodrama and cheer-inducing moments, that kept me glued to the pages and ready for more once I reached The End.

Alexis Hightower’s a dedicated nurse, competent and caring to her patients.  In scenes that were vividly depicted, showing the hustle and bustle of nursing, readers will get caught up in Lexie’s emotions and dedication to caring for those dealing with serious illnesses.  It’s clear it’s one of the few things she’s devoted to courtesy of an emotionally rocky past.  After a childhood spent with a self-involved mother more concerned with finding a rich husband than caring for her child, Lexie developed a thick skin that permeates her relationships and colors her views on love and HEA.  An ex who cheated on her has also contributed to her doubts about HEA.  Besides work and time spent with her best friend Simone, the only other love in Lexie’s life is the rock band Survival of the Fittest.  When yet another amazing concert finds her being pulled up on stage by the band’s lead singer her life takes an unexpected turn that will have her questioning all her beliefs and finally willing to take a chance.  Lexie’s a likable heroine for the most part, willing to stick up for her patients and herself in a romance that moved pretty slowly.  While she’s confident in her nursing skills she has issues with her self-esteem that have her questioning the attraction Oliver constantly directs at her and which she can’t help but reciprocate.  With her past of feeling lacking though, and with a few secondary characters fueling her negativity, it leads to a frustrating and rocky road to HEA that kept me on the edge of my seat until the very end.

Oliver Honeycutt seems to be living a charmed life with his band touring arenas, beloved by millions, and able to afford whatever he wants.  The night he brings a young woman on stage makes him feel even more on top of the world as he feels an undeniable connection to the mystery woman.  It all comes crashing down into meaninglessness though when his little brother, and bandmate, Bailey gets diagnosed with Leukemia.  From that moment on music takes a backseat to getting Bailey healthy in a vividly depicted journey full of heartbreak and uncertainty.  Discovering that his brother’s nurse is his mystery woman gives him a bit of joy though amidst fear over his brother and he turns on the charm to turn their casual connection into something more.  Issues with their manager, along with jealousies from one of Lexie’s co-workers, leads to unnecessary melodrama and roadblocks to a HEA he’s more than willing to fight for.  Oliver’s a charming hero who’s loving and supportive to his family and friends.  He’s far from the typical rockstar as he hasn’t let fame change him.  He enjoys the life, the traveling, but longs to find a woman of substance who sees him instead of his persona.  Lexie’s the woman who calms him from the very start and fits in perfectly with his family and bandmates but it’s a struggle to get her to see their similarities instead of the differences that have her scared to reach for HEA.  Time and again though Oliver proved himself to be a delicious hero.  He was sweet and caring and shows Lexie how much she means to him in many subtle ways as their sensual relationship slowly morphs into more.

This was an enjoyable read full of immensely appealing characters along with moments of melodrama balanced with the realities of dealing with a life-altering illness.  Lexie’s an admirable heroine held back by her past who has quite a struggle with overcoming her issues with self-esteem and believing in HEA.  It’s a struggle that sometimes frustrated me as she was quick to assume the worst and slow to accept the obvious love of Oliver.  Luckily she had her friend Simone as a supportive sounding board.  Simone was the more vocal of the two, the one to quickly stand up in defense of another and who’s starting a flirtation with another character which I hope to see more of.  When it comes to Oliver, he’s near-perfect as a book boyfriend as he’s charming and willing to wear his heart on his sleeve as he makes numerous grand gestures to show her how much he cares for her.  Their relationship was slow to start with a definite warmth, and numerous sweet interludes, that finally culminated in a richly rewarding encounter very late in the story that had me cheering.  Alongside this engaging main couple was a colorful cast of secondary characters that added heart and soul, as well as melodrama, to the story.  The other members of Survival of the Fittest often brought a smile to my face with their playful interactions and unwavering support.  Each member’s unique personality shown through throughout the story with Leo being the larger than life flirt of the band while Dave was the quiet and reliable one who seems to already have his HEA.  Bailey’s the final bandmember and the one to capture my attention the most.  His struggle with a life-threatening illness was realistically depicted and his reactions to it made me chuckle one moment and brought a tear to my eye the next.  He’s boyishly sweet and it’s clear he longs for what Oliver has with Lexie which has me hoping that more stories are coming for these other lovable and compelling bandmates.  When it came to Lexie’s mother and the band’s manager though, I was often left annoyed.  Their few scenes made me want to pull my hair out as they were predictable in their villainy and obvious in their manipulations and over the top reactions.  Their inclusion dimmed my overall enjoyment and took the story in a soap opera-ish direction that thankfully didn’t last long and that I quickly forgot once the deliciously charming Oliver came back on the scene.  On a whole I found this a satisfying read that I hope doesn’t end here as the other members of Survival of the Fittest deserve their own HEAs after fully tempting readers throughout this story.

*I got this book from Buoni Amici Press for review in exchange for my honest opinion.
at January 11, 2018