Book Tour for Lost For You by Jayne Frost (Review & GIVEAWAY)

Amidst a backdrop of sex, drugs, and rock ‘n roll readers will find themselves consumed by this tale of past pain and trying to save your future from new pain.  Keep reading to get a tempting taste of Lost For You by Jayne Frost, along with my impressions of it, then add this emotionally intense tale to your bookshelf!  In honor of this fourth installment in the Sixth Street Bands series make sure to fill out the form below for the chance to win a $25 Amazon GC too! 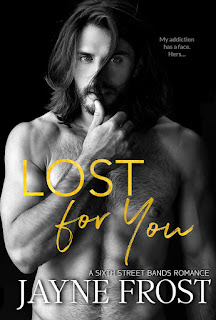 I've been clean for years. But now my addiction has a face. Her face...
At eighteen, I stood at the precipice of stardom. I had the record deal. And the tour to back it up. But I succumbed to the pressure of that life. The dark side.
Now, I skate on the fringe. My brother is the genius guitarist for the band Caged, and I’m the one who helped make that happen. I’m happy to run my bars and my land development company.
Sure I am.
And then I meet her—Taryn Ayers—the music manager behind the three biggest bands in the country. She doesn’t know I’m Cam’s older brother. Or that I’ve got a secret that makes her world and mine fundamentally incompatible.
Problem is, I want to know Taryn. I crave her as much as any drug.
But can I risk letting her know me? 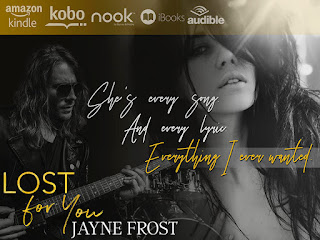 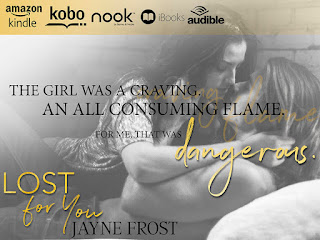 It’s an emotional rollercoaster ride readers undertake in this romance set in the music world, depicting addiction to drugs as well as to feelings that people become too dependent on.  From the first page to the last readers are kept on edge watching the fallout from a years-ago accident that’s still weighing on people and which routinely brought a tear or two to my eyes.

Taryn Ayers has always been involved in music.  With her friends beside her since she was young they set the world on fire, creating bands that went to the top of the charts until the day an accident tore their bond apart.  They’re all still hurting, walking on egg shells in fear of past pain taking over.  Taryn’s clearly just holding on when we meet her, lost and doing what she can to keep everyone happy.  She’s always been the one to keep the peace by ignoring her wants while giving excuses for her cheating boyfriend and overly controlling friend.  Her one moment of rebellion, her one moment of going after what she wants, has her finding a deep connection to the mysterious Chase.  Theirs is a combustible connection where he actually puts her first, values her for who she is and not what she can do for others.  When his past comes roaring back though she’s left angry and betrayed and finally ventures out on her own in a moment of empowerment that shows her where her heart truly lies.  Taryn’s a likable character, reminiscent of myself as she’s a people-pleaser too.  She‘s also clearly dealingwith survivor’s guilt and it’s part of why she acquiesces to her friend Tori so often as Tori’s scars are so clearly on display.  When she’s around Tori, Dylan, and her ex Beckett she fades into the background because of their larger than life personalities.  While Chase’s betrayal broke her heart it did push her to stand up for herself which had me cheering and that had others finally seeing her as their equal.  Her journey is ultimately a powerful one of self-awareness and faith in the power of love and I enjoyed being a part of her self-introspection.

Chase Noble was once a rising young star in the music world, under a constant push by his father, until the day his drug addiction got the best of him.  Ten years later he’s still clean, but it’s clear he misses the music, especially as his brother is trying to get his own taste of fame.  He became a rich businessman instead, flitting from one woman to the next as he sees all of them as gold diggers.  The moment he sees Taryn though he feels an intense connection that has him doing things he’s never done before as she slowly finds a place in his heart.  His jealousy soon gets the best of him, his self-doubts and fears, and takes him back to a dark past that broke my heart.  It’s a defining moment for him and sets the stage for a powerful reunion that brought this book to a very satisfying conclusion.  Chase seems so powerful and in control when we first meet him which is why his slide into the darkness was so heartbreaking.  It was a slow and subtle slide which made it all the more agonizing.  When clean, Chase is a drool-worthy hero, a master at dirty talk and the quintessential book boyfriend for his early words and deeds.  When he loses himself he becomes a different man, an angrier and more bitter man.  It’s a Jekyll and Hyde moment that was emotionally painful and made more palpable with each turn of the page.  By the latter half of the book Chase really stepped-up to be a champion of Taryn despite the heartbreak it caused him and it made me love him all the more because of it.

Though this is part of the Sixth Street Bands series it stands strongly on its own. With a large cast of characters time was still given to each to have me fully invested in what’s to come for all of them.  The romance between Taryn and Chase is crackling, though tumultuous, and ultimately makes them both stronger.  Though readers are put through the wringer alongside them, it’s a heartbreaking journey that’s immensely satisfying.  Other characters find their own healing through the pain on display here in secondary storylines just starting.  The scarred Tori, trying to put her lost love behind her, finds herself finally re-entering the world and running smack dab into the confrontational Logan.  With the loyal Dylan standing beside her though there promises to be complications of the heart.  Taryn’s ex Beckett also had to face some hard truths as his love for her evolved and has him on his own for the first time since he was young.  On a whole this was an unforgettable romance that didn’t sugarcoat the pain of addiction.  It was dealt with head-on in vividly depicted scenes that won’t soon be forgotten.  The rockstar world, with all its good and bad moments, was also on full display as it’s the driving force in these character’s lives and is what binds them all together.  I greatly anticipate what’s to come next after the compelling groundwork laid here and I highly recommend this epic love story to others.

I’m an author who hails from Texas (by way of California), currently living in Sin City.
A romantic by nature, I believe in fairytales and happily ever afters. And music. Because the best stories always have a soundtrack.