Book Review for Always on My Mind by Ali Parker 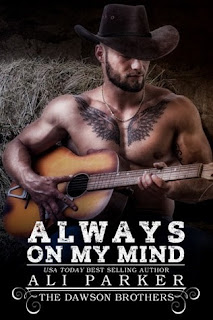 David Dawson is the oldest brother of the rowdy Dawson boys, and the one his father depends on most to help run the family farm.
Unfortunately, he’s far more interested in playing music than baling hay.
He plays at the local bar and gets lucky one night… a beautiful talent agent happens to be passing through the city and she’s desperate to find talent.
Lucky, lucky girl. In more ways than one.

A man with a dream finds himself given the opportunity of a lifetime when a talent agent unexpectedly shows up with an offer that’s hard to refuse.  Obligations to his family’s farm, as well as an intense attraction to each other, leaves both of their futures in doubt though in this erotically-charged romance full of sexy cowboys with stories of their own yet to tell.

David Dawson’s a loyal son and a hard worker whose whole life has revolved around his family’s farm.  When picturing his future he always saw himself working the land and ultimately married to Ella.  Her constant cheating though, including an encounter with his brother Ted, dimmed his future plans a bit but at least he still has his music to count on.  With songs learned from his grandfather, and with songs written by himself that he sings at the local bar, there’s another dream he’s always had but never thought could come true as his family doesn’t support it.  When city girl Sarah shows up her encouragement and belief in him have him contemplating going after his musical dream.  But when family obligations again come to the forefront he’ll be left feeling lost and alone...especially after his mother sabotages his burgeoning romance with Sarah.  It’s a rocky road to HEA as misunderstandings and fears keep readers guessing until the very satisfying end.  David’s a drool-worthy hero who always tries to do what’s right.  He honors his father but is resentful too for the pressure and guilt he always feels from the man who’s never even heard him sing.  His father too has kept his sons isolated by not letting them have cell phones or computers which further keeps David in his place.  I wish David had stood up for himself sooner, fought for his dream instead of making excuses.  Though I’m grateful Sarah pushed him to go after his dream, there were times I felt he was doing it more for her instead of himself.  Despite all that, he’s still deliciously appealing teeming with sensuality and charm, and I was rooting for him every step of the way.

Sarah Myers is feeling low when she finds herself in a small Oklahoma town in the middle of nowhere.  With her heart broken, betrayed by someone she thought she loved, she’s immediately drawn to the sexy cowboy crooner and sets out to make him a star.  With her job on the line she goes above the call of duty, in numerous scenes of her trying to help on the farm, to convince him she’s the one to make his dream come true.  She soon finds her heart warring with her job though as a misunderstanding leaves her heart bruised but her still desperate to sign him to save her job.  Despite the rockiness of their relationship Sarah never loses faith in David’s talent, she’s focused on everyone hearing his voice and I applauded her tenacity.  She’s a likable and strong-willed heroine who surprised me with how well she fit in on the farm despite her citified ways.  Though her quick assumption of his duplicity disappointed me I was glad it didn’t keep them apart for long, with her being the one to make amends, which ultimately renewed my faith in her.  On a whole I found Sarah to be a good match for David as she was the only one to have complete faith in his talent and was the driving force in him finally going after what he’s always wanted.

This was an entertaining story that went on a tad too long and took a few soap opera-ish turns along the way but still kept me riveted to the page.  It’s a fun and flirty romance too full of erotic encounters that had me blushing but feeling charmed as well because of David’s gentlemanly words and deeds.  Sarah and David are a combustible couple who clearly can’t keep their hands off each other in numerous scorching encounters.  They’re committed to making him a star but also committed to his family who Sarah quickly claimed as her own as she eventually won all of them over.  Alongside this likable main couple were the rest of the Dawson clan.  While their father was a bit abrasive and overly set in his ways he ultimately came around and showed his support in a subtle decision he made that changed the brother’s dynamics.  The Dawson brothers are a sexy bunch, notorious for their ways with the ladies, but dedicated to their father and their farm.  Each one made their presence known as the story progressed and I look forward to seeing more of them as each has a bit of baggage weighing on them.  Older brother Ted is a bit mean, bitter over who’s really in charge of the farm, and carrying a bruised heart over what could’ve been with their rival’s daughter.  He constantly pokes at David, makes him doubt his talent, but when it mattered most he was there for him in seeing the truth of his feelings for Sarah.  Middle brother Mason is mysterious, popular with the ladies too, with a love life left hanging at the end of this story.  Youngest brother Luke is sweet, almost like a puppy with his exuberance, and his encounters are also well-known as his brothers seem to enjoy mocking him over them.  They’re a colorful and larger-than-life bunch of brothers who fully tempted me throughout this book and I’m greatly anticipating what comes next for them and recommend this book to all those who love sexy cowboys. 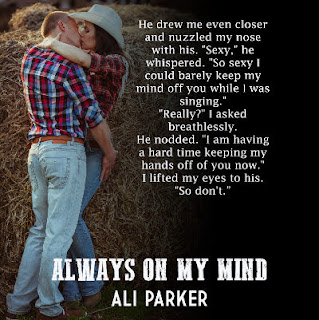 *I got this book from the author for review in exchange for my honest opinion.
at January 24, 2018