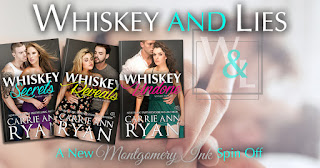 Sparks fly in this tale of opposites attracting in a small town in a brand new series that promises to captivate readers.  Keep reading to get a tempting taste of Whiskey Secrets by Carrie Ann Ryan, along with my impressions of it, then add this first installment in the Whiskey and Lies series to your bookshelf! 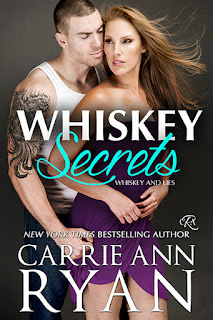 Sparks fly between a former cop-turned-bartender and his new innkeeper in the first installment of a Montgomery Ink spin-off series from NYT Bestselling Author Carrie Ann Ryan.
Dare Collins is a man who knows his whiskey and women—or at least that’s what he tells himself. When his family decides to hire on a new innkeeper for the inn above his bar and restaurant, he’s more than reluctant. Especially when he meets the new hire. But he’ll soon find that he has no choice but to work with this city girl and accept her new ideas and the burning attraction between them.
Kenzie Owens left her old life and an abusive relationship behind her—or so she thought. She figures she’ll be safe in Whiskey, Pennsylvania but after one look at her new boss, Dare Collins, she might still be in danger, or at least her heart. And when her past catches up with her despite her attempts to avoid it, it’s more than her heart on the line. This time, it might mean her life. 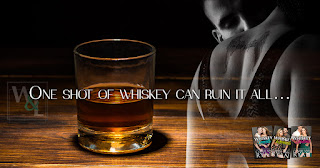 When it comes to the depiction of family, no one paints a more loving and supportive picture than Ms. Ryan.  Throughout her previous book series she introduced us to the memorable Montgomery and Gallagher families which every reader wished to be a member of and who I still think of fondly today.  With this new series starter that’s a spin-off of the Montgomery Ink series, readers are once brought into the close-knit Collins family, who support each other unconditionally and whose interactions warmed my heart.

Dare Collins returned home after his career as a police officer imploded with the death of his partner and the incarceration of another weighing on his heart. After throwing himself fully into that career for years, he quickly realized how much he sacrificed as he returned to the quaint town of Whiskey with little to call his own.  It’s led to feelings of anger and frustration as he’s allowed very little time with his son, and though an owner of the family bar, he still feels as if he’s not allowed full control there either.  All his frustrations come to a head on the day his parents announce a new innkeeper who he’ll have to work closely with which has sparks flying.  Though he’s angry at her intrusion he can’t deny his fiery pull towards her which leads to a quick roll in the hay.  Theirs isn’t a casual relationship though, despite what they both try to convince themselves of, and it’s not long before her past and his future collide in danger to his family and their HEA.  Dare’s a bit dark and brooding early on as his frustrations and fears were clear.  Being around Kenzie though brings out a more carefree side, a more sexy and sensual side that speaks volumes about what’s in his heart.  In their interludes Dare’s commanding side emerges as does his talent for dirty talk which had me blushing.  When with his son though he was caring in scenes that warmed my heart and showed how loving a father he is.  He ultimately became a delicious hero who put his life and heart on the line for the woman he longed to keep safe and claim for himself.

Kenzie Owens is a woman running from her past, a woman trying to heal and find herself after surviving an abusive marriage.  Despite all the mental, emotional, and physical damage done to her she still showed a lot of bravery in starting over in a new town.  She stood up to Dare from the very start and it was a crackling opening salvo to their combustible relationship.  Being around the Collins family gives her a chance to finally feel safe as they’re a protective group who quickly claimed her as one of their own.  She was a bit skittish early on but being around them empowered her so she could defend herself when her ex returns to harm her and her new life.  Kenzie’s a likable heroine who’s still a work in progress as her ex’s machinations and Dare’s indecision has her fearing what’s to come, but has her still standing up for herself and what she wants. From the moment they meet it’s clear they’re meant to heal each other and the journey to that healing kept me glued to the pages.

From the first page to the last I found myself on the edge of my seat while rooting this troubled, yet combustible, couple on.  Their banter and lingering glances showed a couple drawn to each other which added to this book’s sensual storytelling as did their many erotically-charged encounters.  They’re a compelling couple who strongly support each other as their lives take emotional turns and their hard-fought HEA was more rewarding because of it.  Besides Dare, there are two other drool-worthy brothers whose stories have yet to be told.  There’s Fox, who’s a reporter devoted to getting the truth and who’s a big flirt, along with Loch who’s quiet and mysterious yet shows a gentle side when with his daughter.  The glimpses we got of them have me clamoring to know more about them as they’re sexy and supportive...every girl’s dream. Ultimately this was a quick read that nicely balanced erotic interludes, with quiet moments of heart and soul, as well as a bit of suspense with Kenzie’s ex which took a melodramatic turn before abruptly concluding.  It’s a satisfying story that I recommend as it lays enticing groundwork for future installments in this book series.