A previous one-night stand brings two men back together during a break from touring in this emotionally engaging m/m romance.  Keep reading to get a tempting taste of Scratch Track by Eli Lang, along with my impressions of it, then learn more about this book by visiting the other sites hosting this tour.  In honor of this third installment in the Escaping Indigo series make sure to leave a comment below about why readers love rockstar romances for the chance to win e-copies of the first two books in this series too! 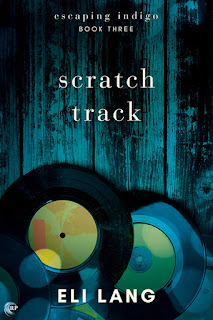 Being a roadie isn’t everyone’s idea of a dream job, but it’s all Quinn wants. He loves touring, loves getting to hear amazing music every night and, more than anything, loves being someone the band members of Escaping Indigo can lean on.
When Quinn joins the band in the recording studio, it’s supposed to be fun, but it only seems to remind him of doubts he thought he’d left behind—doubts about his brother’s death, his place with the band, and his ability to care for and support his friends. So when his ex, Nicky, tumbles back into his life, Quinn’s completely unprepared.
The failure of his past romance with Nicky is yet another strike against Quinn’s confidence. But Nicky’s unassuming kindness makes it hard for Quinn to resist a new entanglement. Quinn isn’t sure they won’t make the same mistakes again, but he wants a second chance, even if that means facing the past, learning to let his friends support him, and proving to Nicky that, this time, he’ll be someone Nicky can rely on.

As a fan of rockstar romances I found myself eagerly grabbing at this book the moment it hits shelves and upon completing it I must say that there’s a lot to like about this m/m romance.  There’s also a bit of frustration too in this tale of second chances and grief as it went on a bit too long and got lost in its lyrical narrative a time or two.

From the first page to the last this book sets itself apart from other rockstar romances as it’s not your typical tale of sex, drugs, and rock ‘n roll.  Yes, it’s a steamy tale but there’s no groupies or heavy partying going on to affect the band’s connection.  There’s actually a familial vibe amongst the members of Escaping Indigo and Rest In Peach as they spend time making beautiful music together while in the studio.  It’s a time consuming process that gives ample time to the reunion of roadie Quinn and Rest In Peach’s drummer Nicky.  Their one night together could’ve amounted to more but a tragic event befell Quinn, an event that he’s still punishing himself for and that’s keeping him from living life to the fullest.  In this third installment in the series these two men work through the pain of the past in a journey of self-forgiveness and trust.

Quinn’s always been the caretaker, from the band to his family, the one everyone could count on to see to their needs and keep them safe.  It’s a role he took seriously until the day his brother overdosed.  That moment left him reeling, feeling lost and ashamed for all that he didn’t do and it’s something he still can’t forgive himself for.  His grief has caused him to wallow in self-punishment as he doesn’t feel worthy of love and happiness after failing his brother.  His feelings are the crux of the division between him and Nicky and keeps them struggling every step of the way.  A lot of time is spent in Quinn’s head but there were still times I felt that there was still much I didn’t know about him.  He’s always been quiet and contemplative and he’s still that here, spending a lot of time rehashing his grief.  It ultimately made for emotional storytelling but much frustration too.

Nicky’s the more carefree of the two, the one to initiate their reunion.  He got Quinn talking and made him start dealing with the past head-on through many heartfelt talks and by opening up a bit more about himself.  One secret he shared was a definite surprise and changed their dynamic a bit.  It deepened their connection, made it more of a commitment between the two of them.  In some ways I felt like I knew Nicky more than Quinn and yet I still felt like there was more missing.  He was hurt by Quinn leaving without a word and it’s clear he’s still holding back a bit.  For every step forward they took I felt there were many more steps missing in their journey of forgiveness but I applaud Nicky for each olive branch he extended to Quinn.

This was a steamy story as Quinn and Nicky were a crackling couple teeming with sexual tension.  From longing glances to deep talks these two spend a lot of time together, spend a lot of time dealing with their pasts while hoping for a future, and it made for some intense reading.  Their issues were weighty and Quinn’s grief was an especially heavy burden that didn’t allow for many lighthearted moments.  It did all lead to a satisfying ending though, an ending that felt more like a HFN than a HEA, but no less rewarding for all that came before. 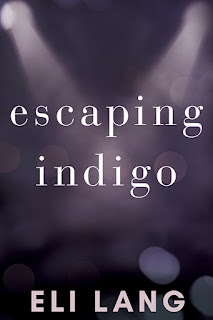 Escaping Indigo is a busy band, whether they’re playing edgy rock music in a darkened theater, touring the country together, or meeting up with other musicians at a summer festival. And they’re always writing new melodies, new riffs, and new lyrics to tell their stories.
Micah, a drummer, is hoping to leave the memories of his old band behind by going on tour with Escaping Indigo as a stagehand. But there he meets Bellamy, the lead singer, and he finds himself tangled in a romance that makes him face everything he’s lost. 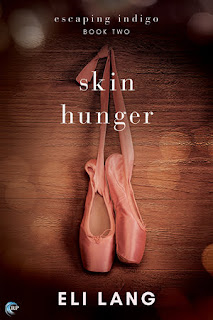 Ava, drummer for Escaping Indigo, is hoping that time away from the band will give her a chance to sort through her complicated feelings for her best friend, who’s in love with someone else. But a chance meeting with a beautiful woman leads to an unexpected romance that makes Ava rethink her plans for her future.
From unrequited love to finding your way, old friendships to lost dreams, surprising secrets to unexpected encounters, Escaping Indigo has a song to suit.

LEARN MORE ABOUT THESE BOOKS here.

Eli Lang is a writer and drummer. She has played in rock bands, worked on horse farms, and has had jobs in libraries, where she spent most of her time reading every book she could get her hands on. She can fold a nearly perfect paper crane and knows how to tune a snare drum. She still buys stuffed animals because she feels bad if they’re left alone in the store, believes cinnamon buns should always be eaten warm, can tell you more than you ever wanted to know about the tardigrade, and has a book collection that’s reaching frightening proportions. She lives in Arizona with far too many pets.

PRIZE IS AN E-COPY OF THE FIRST TWO BOOKS IN THE ESCAPING INDIGO SERIES!

-GIVEAWAY IS OPEN TO EVERYONE.
-To be entered, LEAVE A COMMENT TELLING US WHAT YOU LOVE ABOUT ROCKSTAR ROMANCES (ALONG WITH YOUR EMAIL ADDY).  NO EMAIL ADDY=NO ENTRY.
-To increase your chances of winning, comment at each of the stops on this tour.
-Winner will be chosen randomly from each valid comment left.
-GIVEAWAY ENDS AT MIDNIGHT EST ON FEBRUARY 3RD.
at January 31, 2018