Book Review for Fill Me by Michelle Hazen 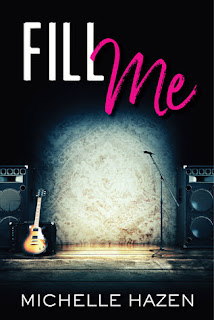 3 friends. 1 band. Fate starts here.
A garage band drummer who can’t keep her boyfriend satisfied.
A bassist who’s performing on darker stages than the musical kind, and can’t tell his BFF.
A lead singer who can’t seem to hold the headliner spot in his own friendships.
It’s just one more dive bar gig, but tonight, all the band’s secrets are coming out.

Fans of rockstar romances will enjoy this slice of life glimpse into an indie band on the cusp of fame.  It’s a quick read but one that gives an entertaining introduction to the members of The Red Letters that will charm as well as entice.  Once the final page is turned readers will be left clamoring for more and waiting in breathless anticipation for each of them to take center stage.

Having just finished the first book in the Sex, Love, and Rock & Roll series I found myself utterly charmed by the romance between female drummer Jera and the wise beyond his years Jacob.  It was a delightful read that depicted a young woman confident in her music, but who was dealing with issues of self-esteem, who luckily found a quintessential book boyfriend who I’m still drooling over today.  During their emotional journey to HEA readers also got to see enticing interactions between Jera and her bandmates, Danny and Jax.  For me, those scenes weren’t near enough though as they’re a compelling duo with personalities that hide very complex natures.  Reading this prequel gives even greater insight into Jax, and especially Danny, as well as laying the groundwork for how Jera met Jacob in a tale that was a decadent little morsel.

Danny’s been Jera’s friend for years and they have a deep connection that will never be more than friends as they know each other far too well.  This prequel shows their funny interactions as well as their unwavering support for each other that has a familial feel to it.  In Jera’s book Danny always seemed to be the quiet one, the one who cares for others and who knows exactly what they need.  Those traits take an erotic turn here though as readers discover his naughty side as a Dom in a club scene that left me parched yet feeling sympathetic towards him and his feelings of loneliness, his longing to find someone for his own.  Jax also isn’t who he seems.  Onstage he’s coolly confident and self-assured.  Off the stage though he’s full of insecurities.  From a mother who only cared when she could show him off to the deep friendship between Danny and Jera that makes him feel left out, I found myself aching for Jax and longing for him to find someone to love him just for himself.  These two men are both sexy, yet clearly struggling behind that pretty boy facade, with rockstar vibes just starting to shine through.  Their dichotomies called to me and the glimpses we got of them here are merely an appetizer that has me counting down the days until the next installment in a series that I wholeheartedly recommend. 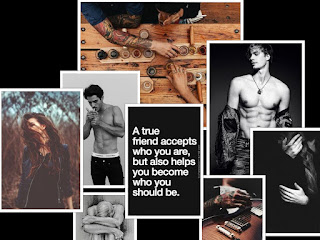