As a fan of MC romances I find reason to celebrate today with this steamy read with a bit of suspense added in.  Keep reading to get a tempting taste of Claiming Tiny by Khloe Wren, then add this scorching fourth installment in the Charon MC series to your bookshelf! 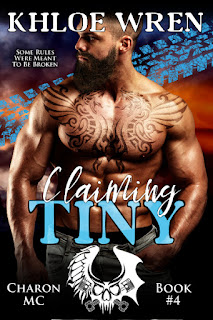 Some rules were meant to be broken.
Badass biker Ryan ‘Tiny’ Nelson has no plans to settle down. But when the feisty Mercedes ‘Missy’ Soto shows up at the Charon MC clubhouse, it only takes one taste before they’re both hooked. When Missy’s past catches up with her, can Tiny find the woman he’s fallen for in time to give her a Christmas to remember, or is she lost to him forever?

Except for one thing, I loved life here at the Charon MC clubhouse. That one thing was Tiny. Damn, but he was a beautiful man. Messy dark hair, scruffy beard and soulful hazel eyes I could stare into all damn day. And despite his road-name, he wasn’t small in the least. Nope, he was huge, like a bear. He wasn’t only tall at six feet five, but broad in the shoulders, too. When he came for me, I adored how he’d hold me against him. It felt like he’d keep me safe from everything when he wrapped me up in his big arms. His size easily dwarfed me, but I never felt intimidated. Nope, I felt safe. Protected.
A sigh escaped me as I made my way back to the bar for more drinks to take back out there. He didn’t search me out much anymore. Fawn, another of the club whores who I lived with, told me it was because he wanted me for more than some quick relief. But if that were the case, wouldn’t he be all over me whenever he could? Fawn said that was why I didn’t get chosen by the others very often, because they didn’t want to piss Tiny off. Well, they pissed me off. 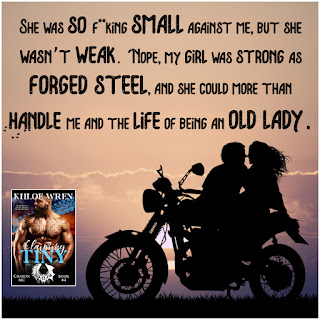 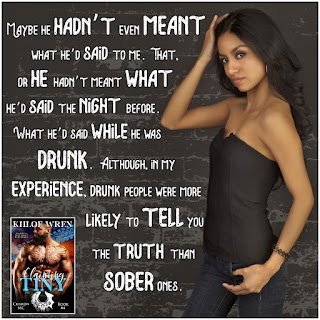 Khloe Wren grew up in the Adelaide Hills before her parents moved the family to country South Australia when she was a teen. A few years later, Khloe moved to Melbourne which was where she got her first taste of big city living.
After a few years living in the big city, she missed the fresh air and space of country living so returned to rural South Australia. Khloe currently lives in the Murraylands with her incredibly patient husband, two strong willed young daughters, an energetic dog and two curious cats.
Khloe started writing in 2012 after complications from major surgery left her unable to do much other than read, and write for several months. She now has over twenty published romantic suspense books under her belt.
While Khloe doesn’t ride a bike herself, yet, she loves riding pillion behind her husband on the rare occasion they get to go out without their daughters.