Book Review for After Sunrise by Leigh Robbins 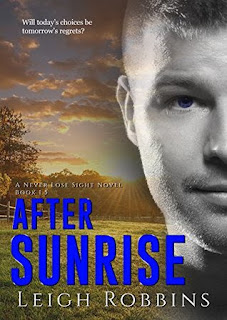 After receiving a call from his commander, Sergeant Brett Parker rushes overseas to the military hospital, where two of his Marine brothers are recovering after an IED explosion decimated the rest of their unit. Struggling with survivor guilt, Brett’s thoughts are dark and tortured until he encounters the beautiful brunette in the cafeteria.
Lauren Cage always dreaded getting “the call” every military family fears. Flying to Landstuhl, Germany to her wounded brother’s bedside, she battles the grief threatening to overtake her. Being in a foreign country is intimidating for a young woman traveling alone, but when she meets one of her brother’s best friends and comrades, her anxiety subsides.
After five emotional days, Brett is forced to return to war and Lauren goes home to New York. For over a year, they secretly burn up the internet with a scorching love affair neither time or distance could deny. When entanglements from the past threaten to pry them apart, Brett is faced with a personal dilemma and is forced to embrace his heart’s desire.
FROM THE AUTHOR...This book is for readers over 18+, while it can be read alone, I recommend reading Darkness Before Dawn, Book #1 in the series for fuller enjoyment. After Sunrise- Book #1.5 is a 45K word Novella and a must-read before Book 2 which is coming soon!

A connection formed at a time of great heartbreak is just the start to the rollercoaster ride of emotions that Brett and Lauren go through in their romance that starts here and is revisited in Ms. Robbins‘ previously released, Darkness Before Dawn.  Glimpses of the emotional and physical ravages of war, along with fears of those back home, fuel this story and ultimately leaves readers hanging in suspense.

Lauren’s always been close to her brother after all the abuse they dealt with as kids, so when she hears that he’s been severely injured on a military op she flies to his bedside.  Mired in fear, and never leaving his side, Lauren’s feeling alone and desperate to find something positive to count on.  Meeting Brett is exactly was she needed at that moment and with time running out before he returns to the war she’ll make every moment count.  Over five days of sharing their fears and through numerous erotically-charged interludes their connection grows and has them looking towards the future.  Emails and internet chats strengthen their bond but reality soon crashes down when she discovers Brett’s been hiding something.  From that moment on she’ll have to decide if he’s worth fighting for or if she should move on without him.  Lauren’s a likable heroine and is strongly supportive of those she considers family.  She has a loving personality and a belief in HEA.  Though she’s terrified of what might befall Brett she still sees only him in her future and proves it through each scorching word she writes to him.  She was all-in from the moment she met him which is why she’s so hurt when she discovers what he’s been keeping from her.  Despite that though, I thought it was a bit immature of her to not hear him out during one of his many attempts to right his wrong.  It’s clear she’ll never be over him and her attempts to do so show her to be a bad liar.

Brett Parker thinks of his fellow teammates like family which is why he’s devastated to learn that they were attacked while he was on leave.  His team was left virtually destroyed with only two soldiers left alive but with horrendous injuries.  It’s left Brett questioning “what if” and wanting to embrace life to the fullest which makes his initial meeting with Lauren momentous.  Amidst heartbreak over what’s befallen his teammates he finds himself clinging to her, giving her support while getting his own bit of forgiveness.  Numerous scorching encounters and long talks lead to an unforgettable few days that leaves him conflicted once they’re apart.  He longs to be honorable, but he also longs to be happy, which are at war with each other as he’s keeping a secret that will cause Lauren pain.  His reasons for not telling her about what awaits him back home was not done maliciously though, but it certainly led to the same kind of fallout.  On a whole I liked Brett and didn’t hold his decision against him as he immediately knew he did wrong and was quick to try to make things right.  When he was with Lauren he was carefree, but when he went home he felt trapped and once he lost Lauren he was lost himself.  I ached for him and am fearful of what will befall him now that his hope’s been taken away.

This was a sexy story full of heart and soul.  It vividly depicted the high cost of war, both physical and mental, and kept me glued to the pages.  The romance between Brett and Lauren was crackling from the very beginning with a sense of foreboding of what might happen once he heads back out into the field.  There was a sense of desperation too that made their sensual encounters a bit frantic.  Lauren’s anger was understandable at first but I felt that by not listening to Brett’s explanation she was purposely punishing him and it frustrated me as her own life decision felt like she was just settling.  This is a compelling story on its own, but it’s so much richer reading it in conjunction with the first installment in the Never Lose Sight series, as you get a more fleshed-out understanding of their epic romance.  Being left with a cliffhanger here made me want to scream, but I’m greatly anticipating what comes next for these two as they struggle through love and war.

*I got this book from Hidden Gems for review in exchange for my honest opinion.
at January 17, 2018