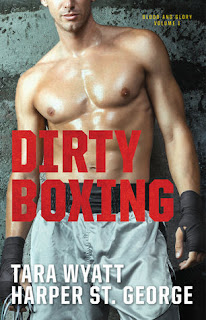 After an unstable childhood, Jules Darcy is very familiar with the risks of falling in love. And as an adult, she’s never let herself forget just how high those stakes can be. That’s why she ran away a year ago after her fling with MMA fighter Nick Giannakis quickly got serious. But when she jumps at the opportunity to reconnect with her dad by accepting a job with his growing fight league, she’s stunned to learn the abs, the chiseled arms, and the rock-solid punches she has to market belong to none other than her former fling. Unable to run away from the sexy middleweight this time, Jules vows to keep things strictly professional. But one look at Nick, and her resolve starts to crumble...
The last thing Nick expects when he signs with the prestigious World Fighting Championship is that he’ll have to work with the only woman who ever broke his heart. Desperate to hide the pain she caused him, Nick vows to keep his distance from his gorgeous ex. But when he realizes their intense chemistry hasn’t faded after a year apart, he wonders if they could have a future together, even if dating the boss’s daughter could complicate his bid for the championship belt.
Under the bright lights of Las Vegas, in the world of high-stakes prize fighting, they’ll have to take a risk and decide if their love is worth fighting for.

Fans of sports-themed romances will find themselves cheering for this steamy tale of emotional baggage and second chances set in the gritty world of MMA fighting.  With its entertaining balance of sexiness in the bedroom and exhilarating fight scenes in the ring, readers will find their hearts racing and pulses pounding.  From the first page to the last it’s a sensual journey full of emotional highs and lows that has me greatly anticipating the next installment in the Blood and Glory series.

Jules Darcy grew up in a family full of emotional chaos.  With an addict for a mother and a father more dedicated to being an MMA star than a parent, Jules was left on her own with very few warm memories to recall as an adult.  Her parent’s dysfunctional marriage has left her leery of love and questioning her ability to be emotionally supportive of another and to find her HEA.  The day she met Nick Giannakis was the day she finally got a glimpse of HEA but fear had her running.  While a new job working for her father’s MMA league gives her the chance to reconcile with her father, it also surprisingly reunites her with Nick and brings their scorching connection back to life.  She soon finds her feelings for Nick warring with her work in a struggle to earn her father’s love that at times frustrated me but was a reflection of her childhood dysfunction.  By the end of the story though all the frustrations were worth it as she proved herself worthy of the delicious Nick in a grand gesture that had me cheering.  Jules is self-assured when it comes to her job but when it comes to emotions she’s that little girl again, letting her fears and doubts guide her.  When it was just her and Nick there was a joy to their time together, a sense of wildness and being carefree.  Outside the bedroom though she felt the pressure of her father’s judgements which weighed on her time with Nick and had her making decisions that diminished their deep connection.  It was a frustrating battle to see which side would win, but it was a richly rewarding battle nonetheless.

Nick’s the opposite to Jules in many ways.  He comes from a tight-knit Greek family who openly show their affection and support.  Though he feels guilty over leaving them behind he’s determined to become champion and will do whatever necessary to get there.  The first time he met Jules he knew she was different from the other groupies.  She saw the real him, the man behind the chiseled body and model-like looks and it was just the start to weeks of joyous and scorching interactions that had him ready to keep her forever.  Her harsh exit though left him reeling and angry which makes for an awkward reunion.  Though he wants to hate her for what she did it’s clear he’s never stopped loving her which makes the renewing of their relationship inevitable.  It’s a rocky renewal as past feelings rear their ugly head, along with Jules’s fears over her past and their future, and led to a lot of push and pull in an emotional tug-of-war that all came to a head on the eve of the Championship Tournament whose outcome would change his life irrevocably.  Nick’s a delicious hero, the quintessential hero in many ways.  He’s fun-loving, sexy, and not afraid to show his feelings or put his heart on the line.  His interactions with his family are heartwarming and showed how caring and protective he is towards those he loves.  The way he is with his family is like a promise and a temptation to Jules of what she could have if she just takes a chance and I was rooting for her to take that leap of faith.

This was an emotional tale, a scorching one full of clandestine encounters, that was perfectly balanced with the grittiness of being in the world of MMA.  Jules and Nick are a combustible couple whose attraction is obvious despite her father’s dislike of him and her fears over her cold upbringing.  These issues were sometimes handled well but at other times I was left frustrated.  When it came to the sexual interludes readers will find themselves blushing with scenes that were erotically-charged yet playful.  In scenes like these Jules and Nick were completely in sync with not a care in the world which gave me hope that they’d finally get their HEA.  When it came to action outside of the bedroom the authors vividly depicted exhilarating fight scenes with the mundane aspects of living the life of a fighter.  This part of the story gave readers a bit more insight into the fighters, a glimpse of their fears and aspirations which drew me to them even more.  The fight scenes themselves were gritty as I was kept on the edge of my seat while feeling each punch leap from the page.  Alongside this engaging couple were the other men and women of the MMA world, a self-assured and compelling group who have me excited for more books in this series.  Amongst all those characters, I’m most looking forward to seeing more of fellow fighter Gabe Maddox whose tragic past and stoic nature call to me as well as Jules’s friend Meg who fought cancer and is now ready to grab on to life with both hands.  Theirs promises to be an epic romance and I’m counting down the days until we get back into the ring and watch fighters fight for the most important thing of all...HEA.

*I got this book from the author for review in exchange for my honest opinion.
at January 01, 2018