Book Spotlight on The Color of Love by Sharon Sala (GIVEAWAY)

Readers looking for a charming and heartwarming romance will get all that and more when a secret admirer comes out of hiding when danger arrives on the doorstep of the woman he cares for in this small town romance.  Keep reading to get a tempting taste of The Color of Love by Sharon Sala, then count down the days until this book releases on February 6th!  In honor of this fifth installment in the Blessings, Georgia series make sure to fill out the form below for the chance to win a set of the books in this series too. 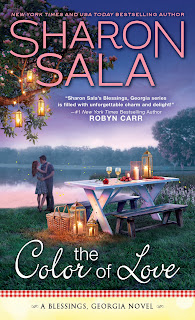 He might be winning her heart before she even knows who he is...
Welcome to Blessings, Georgia, the small town with a big heart! Anyone from a small town can tell you that gossip never stays quiet for long. The biggest news lately is Ruby Dye: she's been receiving gifts from a secret admirer. But Ruby isn't sure she can trust this newfound happiness. Nobody knows the dark secrets she keeps about her life before she arrived in Blessings. Is this the beginning of a would-be romance, or is she the target of something more sinister?
Everyone admires Ruby and her determination to do the right thing, especially local lawyer "Peanut" Butterman. He's finally ready to tell her how he feels. But when trouble arrives on Ruby's doorstep and their little town is threatened, Peanut may have to prove himself in ways he never imagined.

It was a job she hated that drove Sharon Sala to put the first page of paper in an old typewriter, but it was the love of the craft that kept her writing. Her first efforts at writing came in 1980 when she began a book that wound up under her bed. A second book followed in 1981 and suffered a similar fate, but she claims the writing bug had bitten hard. However, she let life and the demands of a growing family delay her from continuing until a tragedy struck.
Her father died in May of 1985 after a lingering illness and then only two months later her only sister died unexpectedly, leaving her almost blind with grief. She vowed then and there that she was not going to wind up on her deathbed one day with regrets for not following through on her dreams.
She joined writers groups and attended conferences and slowly learned her way around the written page. By 1989, she decided she had come far enough in her writing to attempt another try at book-length fiction and began a book that would later be entitled SARA’S ANGEL. As fate would have it, the first publisher she sent it to, bought it, and she hasn’t looked back.
As a farmer’s daughter and then for many years a farmer’s wife, Sharon escaped the drudgeries of life through the pages of books, and now as a writer, she finds herself often living out her dreams. Through traveling and speaking and the countless thousands of fan letters she has received, Sharon has touched many lives. One faithful reader has crowned her the “Reba of Romance” while others claim she’s a magician with words.
Her stories are often dark, dealing with the realities of this world, and yet she’s able to weave hope and love within the words for the readers who clamor for her latest works.
Always an optimist in the face of bad times, many of the stories she writes come to her in dreams, but there’s nothing fanciful about her work. She puts her faith in God, still trusts in love and the belief that, no matter what, everything comes full circle.
Her books, written under her name and under her pen name, Dinah McCall, repeatedly make the big lists, including The New York Times, USA Today, Publisher’s Weekly and Waldenbooks Mass market fiction.
Sharon Sala.
A woman with a vision.

a Rafflecopter giveaway
at February 03, 2018