Ms. Bosco has crafted an intensely emotional tale set in the MC-fueled world of the Satan’s Knights as a wounded man tries to pick up the pieces by revisiting the past.  Keep reading to get a tempting taste of Loner by Janine Infante Bosco, then start counting down the days until this book releases on February 23rd!  In honor of this fourth installment in the Nomad series make sure to fill out the form below for the chance to win an Alex and Ani bracelet and an Amazon GC too! 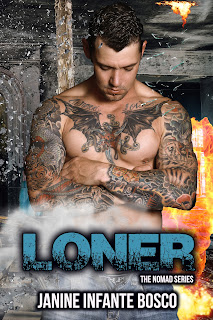 Linc
A man who can’t visualize his future will always revert to his past.
To where he came from and all the ways he failed.
The murder and mayhem that changed his life and darkened his soul.
The legacy of who he is will burn through his veins and ominously guide him to hell.
A place where he pays not only for his sins but the sins of his father as well.
A hustler by nature, a loner by choice, I am the spawn of Satan.
I am Lincoln Brandt and I am the son of Cain.
Kelly
Reckless and rebellious, I’ve spent most of my life running away from one mistake only to chase another.
At the end of my rope with nowhere left to turn, I’m about to make the biggest one of all.
Face to face with the bastard who broke me, I lay it all on the line for him.
My heart and my life.
Heaven is overrated and the ride to Hell doesn’t have to be lonely.
The stakes are high.
The risk great.
It’s do or die.
Together we’ll ride.
Forever we’ll burn.

When you wake up from a coma and are told there is a fifty-fifty shot of you walking again, it’s hard to think about anything else. Nothing mattered after that. Not the reasons I joined the Satan’s Knights MC or why I took up permanent residency in Brooklyn. I didn’t give a fuck about the men who I proudly called my brothers or the legacy of Cain. All that consumed me was misery and suicidal thoughts. 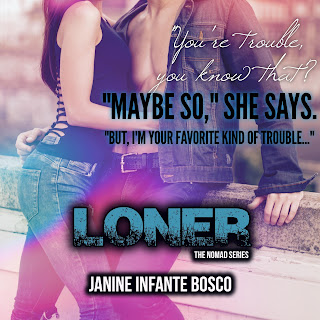 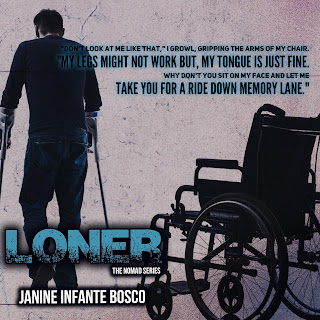 Janine Infante Bosco lives in New York City, she has always loved reading and writing. When she was thirteen, she began to write her own stories and her passion for writing took off as the years went on. At eighteen, she even wrote a full screenplay with dreams of one day becoming a member of the Screen Actors Guild.
Janine writes emotionally charged novels with an emphasis on family bonds, strong-willed female characters, and alpha male men who will do anything for the women they love. She loves to interact with fans and fellow avid romance readers like herself.
She is proud of her success as an author and the friendships she’s made in the book community but her greatest accomplishment to date would be her two sons Joseph and Paul.

a Rafflecopter giveaway
at February 05, 2018