With her latest release, Ms. Kleypas has crafted an unforgettable heroine who’s ahead of her time who gets involved with a mysterious man whose life is teeming with secrets and lies.  Keep reading to get a tempting taste of the historical romance Hello Stranger by Lisa Kleypas, then add this compelling fourth installment in the Ravenels series to your bookshelf! 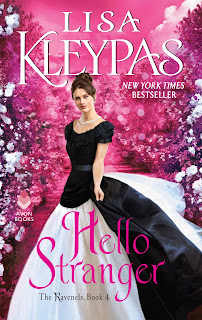 New York Times bestselling author Lisa Kleypas delivers a scintillating tale of an unconventional beauty who finds passion with the spy who can’t resist her.
A woman who defies her time
Dr. Garrett Gibson, the only female physician in England, is as daring and independent as any man—why not take her pleasures like one? Yet she has never been tempted to embark on an affair, until now. Ethan Ransom, a former detective for Scotland Yard, is as gallant as he is secretive, a rumored assassin whose true loyalties are a mystery. For one exhilarating night, they give in to their potent attraction before becoming strangers again.
A man who breaks every rule
As a Ravenel by-blow spurned by his father, Ethan has little interest in polite society, yet he is captivated by the bold and beautiful Garrett. Despite their vow to resist each other after that sublime night, she is soon drawn into his most dangerous assignment yet. When the mission goes wrong, it will take all of Garrett’s skill and courage to save him. As they face the menace of a treacherous government plot, Ethan is willing to take any risk for the love of the most extraordinary woman he’s ever known.

He heard her muffled chuckle. She continued to lean against him while the trio of constables expressed sympathy for the unfortunate patient. Eventually the men departed with a chorus of hearty farewells. Ethan discovered that his other arm had stolen around Garrett. Making himself let go of her was like trying to uncoil a steel spring.
“You should go up to your father now,” he said withdifficulty.
“Eliza will look after him while I take a few minutes to show you some slides. I have insect wings . . . pollen grains . . . flower petals . . . What would you like to see?”
“The inside of a hansom cab,” he said softly. “I can’t be alone with you, darlin’.”
Garrett touched the edges of his vest, fingers clamping on the thin leather. “Ethan.” A blush rose in her face, like light glowing through pink frosted glass. “I don’t want to end this. We . . . we could meet in secret, now and then. No one would have to know. We would make no claims on each other. We’ll just . . . do as we please.”
The way she fumbled with the words, so unlike her usual precise way of speaking, devastated Ethan. He could only guess what it cost her to lay open her pride like this. He wasn’t certain what she was offering, or even if she knew. Not that it mattered. He wanted, craved, needed anything she was willing to give. Buthe had to make her understand that it was impossible. And even if it were, the idea was beneath her.
“Have you had that kind of arrangement with a man before?” he brought himself to ask.
Her eyes were the green of deep summer and lush growing things. “I’m a woman who makes her own decisions and handles the consequences.”
“That means no,” Ethan said softly. At her silence, he continued, “You’d be risking your reputation. Your career.”
“Believe me, I understand that better than you.”
“Have you ever shared a bed with a man? Even once?”
“Why is that relevant?”
Her evasive response sent a pleasure-pang down to the pit of his stomach. “That means no,” he said again, his voice even softer than before. He took a slow breath, trying to steadyhimself, while his blood sang with the knowledge that she’d been waiting for him. She was meant to be his. God, he wanted her beyond any reckoning of earth or heaven. But her well-being mattered a thousand times more than his own desires.
“Garrett . . . I’m a man full o’ trouble. When I vowed to let nothing harm you, I included myself on that list.”
A frown crimped her forehead. She closed her grip on his vest until her fists were tight as pine knots. “I’m not afraid of you, or your trouble.” Her green eyes were narrowed and intent as she tugged him closer. “Kiss me,” she urged in a whisper.
“I have to go,” he said shortly, and pulled back while he was still able.
But Garrett moved with him, her hands reaching up to grip his head on either side, the way he’d taught her at Baujart’s. The strength of her fingers electrified him.
“Kiss me,” she commanded, “or I’ll break your nose.”
The threat startled a ragged laugh from him. He shook his head as he looked at her, this fearsomely capable woman who loved geese and was afraid of spaghetti, and could either wield a scalpel in a complex surgical procedure or use it as a throwing-knife.
There had always been a cold streak in him, but he couldn’t seem to find it now, when he needed it most. He was breaking apart inside. He would never be the same after this.
“Christ, you’ve ruined me,” he whispered.
His arms went around her, one hand gripping the heavy silken mass of her braided chignon. She guided his head down, and he lost the battle, all his will vanquished as he began to kiss her as if the world were about to end.
For him, it was.

New York Times bestselling author Lisa Kleypas graduated from Wellesley College with a political science degree. She is a RITA award winning author of both historical romance and contemporary women’s fiction. Her novels are published in fourteen different languages and are bestsellers all over the world. She lives in Washington State with her husband Gregory and their two children.