Release Blitz for More Than Love You by Shayla Black

Readers will find themselves drawn to this scorching tale of a relationship begun as a distraction that soon becomes more meaningful.  Keep reading to get a tempting taste of More Than Love You by Shayla Black, then add this third installment in the More Than Words series to your bookshelf! 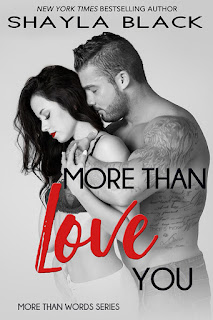 I’m Noah Weston. For a decade, I’ve quarterbacked America’s most iconic football team and plowed my way through women. Now I’m transitioning from star player to retired jock—with a cloud of allegation hanging over my head. So I’m escaping to the private ocean-front paradise I bought for peace and quiet. What I get instead is stubborn, snarky, wild, lights-my-blood-on-fire Harlow Reed. Since she just left a relationship in a hugely viral way, she should be the last woman I’m seen with.
On second thought, we can help each other...
I need a steady, supportive “girlfriend” for the court of public opinion, not entanglements. Harlow is merely looking for nonstop sweaty sex and screaming orgasms that wring pleasure from her oh-so-luscious body. Three months—that’s how long it should take for us both to scratch this itch and leave our respective scandals behind. But the more I know this woman, the less I can picture my life without her. And when I’m forced to choose, I’ll realize I don’t merely want her in my bed or need her for a ruse. I more than love her enough to do whatever it takes to make her mine for good. 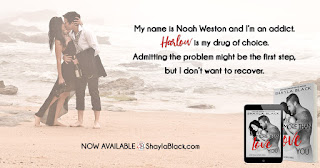 PREVIOUS INSTALLMENTS IN THE MORE THAN WORDS SERIES... 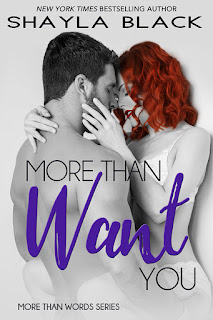 MORE THAN WANT YOU (More Than Words, Book #1)
I’m Maxon Reed—real estate mogul, shark, asshole. If a deal isn’t high profile and big money, I pass. Now that I’ve found the property of a lifetime, I’m jumping. But one tenacious bastard stands between me and success—my brother. I’ll need one hell of a devious ploy to distract cynical Griff. Then fate drops a luscious redhead in my lap who’s just his type.
Sassy College senior Keeley Kent accepts my challenge to learn how to become Griff’s perfect girlfriend. But somewhere between the makeover and the witty conversation, I’m having trouble resisting her. The quirky dreamer is everything I usually don’t tolerate. But she’s beyond charming. I more than want her; I’m desperate to own her. I’m not even sure how drastic I’m willing to get to make her mine—but I’m about to find out. 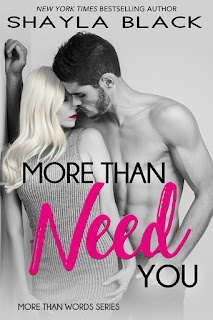 MORE THAN NEED YOU (More Than Words, Book #2)
I’m Griffin Reed—cutthroat entrepreneur and competitive bastard. Trust is a four-letter word and everyone is disposable…except Britta Stone. Three years ago, she was my everything before I stupidly threw her away. I thought I’d paid for my sin in misery—until I learned we have a son. Finding out she’s engaged to a bore who’s rushing her to the altar pisses me off even more. I intend to win her back and raise our boy. I’ll have to get ruthless, of course. Luckily, that’s one of my most singular talents.
Sixty days. That’s what I’m asking the gritty, independent single mother to give me—twenty-four/seven. Under my roof. And if I have my way, in my bed. Britta says she wants nothing to do with me. But her body language and passionate kisses make her a liar. Now all I have to do is coax her into surrendering to the old magic between us. Once I have her right where I want her, I’ll do whatever it takes to prove I more than need her.

Shayla Black is the New York Times and USA Today bestselling author of more than fifty novels. For nearly twenty years, she’s written contemporary, erotic, paranormal, and historical romances via traditional, independent, foreign, and audio publishers. Her books have sold millions of copies and been published in a dozen languages.
Raised an only child, Shayla occupied herself with lots of daydreaming, much to the chagrin of her teachers. In college, she found her love for reading and realized that she could have a career publishing the stories spinning in her imagination. Though she graduated with a degree in Marketing/Advertising and embarked on a stint in corporate America to pay the bills, her heart has always been with her characters. She’s thrilled that she’s been living her dream as a full-time author for the past eight years.
Shayla currently lives in North Texas with her wonderfully supportive husband, her teenage daughter, and two spoiled tabbies. In her “free” time, she enjoys reality TV, reading, and listening to an eclectic blend of music.