A rock star feeling lost and alone finds a kindred spirit in another rocker on the cusp of fame as they lose themselves in partying only to find happiness in each other’s arms when out of the harsh light of fame in this scorching m/m read.  Keep reading to get a tempting taste of Bulletproof by Jenna Galicki, with its combustible main couple dealing with issues of fame and painful pasts, then add this fourth installment in the Bulletproof series to your bookshelf! 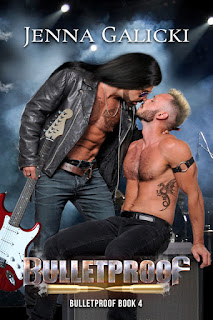 Derek MacAlister, the wild one. Known for dancing on table tops, partying too hard and possessing a never-ending thirst for excitement. With his bandmates now settled in committed relationships, he’s the last man standing. The only problem is that he wants to party all night long, but his best friends are content to stay at home. Enter Travis Fontana, a bad boy with a reputation for trouble, and Derek has his partner in crime.
Travis Fontana just scored the gig of a lifetime opening for the nation’s top heavy metal band. He’s a rebel who thrives on pushing the limits of a good time and Bulletproof’s sexy long-haired guitarist, Derek MacAlister, is right by his side to share the fun. Together, they’re double trouble.
But all is not as it seems. Underneath the painted-on smile and carefree exterior that Travis shows the world lies a tortured soul with a dark past. Little by little, Travis lets Derek see a side of him that no one else knows. Derek, unused to the unfiltered raw honesty that Travis shares, finds that he wants to take care of this troubled, vulnerable man and turns out to be Travis’ rock in times of crisis.
When the pressures of new-found fame begin to overwhelm Travis, he quickly starts to unravel. Pushed to the breaking point, it becomes clear that even Derek can’t save him. Travis needs to save himself. 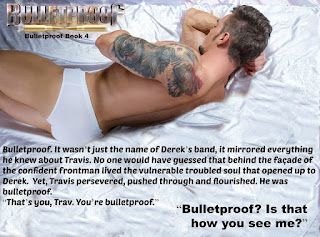 THE PREVIOUS BOOKS IN THE BULLETPROOF SERIES: 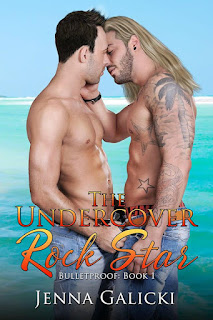 THE UNDERCOVER ROCK STAR (Book #1)
A spur-of-the-moment vacation was supposed to jolt Cameron Douglas out of his funk, but it appears he only traded locations. It was a chance meeting with a handsome stranger that changed everything. Brandon stirs Cameron's interest and his heart, but will the mysterious man reveal his true identity before their vacation in paradise is over?
Sometimes life in the spotlight was a heavy weight to bear for Brandon Bullet. He never knew if men were interested in him as a person or just enamored with his rock star status – until he meets Cameron Douglas. It wasn't often that Brandon shared a connection with someone who wasn't aware of his notoriety. He's determined to keep his identity a secret while the two of them get to know each other and before someone blows his cover. 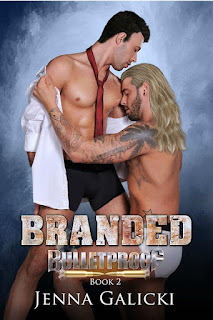 BRANDED (Book #2)
It was a chance meeting in paradise that caused them to cross paths. Destiny brought them together.
These two alpha males met with the force of a head-on collision. Sirens went off and lit up their hearts faster than a flash fire. But now that they’re living in the real world, everything isn’t as easy as anticipated. Other than their strong-willed and dominant personalities, they couldn’t be more opposite.
As the front man for a world-famous heavy metal band, Brandon Bullet lives in the spotlight. He thrives on the attention of his fans and wild parties that all rock stars are accustomed to.
The free-spirited attitude and uninhibited lifestyle that is so natural to Brandon totally contradicts with Cameron Douglas’ anal-retentive, structured mindset. Spurred on by a thirst for adventure, Cameron’s ready to leave behind his sedate, low-key life, but he’s unprepared for the rock star’s world of free sex, drugs, and non-stop parties.
Concessions aren’t always easy when thrust into a new relationship, especially with two head-strong men who constantly challenge one another. Add time apart from Bulletproof’s promotional tour, and it’s another layer of adjustment to contend with that just may push this new relationship too far. 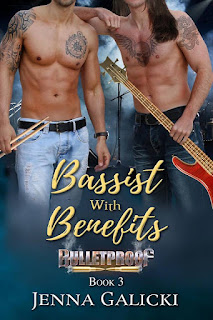 BASSIST WITH BENEFITS (Book #3)
Bandmates and best friends since they were teens, Jeremy Kagan and Alan Delgado share everything – including men. But their brotherly bond was shattered during one incident of mistaken identity in a darkened bedroom when a line was crossed. With boundaries broken and the line of friendship blurred, they struggle to move forward.
For Jeremy, that night was a dream come true. He had been in love with Alan for a decade but had been too afraid to bare his heart and reveal his true feelings. Now that the opportunity has presented itself, he’s ready to seize the moment. This is his one chance to be with the only man he’s ever loved.
Alan, on the other hand, isn’t dealing with the incident so well. A lot of monumental achievements have occurred in his life, but none were as life altering as a single erotic encounter with his best friend. The usual fun-loving camaraderie he and Jeremy had always shared is now awkward and uncomfortable.
Unable to shed the memory of their rendezvous, Alan starts to look at Jeremy in a new light. Transitioning from bromance to romance isn't as easy as expected, especially since Alan isn’t ready to share their newfound bond with anyone else. Stress from keeping their relationship a secret turns explosive as these two battle their passion in private. Now they need to figure out if it’s worth risking everything, including their friendship, in order to pursue a future together as a couple. 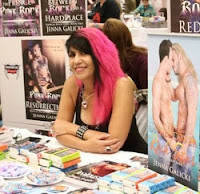 Jenna Galicki writes in multiple genres, including m/f, m/m, and m/m/f.
She is a strong advocate for LGBT rights and marriage equality.
A native New Yorker, she recently relocated to Southern California where she lives with her husband and two dogs. She's a Rottweiler enthusiast and an avid music buff. When she's not hunched over a computer, you can find her front row at a rock concert.
She also makes adorable commemorative prints for books signings and special events - a keepsake to have signed by the attendees that can be found HERE.