Fans of MC-fueled romances will find themselves drawn to this exhilarating tale teeming with suspense and sexual tension as a young woman with a difficult childhood finds a connection to a biker with issues of his own to deal with.  Keep reading to get a tempting taste of Outlaw Ride by Sarah Hawthorne, along with my impressions of it, then add it to your bookshelf.  In honor of this third installment in the Demon Horde series make sure to fill out the form below for the chance to win a Kindle Fire 7 too! 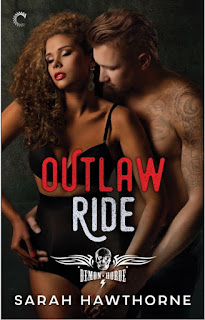 A recovering gambler
Hard-living biker Clint Remmick is fiercely loyal to the boys of the Demon Horde motorcycle club. He’s worked hard to redeem himself, and there’s no risk he won’t take to help his brothers, even when rivals threaten their safety. When his grandmother’s health takes a turn for the worse, though, he moves out of the clubhouse to take care of her. With his duties for the MC, he knows he can’t do it alone, so he hires Jo, a live-in nurse.
He didn’t expect her to heal him, as well.
A dedicated nurse
Jo Smith enjoys working for sweet old Anne Remmick, and she’s especially intrigued by her tattooed bad-boy grandson. Clint's tough exterior scares her a little, but she feels a pull toward the sexy biker. Soon she’s dying to close the distance between them.
A losing bet
When Clint and his brothers have to pull a dangerous job in Reno, Jo is the perfect cover. With enemies around every corner, Clint needs to focus on keeping her safe—not the lust simmering between them. But when Clint is trapped by a rival club, Jo will have to save him…and their relationship.

“What’s going to go bad?” I rinsed the soapy pan.
“I can’t tell you,” he said. Clint put his index finger on my shoulder and ran it down my arm. Tingles began to fire all over my body, and I shivered. Was this some sort of seduction? If it was, would I allow myself to fall into his trap?
Yes.
“Oh.” I couldn’t think of anything else to say. His finger was running back up the length of my arm now. “Is this the first time you’ve ever had to do something like this?”
“No,” he whispered against the back of my neck. He was standing behind me now, and I could feel his body heat. “I’m just more scared this time around.”
He was scared? I tried to catch his gaze in the window behind the sink, but he ducked his head behind me. He placed both hands on my lower back and began to knead. This was bad, so bad. I wanted him too much and he was confessing his fears to me. Just like you would do if you loved someone.
“Tell me what you’re afraid of.” I whispered, leaning back against him. He felt dangerously good.
“I’m afraid of not coming home,” he murmured. He slid his hands over my belly and pressed me against him. Through my thin cotton panties, I could feel him, hard inside his jeans. I started to grind against him. “I’m afraid of not seeing you again.”
“You don’t see me now,” I whispered. I meant for it to come out as a bitter condemnation, but his hands slid up over my breasts and I could barely breathe.
He took one of my nipples between his fingers and pinched it. I gasped.
“I need you, Jo,” he growled. I tried to turn, but he held me in place. “I know I don’t deserve it.” His voice was rough, as though he dragged it across gravel. His other hand slid down, between my legs. “Come to bed with me. Just this, tonight.”
I was already wet. I wanted him, he knew I wanted him. There was no point in denying it. But he was so raw, I had to find some way to distance myself and try not to fall in love with him. If I went back to his bedroom, the intimacy would doom me.
“Here,” I demanded, rubbing my ass against his dick. “Here in the kitchen. Do you have a condom?”
“Yes, but I want to taste you first.” He began sliding my cotton panties down my legs. “Why don’t you sit up on the counter?”
“No.” I squeezed my eyes shut, picturing it. It had been one of our favorite things. Clint’s face would be buried in me and he’d look up. We’d share my orgasm together. Just like our last time together.
My breath started to come in short bursts. I couldn’t do it. I couldn’t let him be that close.
“No, from behind. Right now.”
He froze. I knew he was hurting and this wasn’t exactly what he wanted. He wanted that connection, those emotions that we used to share, but I couldn’t leave myself open to his hurt again. I waited for him to tell me no. Would he choose all or nothing? Or just take what I was offering? 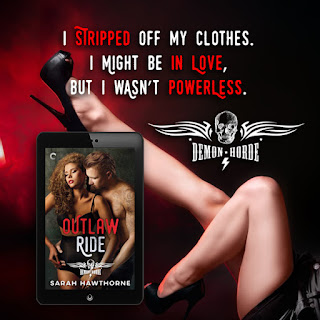 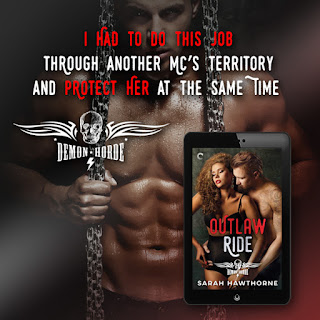 Fans of MC-fueled romances will find much to like about this tale of two people trying to leave their pasts behind them as readers get quickly captivated by its sensual and suspenseful premise.  From sweet to scorching interludes, while hanging on to the edge of your seat as this couple rides right into danger, readers will be left satisfied by the turn of the final page while waiting for the next installment in this enticing series.

Jo Smith’s life growing up was tough, full of judgments based on her biraciality and for her family doing whatever they had to in order to survive.  The taunts haunt her still but they also drive her to make a better life for herself.  At the end of her nursing studies she agrees to take on one last patient before graduation and it’s a decision that changes her life irrevocably as she’s introduced to a man that makes her want to throw caution to the wind.  The closer they get to each other the more caught up she becomes in his world in scenes that showed a tough girl hiding behind a quiet and naive facade.  When his past comes back to haunt him though she’ll be left in limbo with her heart and life on the line.  Jo’s a likable heroine who’s risen above her troubled beginnings, but she’s not forgotten how to stick up for herself when needed. She’s a kindhearted woman though who doesn’t like complications as she’s focused on her career and doesn’t want to jeopardize it.  Clint calls to that caring side and together they’re combustible in a relationship with only a bit of angst to mar its dreamy evolution.

Clint Remmick is a recovering gambling addict bent on making amends to those he hurt over the years.  To his Club he’s just crafted a business venture that gets them a bit closer to law-abiding, while for his ailing grandmother he’s opened up his home to help care for her.  He’s trying to live the life of a good man but knows he still has a long way to go to get there.  The moment he meets Jo he’s drawn to her and can’t help lending her a hand out of his growing admiration for her.  Though a relationship with her isn’t the best idea with everything stacked up against them, he can’t help claiming her and bringing her into his world.  When the temptation of his past rears its ugly head there’s even more fear entering into their relationship that leads to a heartbreaking decision that left their HEA in doubt.  Clint’s immensely appealing, sexy and a bit rough around the edges but with a heart of gold.  He goes out of his way to show his softer side in scenes that endeared him to me.  Though I could understand his rash decision late in the story it still frustrated me as it was unnecessarily melodramatic.  Despite this, and despite the roughness he shows to the world, I still found him to be a decadent delight who put a smile on my face.

Though this is part of the Demon Horde series it stands strongly on its own due to its strong-willed main couple whose interactions were sweet and sexy. They’re a dynamic duo who made each other better as Jo brought out Clint’s protective instincts while Clint gave Jo the security and stability she’s always longed for.  The MC world is usually depicted as dangerous and bloody, full of eroticism, but in this book it’s down-played.  There’s hints of excess but the focus is more on family as past couples interact with the new couple on the block, Jo and Clint.  Jo may start off sweet but as the story progressed she proved herself as an “Old Lady” as she stood by her man in a moment of danger.  While there were many couples inhabiting this story there were still a few brothers who left a lasting impression on me and a hope that we’ll see them get their own HEA in the future.  On a whole this was a pleasant read with a nice balance of heat and heart that kept me turning the pages in anticipation and immense satisfaction. 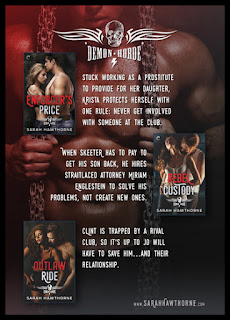 Sarah Hawthorne lives in the Pacific Northwest where she drinks too much coffee, plans a lot of vacations and writes romance novels. Her native habitats include her garden and the local library.

a Rafflecopter giveaway
at February 08, 2018