Book Tour for Break Down by Rebecca Norinne (Review)

The exhilarating and gritty world of rugby is on vivid display in this angsty m/m tale about sexuality and coming out.  Keep reading to get a tempting taste of Break Down by Rebecca Norinne, along with my impressions of it, then add this scorching fourth installment in the Dublin Rugby series to your bookshelf too! 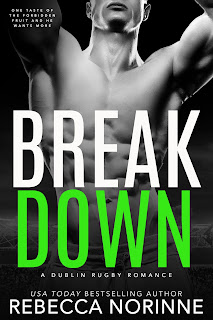 He knows his place on the pitch, but life is a whole other game.
All his life, Liam Donnelly looked and wondered. Could he? Would he? And then, finally, he did. But when he sampled a taste of that forbidden fruit, his whole world came crashing down, his position with Dublin Rugby right along with it. When the chance to ply his trade in Edinburgh comes along, Liam jumps at the offer, knowing it could be his best opportunity to start fresh and get back to the man he once was. But one look at Chef Lachlan MacLeod-his knowing, whisky-colored eyes, the abrasive scruff dotting his jaw, and the colorful ink lining his forearms-and Liam's wondering all over again. Can he? Will he? His heart says no, but his body says yes. Too bad love is never that simple.
He's conquered his own demons; can he help another man do the same?
Out and proud Chef Lachlan MacLeod has no problem with who he is, except he has a history of hooking up with bi-curious straight men. He's vowed never to go down that path again, but when Liam Donnelly shows up in his restaurant, his eyes filled with heat and secret longing, Lachlan can't help himself. He knows the closeted rugby player is a terrible idea, but the man calls to him in a way no one ever has before. What started as a safe way for Liam to explore his sexuality quickly morphs into something much deeper, and now Lachlan wants more. But can his heart reconcile what his head already knows-that loving the gorgeous, broken athlete might actually mean letting him go? 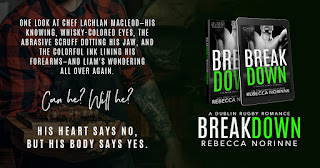 Through three previous books Ms. Norinne has pulled readers into the exotic world of rugby, made us sweat and bleed alongside these muscular and manly athletes in stories that have thoroughly entertained me.  With this fourth installment readers get a new view as the action’s moved to Edinburgh with a new set of teammates for the aging Liam Donnelly to get to know.  It’s a difficult time for the normally jovial player though as he’s not only dealing with the end of his career on the horizon, but is also struggling with his sexuality after an encounter that he’s long dreamed of leaves him full of self-doubts and fearful of discovery.  Moving to Edinburgh gives him the chance to start fresh, but also puts temptation right in front of him in the form of a cocky and sexy chef carrying his own weighty baggage.  What starts out as friendship soon becomes more as long talks lead to clandestine kisses that soon involves both of their hearts.  But when Liam’s fears over coming out make Lachlan feel like a dirty little secret, their journey to HEA hits some very bumpy roadblocks that made my heart ache and left their happy ending in doubt.

Liam Donnelly’s become a rugby star in Dublin, but injuries and age has left his future in doubt.  Going where the money is gives him a fresh start but also leads to lots of angst as he finally comes to terms with who and what he is after years of denying what his heart and mind truly desire.  Liam’s always been seen as a manwhore flitting from one one-night stand to another but it’s his attraction to men that’s always tempted him and once he meets the chef at the restaurant down the street he’s very tempted.  Being with Lachlan is both invigorating and terrifying as being with him means getting to experience things he’s long dreamed of but also means addressing long-buried feelings that cause a lot of emotional upheaval to their combustible relationship.  Liam’s immensely appealing with his realistic fears and self-doubts that endeared him to me.  His struggles had me wanting to hug him and his raw emotions with wanting to do right by Lachlan but making mistakes along the way had me rooting for him endlessly.  Readers get moments of deep insight from him as the struggle to come out is vividly depicted and keeps readers invested wholeheartedly in his and Lachlan’s rocky romance.

Lachlan MacLeod‘s past is one of heroin addiction and numerous nameless sexual encounters.  Six years have passed since then and his life is finally on track as an award-winning chef who’s proudly out of the closet.  Years of hiding who he was, years of feeling used and unimportant, have him unwilling to go back in the closet though despite his intense attraction to Liam.  What starts out as a friendship where he’s a supportive sounding board to the struggling man soon has him putting his heart and soul on the line in hopes that Liam will finally claim him to the world.  Through all their emotional ups and downs Lachlan remained a supportive friend and mentor.  Through their erotically-charged encounters to frustrating talks I applauded him for staying true to himself.  He easily could’ve fallen back on bad habits to cope but he didn’t.  His past is clearly something he’s not proud of but he doesn’t sugarcoat it and learned from it to make sure he never lets himself be devalued again.

This was an angsty romance teeming with sensuality as Liam and Lachlan undertook a long dance to finally get between the sheets.  An emotional tug of war and lots of foreplay kept me on edge, waiting for them to finally give in to temptation in encounters that were well worth the wait.  They’re a dynamic duo with a connection that crackles.  There’s a lot of talk and compassion in their relationship, with each step forward a dramatic one, and I cheered them on every step of the way.  The issue of coming out is realistically depicted here, with Liam’s concerns understandable and his fears palpable considering a past encounter.  I might be frustrated by how long it took Liam to work through his issues, but when he finally did he did so in subtle and bold ways that had me cheering and liking him all the more.  Lachlan too is a delightful character who wore his heart on his sleeve.  He was a good friend and a caring lover and I loved the two of them as a couple.  Surrounding this appealing main couple were a cast of new teammates who seemed like furniture early on but finally became more real as the story progressed.  They became more well-rounded with backgrounds just hinted at that have me wanting to know more.  Liam’s old teammates and friends also make appearances to show their unwavering support while setting up the next story in this series for the miserable newlywed Aidan and his unrequited love Tanya.  On a whole this is a decadently delightful m/m read full of heart and soul with just enough action on the field for fans of sports-fueled romances to celebrate while providing plenty of bedroom action for lovers of romance to wrap themselves up in!