Fans of paranormal romances will find themselves drawn to this multi-layered, erotically-charged tale set in the vampiric world.  Keep reading to get a tempting taste of Pure Healing by Aja James, along with my impressions of it, then learn even more about this book by visiting the other sites hosting this tour.  In honor of this first installment in the Pure/Dark Ones series make sure to fill out the form below for the chance to win a $10 bookstore GC too! 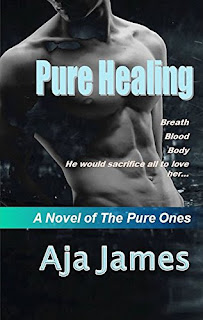 Enter the world of Pure Ones, a race of immortal, supernaturally powerful beings who protect humankind, where sexual intercourse with anyone other than one’s Eternal Mate leads to a slow, painful death within thirty days.
The Healer of the race, Rain, is the only exception to this rule. To harness and accumulate enough energy to heal severe wounds, especially as the war between her people and the vampire hordes accelerates, she must take a Consort once every ten years and draw strength from his blood and body. But as the war wears on, few Pure-males who are strong enough to serve as her Consort remain. Valerius, Protector of the race, is the strongest candidate.
Despite their instant attraction ten years ago when they first met, Valerius has staunchly avoided applying to be the Healer’s Consort. The brutality and violence he suffered as a Roman sex slave in his human life ate away at his soul, leaving a dark abyss of torment and self-doubt.
Now, as Rain’s strength drains with every healing act, Valerius cannot escape the fact that he may be the only one who can save her, and in so doing, afford his people greater hope for the future as battles intensify.
Will Rain and Valerius find their way to each other as the struggles between good and evil evolve?

Rain bid farewell for the day to the third qualified Pure-male and watched him slowly and painstakingly make his way beyond the threshold of the Rite Enclosure.
She closed her eyes and released a pent up breath.  It had been a long second day in the three-day Rite of the Phoenix, a day she looked forward to only slightly less than the third and final day.  Today, she had pushed the males almost beyond their endurance.  She was surprised they hadn’t decided to withdraw their application.
The Phoenix Cycle would be much worse.
As she prepared to leave the chamber, Wan’er came forth with a nonplussed expression.
“My lady,” her handmaiden said haltingly, “it appears you have one final applicant.”
“What?” Rain responded reflexively.  She heard her handmaiden perfectly well, but the words didn’t make a lick of sense.
Wan’er shifted a bit nervously, as if indecisive about how to break some bad news.  “Your final applicant is waiting in the antechamber.”
She bit her lower lip and blurted, “It is my lord Valerius.”
Rain’s eyebrows shot up in shock.  Surely she had not heard correctly.
“Shall I show him in and prepare him for the test?” Wan’er asked tentatively, uncertain of her lady’s mood.
Without answering her handmaiden, Rain marched angrily to the antechamber and threw apart the double doors.
“Just what do you think you’re doing?” she demanded of the warrior leaning against the back wall.  She braced herself against the welcome sight of him in full health.  She’d been on tender hooks all the previous day, wondering whether she’d been able to heal him completely, whether she should have checked on him.  She could barely concentrate on the first day’s tests, she’d been so distracted.  But now that he appeared fully recovered, her anger overrode all concern.
He straightened from the wall and stood tall and alert before her.  “Applying to Serve you, Healer.”

Into the crowded paranormal genre comes this intricately woven series starter full of suspense, intense emotions, heartbreaking choices, and romances that pull at your heartstrings.  It’s a tale full of interconnected storylines that sometimes overwhelmed but always entertained in a book that left me satisfied and ready for more.

Love in the world of the Pure Ones is complicated as they’re sworn to remain celibate until finding their true mate with death the result for giving into temptation with the wrong person.  The one individual who doesn’t have to abide by the rules is Rain, the Healer of their people, as every ten years she must choose a Consort to replenish her powers.  For thirty days she joins with her Consort in numerous scorching encounters but never forms an emotional connection...until the day she meets the Protector, Valerius.  She longs for him like no other but his past has left him bruised and unable to connect with her as much as she longs for him to do.  As attraction causes chaos in their personal lives an outside force is waging war and leaving behind decimation as death heartbreakingly takes away characters we immediately came to care for while leaving other characters hanging in the balance.

This is a story with intricate worldbuilding, taking us into the past while immersing us in the here and now of these compelling characters in a society that’s existed for thousands of years.  The Pure Ones are an intriguing society whose powers were given to them upon death in order to give them their deepest desires and it gives deep insight into who they are.  They’re strong-willed and protective of each other as well as their Queen and it gives an unexpectedly heartwarming familial vibe to the story.  Many storylines are being juggled from the first page to the last, many characters introduced that sometimes becomes too much, but overall it’s a story that packs a powerful punch.  The romance between Rain and Valerius is a heartbreaking one, erotically-charged too in an unrequited love that put me through the wringer alongside them.  Valerius especially brought tears to my eyes for all the degradations he endured before his death and the bruises it’s left him with that are keeping him from his HEA. Rain’s caring and full of strength that belies her childlike stature and she’s just the person to heal him if they’re just willing to put their hearts on the line. Along with this epic and emotionally intense romance comes a battle just beginning to be waged.  It’s a battle full of manipulations being directed by a mysterious and truly disturbing villain. There’s a foreboding feeling permeating the story where not everyone is to be trusted, nor is everyone safe as casualties soon had me reaching for the tissues. Though some will compare this to Ward’s Black Dagger Brotherhood, that would be a mistake as there’s much to set this apart from the other books in the genre.  It’s an unforgettable tale that kept me on the edge of my seat, with plenty of storylines just beginning, and counting down the days until the next installment hits bookshelves! Aja has been writing stories since the age of six, and novels since the age of thirteen. While she'd be the first to admit that those early efforts weren't particularly good, she sure loved putting them down on paper!
The best part of writing, according to Aja, is that it’s completely organic, the way the stories develop. When the inspiration hits, she writes just so she herself can learn where the characters are headed because oftentimes, they take her by surprise! It is her ultimate dream to share her stories with as many readers as she possibly can.
Her other loves include art, cooking, old movies (anything with Audrey Hepburn, Marilyn Monroe, Robert Redford, Vivien Leigh, Elizabeth Taylor, Paul Newman, Clark Gable, and all the song and dance numbers because she can’t watch them and not be happy!)
She adores taking long walks with her husband and running after her two rambunctious kids. She has traveled extensively (all seven continents except Antarctica) and has a multi-cultural upbringing. She speaks two and a half languages and binge watch TV shows when the mood strikes.
Aja has a Bachelor’s of Arts in Comparative Literature and Economics and two Master’s degrees, one of which is in East Asian Studies.

a Rafflecopter giveaway
at February 28, 2018