Fans of the historical genre will find themselves drawn to this tale of revenge and unexpected love set in the highlands of Scotland between a woman in hiding and a man bent on avenging his brother who gets caught up in clan war.  Keep reading to get a tempting taste of Highland Conquest by Alyson McLayne along with getting Ms. McLayne’s top six favorite romance couples, then count down the days until it releases on February 6th.  In honor of this second installment in the The Sons of Gregor MacLeod series make sure to fill out the form below for the chance to win 2 copies of this book too!

A MESSAGE FROM MS. MCLAYNE... 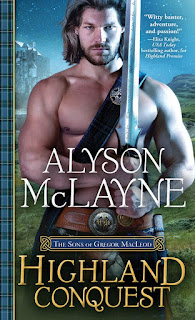 HE WAS LOOKING FOR VENGEANCE
INSTEAD HE FOUND HER
Laird Lachlan MacKay never planned on leading his clan, but when his older brother was murdered, he was left with no choice. His vow to avenge his brother has led him to the MacPherson clan—and their bewitching healer, Amber.
Amber MacPherson is desperate. Dressed as a boy to escape her clan’s treacherous leader, she runs right into Lachlan—who orders her detained. At first she causes him nothing but frustration, especially when she blackmails him into helping her clan. But when she’s threatened by the same man who murdered his brother, Lachlan will do whatever it takes to keep her safe—and by his side. 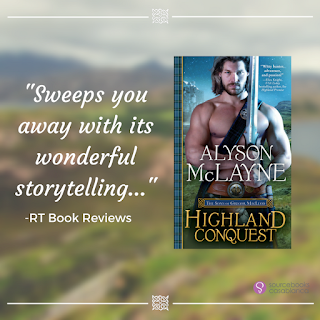 Alyson McLayne is a mom of twins and an award-winning writer of contemporary, historical and paranormal romance. She’s also a dog lover and cat servant with a serious stash of dark chocolate. After getting her degree in theater at the University of Alberta, she promptly moved to the west coast where she worked in film for several years and met her prop master husband.

a Rafflecopter giveaway
at February 05, 2018