Book Spotlight on That Killer Smile by Juliet Lyons (GIVEAWAY) 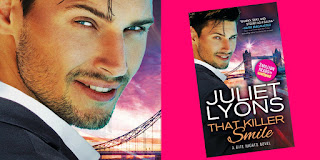 It’s an intriguing twist to the usual paranormal romance in this tale of vampires caught up in a war over dating sites that results in an unexpected connection.  Keep reading to get a tempting taste of That Killer Smile by Juliet Lyons, then add it to your bookshelf.  In honor of this third installment in the Bite Nights series make sure to fill out the form below for the chance to win a copy of the first book in this series too! 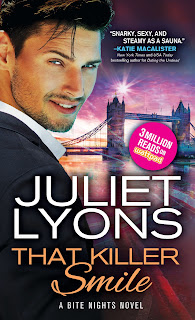 THERE WILL BE HEAT...
Vampire Catherine Adair gave up trying to find her perfect match ages ago. But that didn’t stop her from founding London’s super successful vampire dating site. When a smoldering vampire overlord from her past launches an interspecies speed-dating service, Catherine vows to crush the competition...
WHEN THESE TWO COMPETE
Ronin’s new venture is purely about getting Catherine’s attention. He hasn’t stopped thinking about her ever since the night she gave him the cold shoulder. Nobody gets away from Ronin McDermott that easily...

Cat
My first thought when I see the smashed lock is, How on earth did a burglar make it past Mrs. Colangelo?
I shove the door open and step inside. There, sitting—no lounging—in my Laura Ashley recliner and stroking Wentworth, is Ronin fuck weasel McDermott.
My eyes bulge as I absorb the preposterous scene of him sitting with my pet in his lap. He looks like an infuriatingly hot James Bond villain.
“Evening, Catherine,” he says with a nod of his head.
I glare into his intense blue eyes, fists clenching. “What the actual fuck are you doing in my apartment?”
He cocks a brow before rising from the chair, taking Wentworth with him. The latter stays snuggled under his arm, as docile as a newborn lamb.
Pointing at Wentworth, I hiss, “Did you glamour my cat?”
A cloud of confusion passes across his handsome features. “Why on God’s earth would Iglamour a cat?”
Without missing a beat, I snap, “That’s what you do to get people to like you.”
He feigns an injured look before setting Wentworth down on the carpet. Then he reaches into his shirt pocket and pulls out a tiny object. It twinkles beneath the light. “You dropped this earring in my office. It must have fallen out when you kissed me.”
I snort in derision. “Ha! Yeah, I kissed you. Good one. And you came all the way here, broke in to my apartment just to return it to me?”
“I’ll get the lock fixed,” he says, placing the earring on the coffee table. “And I didn’t break in as such. One of your neighbors let me up.”
I shake my head. “Let me guess, an Italian lady in a robe?”
He smiles and I try not to notice how it softens the hard lines of his strong features, how his cool-blue eyes are suffused with warmth.
“There’s a chance she believes lover boy next door is bisexual.”
“What the hell did you tell her?” I ask, folding arms across my chest. The mention of Peter comes as a shock. Being in the same room as Ronin McDermott, I’ve already forgotten he exists.
“Nothing she didn’t secretly long to hear. So who is this guy anyway? Should I be jealous?”
My stomach flips, my mind skipping back to that moment in his office when I left him with a hard-on in the presence of Playboy bunnies. “Jealous?” I try to inject venom into my voice, but my heart isn’t in it. “Tell me, did you enjoy yourself with those girls the other afternoon?”
His brows knit. He looks genuinely flummoxed. “What girls?”
I toss my bag onto the sofa. “Meant that much to you, did they?”
He stays frozen to the spot, brows drawn. “Do you really think I care about other girls?”
His voice is low, as cracked as splintered glass. Suddenly, it seems as if all the oxygen has been sucked from the room. As I meet his burning gaze, it’s like the last couple of days—work, my date with Peter—never happened. I’m back in his office right before his lips landed on mine.
Except this time neither of us budge.
“You’re a sickness,” he says at last in that same fractured tone. “Don’t you see? A sickness in my veins.”
My brain sifts through responses at a hundred miles per hour, but my vocal chords remain frozen in my throat. I watch him like he’s a tiger, waiting for him to strike.
But he doesn’t pounce. He sighs instead, his jaw tightly clenched. “I’ve never wanted to upset you, Catherine. I’m sorry for what I did that night—biting you and giving you my venom. I shouldn’t have lost control like that.”
“No, you shouldn’t have,” I snap.
“I’ll be honest,” he continues. “I’d be lying if I said I didn’t start the speed-dating nights to get your attention. But I had no intention of ruining your business. In a way, it’s a compliment.”
My jaw drops in disbelief. “A compliment? Are you completely unhinged? Do you really have your head shoved so far up your ass that you don’t get why I can’t stand you?”
He shakes his head, holding out his hands, palms up. There’s desperation in his voice I’ve never heard from him before. “I’ve never once tried to play the ancient card with you. I never will, no matter how badly you piss me off.”
I stare at him, half believing he doesn’t have a clue, half-angry this is just another of his manipulative games.
“This isn’t about details. It’s about the bigger picture. One you’ve never bothered to try and get your arrogant head around. Who am I, Ronin?” The happiness the evening brought is leaking out of me faster than air from a burst balloon. To my horror, a sob escapes my throat. “What am I?”
“Is this one of those bizarre feminist questions?”
“For fucks sake, what am I? Answer me.”
His eyes flash in anger, but he doesn’t flinch. “A woman. A vampire. A neurotic shrew half the time.”
“A vampire,” I repeat, ignoring the last bit.
He looks utterly and completely blank.
“You have no idea. Do you?”
When he doesn’t answer, I open the busted door as wide as it will go and wave an arm toward it. “Goodbye, Ronin.”
If he wasn’t such a misogynistic playboy, I might experience a pang of guilt as I watch him skulk past me, defeated.
Outside he pauses, spinning around to face me. “I rang you,” he says. “Every day for a month after we slept together.”
“I know,” I whisper, staring at my Dolce & Gabbana boots. “I changed my telephone number on day three.”
He emits a short, hollow laugh, and when I look up, the hallway is completely empty. I hear the slam of a door as he exits the building onto the street. 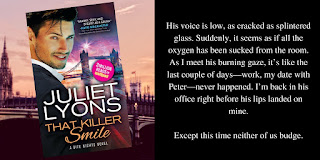 JULIET LYONS is a paranormal romance author from the UK. She holds a degree in Spanish and Latin American studies and works part-time in a local primary school where she spends far too much time discussing Harry Potter. Since joining global storytelling site Wattpad in 2014, her work has received millions of hits online and gained a legion of fans from all over the world. When she is not writing, Juliet enjoys reading and spending time with her family.

a Rafflecopter giveaway
at February 09, 2018