A struggling young man tries to make a living in the adult entertainment world but finds an unexpected connection to a veteran star on his way to burnout in this fun and flirty m/m romance.  Keep reading to get a tempting taste of Cam Boy by Quinn Anderson, along with my impressions of it, then discover even more about it by visiting the other sites hosting this tour.  In honor of this third installment in the Murmur Inc series leave a comment below letting me know what intrigues you about this book’s premise for the chance to win a $10 Riptide Publishing GC too! 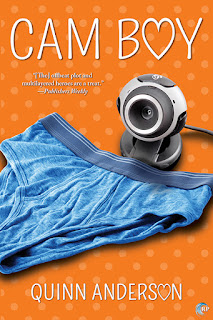 The colorful cast of Murmur Inc is back to show that love IS possible in the world of adult entertainment.  When the new boy on the block finds himself drawn to the veteran star sparks fly in this romance that’s fun, flirty, with a bit of seriousness thrown in to fully invest readers in their bumpy road to HEA. From start to finish moments of sweetness and charm are balanced with real life issues related to the industry in a tale that kept me waiting with bated breath until the very end.

Josh Clemmons is young and a bit uncertain about what he wants to be when he grows up.  Being poor and tired of struggling to make ends meet has Josh looking for a career that will make him rich and when his porn obsession leads to an unexpected audition he jumps at the chance to be a star.  While his audition doesn’t go quite as he planned it’s the connection he feels for a veteran actor that really changes his life.  Real life issues soon war with the hearts and flowers of romance in a journey that’s sometimes frustrating but always realistic as I rooted for them every step of the way.  Josh is larger than life, a bundle of energy and poor decisions, but I was still utterly charmed by him. He was like a puppy at times, eager to please and quick to be hurt by criticism.  He was quick to jump, allowed himself to act before he thought, but when it comes to feelings and honesty he wears his heart on his sleeve.  Though Josh’s life has been tough and he’s gotten a few bruises along the way he still picks himself up and rolls with the punches which made me like him all the more.

Mike Harwood had an equally tough upbringing because of his looks and his bisexuality, but with his success in the adult entertainment world he’s the one now laughing all the way to the bank.  It’s been three years of making a name for himself, three years of going through the motions like a pro, but lately it’s all starting to feel fake.  He’s become jaded, frustrated, and is also looking towards a life away from the business.  The moment he meets Josh though his life changes irrevocably as he becomes a mentor...and eventually more.  Helping Josh becomes his mission, feeding off his energy becomes his addiction, in a relationship that takes a unique path to HEA.  Mike’s a bit cold when readers first meet him, his annoyance on full display.  The moment he meets Josh though a softer side emerges, a more protective side that has him making decisions he never thought he’d make before.  Being with Josh made Mike more personable, more charming, and by the turn of the final page I couldn’t picture them with anyone else.

This was an entertaining story set in the fascinating world of adult entertainment.  Ms. Anderson vividly depicted this sensual world with all its good and bad realities, nothing was sugarcoated, and I became quickly immersed in the lives of this unlikely little family.  Though I liked Josh there were times that his melodramatic ways got a bit annoying.  His naivete was also frustrating and had me constantly worrying for his safety as he first entered the adult entertainment world.  Mike’s protective ways were much appreciated and a solid foundation for their burgeoning relationship.  There was a lot of sensuality surrounding this story but not as many actual encounters as you’d think considering the setting.  On a whole there’s a nice balance of sexiness and sweet romance that allows Josh and Mike to get to know each other after Josh’s initial audition, allows them to create a romance worth rooting for.  Ultimately the Murmur Inc series is immensely likable with a unique setting and colorful characters that has me counting down the days until the next installment hits bookshelves. 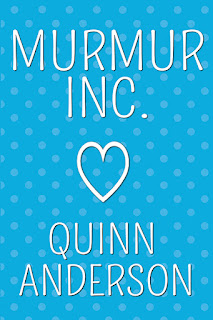 Murmur Inc.—one of L.A.’s premier adult entertainment companies—prides itself on delivering sex that’s not only hot but high-quality. For decades, they’ve been delighting their rabid fanbase with porn with actual plots, rich fantasies, and stars that boast both good looks and business savvy. And above all else, they employ beautiful people of every shape, size, color, and orientation.
There’s no shortage of talent wandering Murmur Inc’s halls, and oddly enough, no shortage of romance simmering behind the scenes. Murmur Inc. takes mixing business with pleasure to new levels. Want an inside look at the personal lives of Murmur Inc’s hottest stars? No subscription necessary.

Quinn Anderson is an alumna of the University of Dublin in Ireland and has a master’s degree in psychology. She wrote her dissertation on sexuality in popular literature and continues to explore evolving themes in erotica in her professional life.
A nerd extraordinaire, she was raised on an unhealthy diet of video games, anime, pop culture, and comics from infancy. Her girlfriend swears her sense of humor is just one big Joss Whedon reference. She stays true to her nerd roots in writing and in life, and frequently draws inspiration from her many fandoms, which include Yuri on Ice, Harry Potter, Star Wars, Buffy, and more. Growing up, while most of her friends were fighting evil by moonlight, Anderson was kamehameha-ing her way through all the shounen anime she could get her hands on. You will often find her interacting with fellow fans online and offline via conventions and Tumblr, and she is happy to talk about anything from nerd life to writing tips. She has attended conventions on three separate continents and now considers herself a career geek. She advises anyone who attends pop culture events in the UK to watch out for Weeping Angels, as they are everywhere. If you’re at an event, and you see a 6’2” redhead wandering around with a vague look on her face, that’s probably her.
Her favorite authors include J.K. Rowling, Gail Carson Levine, Libba Bray, and Tamora Pierce. When she’s not writing, she enjoys traveling, cooking, spending too much time on the internet, playing fetch with her cat, screwing the rules, watching Markiplier play games she’s too scared to play herself, and catching ’em all.

-GIVEAWAY IS OPEN TO EVERYONE.
-To be entered, LEAVE A COMMENT TELLING ME WHAT MOST INTRIGUES YOU ABOUT THIS BOOK’S PREMISE (ALONG WITH YOUR EMAIL ADDY).  NO EMAIL ADDY=NO ENTRY.
-To increase your chances of winning, comment at each of the stops on this tour.
-Winner will be chosen randomly from each valid comment left.
-GIVEAWAY ENDS AT MIDNIGHT EST ON FEBRUARY 17TH.
at February 14, 2018