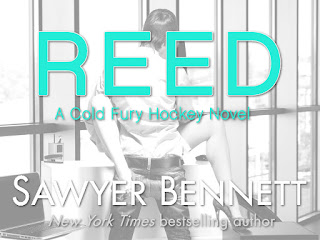 Readers looking for a sweet and sexy read will find themselves drawn to this friends to lovers romance full of erotically-charged moments and chuckle-inducing interactions.  Keep reading to get a tempting taste of Reed by Sawyer Bennett, along with my impressions of it, then get ready to add this tenth installment in the Cold Fury hockey series! 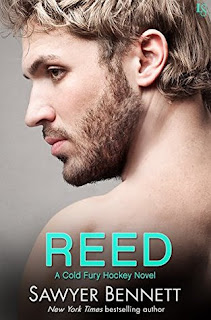 Hockey season may be over, but in New York Times bestselling author Sawyer Bennett’s new novel, a Carolina Cold Fury heartbreaker is heating things up off the ice and eager to score with the girl next door.
No one skates like Reed Olson. In the off-season, no one plays like him either. After back-to-back championships, Reed craves a different kind of action. Good thing there’s no shortage of women ready for a summer fling with a sports star. Reed has a specific type—blond, busty, not too bright—and a little black book full of options. But when his bed starts rocking, it’s his unexpectedly sexy neighbor who comes knocking. And the brainy beauty is impossible to ignore.
Josie Ives desperately needs something her celebrity neighbor obviously doesn’t: sleep. His headboard banging against the wall is keeping her up at night—not to mention inspiring some very naughty dreams. Reed is everything she imagined: a little too good-looking, with a body that puts Greek gods to shame. But he’s also funny and charming—a tempting combination. Josie’s the opposite of his type, yet the chemistry between them is undeniable. Their friendship certainly has its benefits, and it’s heating up to be so much more. 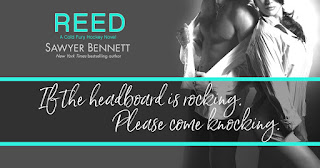 Friends to lovers romances are among my favorite themes and with this newest addition to the Cold Fury hockey series readers will find themselves utterly delighted by the sweet yet combustible romance driving this story.  From its witty and flirty banter to sentimental words and deeds readers will be quickly captivated, wrapped up in a warm blanket of charm that I’m still thinking about long after The End.

Josie Ives is dedicated to being an ER doctor, leaving her little time for friends or a social life.  She doesn’t mind not having a social life though as she’s still nursing a bruised heart after the future she thought set in stone vanished before her very eyes on an ultimatum.  The moment she meets her sexy, but annoyingly superficial next door neighbor she suddenly finds herself with an unexpected new friend who slowly becomes more in a relationship that put a smile on my face.  As their relationship deepens insecurities and a blast from the past come forth to cause a speed bump on their journey to HEA.  Through it all though Josie’s an immensely likable heroine who’s not afraid to speak her mind and it made for an entertaining verbal tug of war between her and Reed.  She’s a bit bitter at the start of the story over her ex-boyfriend Aiden leaving her to pursue his dream, but being around Reed brought out a more lively and carefree side.  She’s a bit of a homebody at times but Reed takes her outside her comfort zone in a relationship that ultimately made both of them better people.

Reed Olson is footloose and fancy free when it comes to living the life of a successful hockey player.  He’s always been content with one-night stands with women who have pretty packages but little substance.  Recently though he’s grown bored with the same old-same old...until his new next door neighbor makes an unforgettable introduction. While he’s happy to be her friend at first it soon becomes clear that the challenge she presents him with is exactly what he’s been waiting for in a connection that deepens as he tries to get her to see him as more than a friend.  Reed’s larger than life, the quintessential book boyfriend for his sexy and heartfelt words and deeds.  He treats Josie like a queen, is drawn to her for her mind and body, and doesn’t hesitate to put her on a pedestal.  He comes off as superficial early on but there’s a lot of substance to him that I enjoyed seeing revealed as the story went on.  He’s so self-assured when it comes to hockey, but when it comes to Josie and matters of love his insecurities came out.  I ached for him as he didn’t feel worthy of her but it’s quite clear to readers that he’s exactly what she needs.  Ultimately he’s a true romantic at heart and wants only the best for Josie in a relationship that charmed me from the first page to the last.

This is a pleasant romance with only a moment of angst that had me smiling from the very start due to its entertaining main couple who crackled whenever they were together.  Their banter was rapid-fire and teeming with sexual tension that culminated in the first of many erotically-charged encounters nicely spaced throughout the story. They’re a dynamic duo in a fully believable relationship where heartfelt talks balanced with scorching interludes which had me rooting for them every step of the way. Surrounding this unforgettable main couple was a small cast of secondary characters who helped drive the narrative while laying the groundwork for their own moment to take center stage.  One of those characters is Marek, Reed’s teammate, who seems equally carefree when it comes to women.  When he hears his ex is getting married though he and Reed crash the ceremony where Marek discovers a life-altering secret that leaves readers wanting more and counting down the days until his story hits bookshelves.  Though this book is part of the Cold Fury hockey series no time is spent on the ice which gives ample time to the burgeoning relationship between Josie and Reed.  Through every word and deed, through every fun and flirty act, I found myself wholeheartedly entertained by this decadent delight and recommend it to all those looking for a romance full of heart and heat! 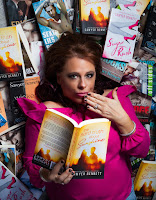