A woman looking for a no-strings coupling finds herself attracted to a man who was left at the altar in this contemporary tale that gets more complicated with each turn of the page.  Keep reading to get a tempting taste of Faking Forever by Catherine Bybee, then add it to your bookshelf.  In honor of this fourth installment in the First Wives series make sure to fill out the form below for the chance to win a $25 Amazon GC along with a digital copy of this book too! 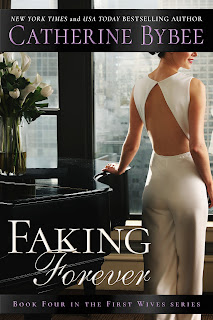 Shannon Wentworth’s biological clock is ticking, and she isn’t going to let her single status keep her from having a baby. When her wedding-photography business takes her to Mexico, she has every intention of finding a willing baby daddy to help her out. Until the bride goes AWOL, leaving Shannon to coddle the arrogant fiancé who has accused her of sabotaging his wedding.
Victor Brooks never could have imagined that he’d be on a honeymoon for one. Only here he is, taking a hard look at his life after the younger women he thought he loved walked out. The woman who volunteers to help him reflect is the last person he expects to be attracted to. Between the tequila, the sun, and one earth-shattering kiss, Victor finds Shannon a distraction too sexy to ignore.
They strike a deal: wait three months, cool off, and see if their tropical beach attraction is worth taking up when they go back home. Unfortunately, that’s just enough time for the past to come calling. All their best-laid plans are at risk. So is the last thing Shannon expected to matter the most: her heart.

Victor noticed Shannon sitting in the open dining area of the hotel the next morning, drinking coffee and reading on her e-reader. He’d spent most of the previous day licking his metaphorical wounds and nursing a headache.
Dressed in cotton pants that went midcalf and a light shirt, she looked like she was dressed for a long plane ride home. As much a pain in the ass as the woman had been, he felt compelled to say goodbye. After all, he was the reason she was there.
He walked up quietly behind her. “If it isn’t woman who fed me mezcal.”
The sound of his voice made her jump.
Too bad she wasn’t holding her coffee.
“You have got to stop doing that.”
Without an invitation, he sat and smiled. She took a deep breath and looked away, came painfully close to rolling her eyes. For some reason, he appreciated the fact she held back and wondered just how much it would take for her to disregard him with such a gesture.
“Please, sit down,” she said.
He glanced at his chair. “Thank you.”
She set her e-reader aside and regarded him. “I thought for sure you’d be back at the office by now.”
So did he. “I couldn’t fly yesterday even if I’d found a flight.”
“Oh?”
He didn’t miss the tiny shine in the corner of her eye.
“No. I had one too many the other night. Inflicting that on whoever had the misfortune of sitting next to me on the flight home was more than I could take after my flight here.”
She smiled, briefly, and lifted her chin. “I’m glad to hear you’ve evolved since Friday.”
Unable to help himself, he laughed.
Her smile returned.
Victor felt a twist in his gut, a pull to something he didn’t want to name. “I guess you’re leaving today,” he said.
She shrugged. “I am.”
He nodded. “Justin informed me you made sure I didn’t decide to go for a late night swim.”
“It was tempting. But then I realized you wouldn’t be able to pay me if you swallowed too much water.”
“Self-preserving. Very smart of you.”
“It’s a gift.”
When the woman wasn’t tossing barbs at him, she was beautiful. Perfect lines in her face, high cheekbones … he couldn’t tell if her olive skin was from an ancestor or the byproduct of living in Southern California. Not anything like anyone he’d been attracted to before.
What was he thinking? He wasn’t attrached.
Victor shook his head and stood. “Well, I saw you sitting here and thought I’d at least say goodbye.”
She stood with him and extended her hand. “For what it’s worth, I’m sorry things didn’t go as planned this weekend.”
Her fingers were long, elegant. Just like the woman. Disappointment saying goodbye was an emotion he had no business feeling. Yet there it was, like a lump in his chest.
“Are you?”
Her smile cracked. “No. But it seemed the right thing to say. I am sorry for the heartache. That’s never easy, even if it’s for the right reason.”
Victor realized he was still shaking her hand and let go.
“Goodbye, Victor. Good luck to you.”
“Goodbye, Shannon.” And because it was the appropriate thing to do once you said goodbye, Victor walked away. When he turned to take a last look, Shannon sharply moved her gaze to her coffee. 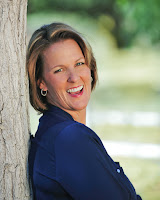 New York Times, Wall Street Journal, and USA Today bestselling author Catherine Bybee has written twenty-eight books that have collectively sold more than five million copies and have been translated into more than eighteen languages. Raised in Washington State, Bybee moved to Southern California in the hope of becoming a movie star. After growing bored with waiting tables, she returned to school and became a registered nurse, spending most of her career in urban emergency rooms. She now writes full-time and has penned the Not Quite Series, the Weekday Brides Series, the Most Likely To Series, and the First Wives Series.