A woman who’s always been on the right side of the law in her life and career finds herself caught in the crossfire as her father’s machinations put her in danger with only a dangerous kingpin able to keep her safe in this series starter.  Keep reading to get a tempting taste of Cruel Sanctuary by Tara Leigh, along with my impressions of it, then add this sensual and gritty read to your bookshelf.  In honor of this first installment in the Wages of Sin series make sure to fill out the form below for the chance to win 2 signed paperbacks and jewelry too! 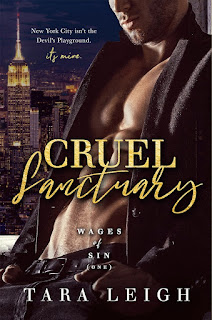 They say New York City is the Devil’s Playground.
They’re wrong.
This city belongs to me.
And so does Aislinn Granville.
She is a pampered politician’s daughter.
A decorative ornament, raised to smile and nod and do what she’s told.
Except… she doesn’t. Not with me. Ever.
In this city full of thugs and thieves, I’ve kept Aislinn safe.
From my enemies.
From me.
Until now.

“Put me down.” I keep my cool, making the demand as stiffly as if I’m asking him to pass the salt.
But my show of composure crumbles as he angles his head to look at me. Barely an inch separates the tips of our noses. I stare, entranced by the fine scar that marks his left eyebrow. I want to kiss it.
“Or what?”
“Hmmm?”
One corner of his mouth tics up, his eyes flicking away from mine. “You look damn good in my arms.”
I follow his stare and am met by our reflection in the bathroom mirror. I blink, taking in the sight of my naked body held against King’s broad chest, the tanned, inked forearms I’d practically drooled over earlier now wrapped around my back and behind my knees.
I am naked. King is dressed.
There is something indecently erotic about our image. I look like the heroine of an old Harlequin novel—a down on her luck maid or secretary about to be ravished by her big, bad boss. A powerless woman soon to be stripped of her virtue.
I know what it’s like when a man overpowers a woman. When he uses force to take what’s not his. To hurt and abuse and terrorize.
And I know that this isn’t that.
It may not look like it, but I have the power in this situation. Damon King came to me. First at my apartment and now in his. He broke down two doors tonight.
I may be naked, but the only reason he’s touching me is because he knows I want him to.
Emboldened, I look away from our reflection and directly into King’s eyes again. Leaning in, I brush the tip of my nose against his. “Kiss me.”
I’ve barely pushed the words out when his lips are on mine. The taste of him is an explosion inside my mouth. Smooth and potent, but with a hint of mint. As if he swilled some of that Balvenie from his bar and then sucked on a peppermint candy.
He kisses like a conqueror. Stealing my breath along with the last of my reservations.
He kisses like a king. Staking his claim, demanding his due. 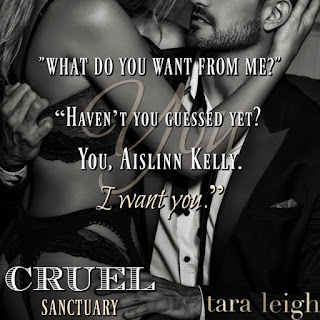 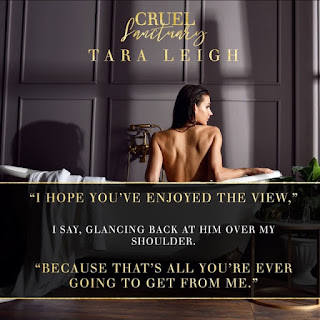 From the very first page Ms. Leigh has crafted an atmospheric tale teeming with sensuality and suspense as two seemingly very different people find a connection amidst all the danger.  When honorable and hard-working daughter Aislinn Granville’s life is threatened because of her father’s actions, a commanding and dangerous man who hides in the shadows of the criminal underworld will be the only one to keep her safe.  Close quarters soon lead to truths being realized and secrets being revealed that bind this captivating couple together even tighter while changing how they view themselves and each other. With each turn of the page my heart pounded harder as this sizzling story raced to its exhilarating cliffhanger conclusion.

Aislinn Granville has always been seen as the princess of her father’s heart, living a happy life, being dutiful and being the one to keep him being seen in a positive light.  The reality though isn’t as pretty as a childhood event has left its mark emotionally with memories rushing once again to the forefront.  The feelings between her father and her are also complicated as he’s a very cold and demanding man who sees her as a prop, a very useful one when his political career is now being threatened.  To clean up the mess he’s willing to sacrifice his daughter in order to gain the assistance of the notorious Damon King which puts her in the hands of the Devil himself with fireworks the result.  Aislinn always thought her father would never compromise his principles but upon learning just how wrong she’s been throws her for a loop, leaving her adrift and vulnerable to the protectiveness of Damon.  From the moment they meet she sees him as a criminal, but she can’t deny her attraction to him.  Learning the truth about her father has her wanting to cast off her good daughter role and giving into the tempting Damon seems like the perfect way to do that.  Every interaction she has with Damon is teeming with sexual tension, leaving her warring with herself and him in a constant battle for dominance that made for many erotically-charged encounters.  Through it all Aislinn’s no wilting flower as she gives as good as she gets, stating what she wants even when she hates herself for her attraction to someone she’s always thought she should hate.  Life for her has always been black and white, but learning the truth about her father’s actions has her seeing all sorts of greys.  The more time she spends with Damon the greater the dichotomy she discovers as beneath his dangerous facade is a man very protective or her, a man willing to give her the world. Between scorching interludes in and out of the bedroom Aislinn discovers even more secrets from her past, some that Damon has a hand in, which changes everything and ultimately puts her in even greater danger that I can only hope Damon can save her from.

Damon King’s a true anti-hero, a man who’s spent time in prison and made his wealth through all that he learned there.  Prison is where he also first discovered Aislinn and since then he’s been watching over her, learning about her, until he finally gets the chance to claim her.  In some ways it’s a bit stalkerish, but with Damon it’s a more calculated move as everything he does is done methodically.  He’s a man used to getting what he wants and it’s clear that he wants Aislinn, doing whatever necessary to bring her to him.  Once he has her she’s not quite what he thought as she’s a tough woman who stands toe to toe with him instead of being the pampered princess he once thought.  As the story progresses readers discover he’s not quite what we thought either.  Yes, he’s a criminal, but he has a code and an honor about him that you can rely on. He’s a dangerous man, but also a protective one as seen by his quick capture of Aislinn from the danger getting ever closer to her.  He’s not the kind of man to blink but with Aislinn he was thrown a bit off-course and you could see the flashes of humor she brought out in him as well as his fear for her safety.  He’s a delicious man, suave with a bit of roughness around the edges.  He exudes sensuality and it made for a scorching connection with Aislinn and lots of sizzling interludes for readers.  He’s also a man of mystery and with each turn of the page we start to discover his secrets, secrets that will change Aislinn’s life irrevocably and put their future in doubt.  It all adds up to a complicated man full of conflicts, and flashes of vulnerability, that has me still dreaming of him.

From the moment I read the first sentence I was captivated by this tale, enthralled by the rawness and the sensuality.  Aislinn and Derek are a sizzling couple brought together under a shadow of secrets, lies, and danger and they practically jumped off the page in their sensual tug of war.  Along with a battle over their bodies was a battle for their hearts and souls, a battle that made for a rocky road to HEA as both had reasons to be untrusting.  Surrounding this crackling couple and their erotic interactions was a constant sense of danger from a drug cartel looking for retaliation.  This atmosphere kept me on edge, gave me a foreboding feeling that culminated in an ending that left me gutted and breathlessly waiting for the concluding installment.  Though some of this story’s secrets I figured out early on I still applaud Ms. Leigh for the tightrope she walked in crafting such a decadently delightful anti-hero as he’s the main draw of this story for me alongside its strong-willed heroine.  Readers looking for sexiness and suspense will definitely want to grab this gritty and emotional tale!

Tara Leigh is a multi-published author of steamy contemporary romance. A former banker on Wall Street, she graduated from Washington University and holds an MBA from Columbia Business School, but she much prefers spending her days with fictional boyfriends than analyzing financial spreadsheets. Tara currently lives in Fairfield County, Connecticut with her husband, children, and fur-baby, Pixie. She is represented by Jessica Alvarez, of Bookends Literary Agency. 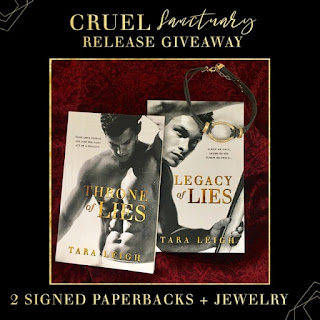